Iran's president has warned that foreign forces are threatening the security of the Gulf, after the US said it was deploying troops to the region. 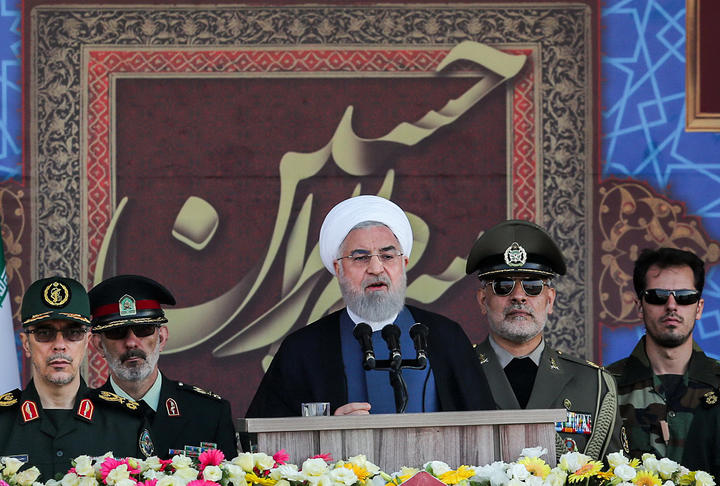 Hassan Rouhani said foreign forces had always brought "pain and misery" and should not be used in an "arms race".

The US is sending more troops to Saudi Arabia after an attack on Saudi oil facilities both nations blame on Iran.

Mr Rouhani also said Iran would present a new Gulf peace initiative at the United Nations in the coming days.

This year has seen continuing tension between the US and Iran, following President Donald Trump's abandonment of a deal aimed at limiting Iran's nuclear activities in return for the easing of sanctions.

The latest flashpoint was caused by drone and missile attacks on the Saudi oil facilities at Abqaiq and Khurais on 14 September.

Yemen's Iran-aligned Houthi rebels said they had carried out the attacks, but both the US and its ally Saudi Arabia - Iran's main regional rival - said Iran was behind them, something Tehran has strongly denied.

What has Mr Rouhani said?

He was speaking on the anniversary of the start of the 1980-1988 Iran-Iraq war, and alongside a series of military parades in Tehran and other cities.

"Foreign forces can cause problems and insecurity for our people and for our region," he said in the televised speech.

He called the deployment of such forces in the past a "disaster" and told them to "stay away".

"If they're sincere, then they should not make our region the site of an arms race... The farther you keep yourselves from our region and our nations, the more security there will be."

What about his peace initiative?

The president said it would be presented to the UN, which begins the main part of its general assembly in New York on Tuesday.

However, he gave no details, saying only that peace in the Strait of Hormuz could be achieved "in co-operation with various countries".

Mr Rouhani said Iran was "ready to let go of the past mistakes" made by regional neighbours.

"In this sensitive and important historical moment, we announce to our neighbours, that we extend the hand of friendship and brotherhood to them," he said.

The Houthi rebels in Yemen have also made a peace initiative, saying they would end all attacks on Saudi Arabia provided the kingdom and its allies did the same.

UN Special Envoy for Yemen Martin Griffiths said in a statement it was important to "take advantage of this opportunity and move forward with all necessary steps to reduce violence, military escalation and unhelpful rhetoric".

What is the US troop deployment?

The Pentagon announced on Friday that, in response to a Saudi request, there would be a moderate deployment to Saudi Arabia, not in the thousands and focused on air and missile defence.

Defence Secretary Mark Esper said: "We will also work to accelerate the delivery of military equipment."

The announcement brought a strong response from Iran's Revolutionary Guard Corps - an elite branch of Tehran's military designated a terrorist organisation by the US.

Commander Maj Gen Hossein Salami said: "Whoever wants their land to become the main battlefield, go ahead. Be careful, a limited aggression will not remain limited. We will pursue any aggressor."

What was behind the oil attacks?

The attacks had a serious, if not long-term, effect on Saudi oil supplies.

The Saudis have displayed what they say is debris from Iranian-made weapons but have not yet released their full findings.

The Houthis have launched numerous drone, missile and rocket attacks on the Gulf kingdom.

It stems from their conflict with a Saudi-led coalition which launched an air campaign in 2015 against the rebels, who had ousted President Abdrabbuh Mansour Hadi and seized the capital, Sanaa.

The suspicion of Iranian involvement in the oil attacks stems from the more wide-ranging regional rivalry with Saudi Arabia and the antagonism over the abandonment of the nuclear deal.

The US has also blamed Iran for attacks on two oil tankers in the Gulf in June and July, as well as on another four in May. Tehran rejected the accusations in both cases.