Mexico says it has successfully curbed the number of undocumented migrants crossing into the United States by 56 percent since May. 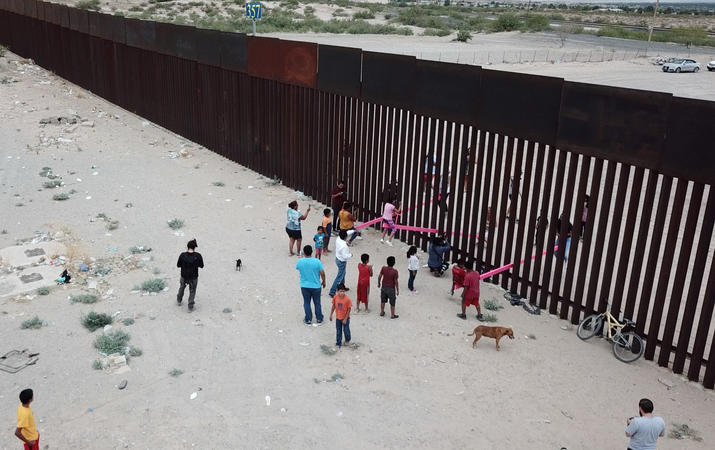 The two countries agreed in June to a 90-day window to reduce the flow of migrants crossing into the US.

President Donald Trump had threatened to implement tariffs on Mexican imports if they did not act to stem migration.

Officials, including Mr Ebrard, are set to travel to Washington next week to discuss their efforts.

"I don't expect there to be a tariff threat on Tuesday," Mr Ebrard said about the meeting.

What was the deal?

Mr Trump announced in June that the US had reached an 90-day agreement with Mexico to reduce migrant flows from Central America heading north.

The deal involved initiatives like closer bilateral co-operation and Mexico deploying thousands of National Guard troops throughout the country.

In exchange, a US threat to implement punitive tariffs was suspended.

Mr Trump had pledged import duties of 5 percent would come into place, and rise every month, if Mexico failed to act.

While drops in migration are typical during the summer months, officials have denied the decrease is due to seasonal trends.

"It's a direct result of the negotiations of this president and this administration specifically with our international partners," acting Customs and Border Protection (CBP) commissioner Mark Morgan said last month.

The latest figures for August are set for release next week, amid US media reports the number has been cut again.

The policy would require Mexico to take in asylum seekers heading for the US and process their claims on its own soil.

"The Mexican strategy is working," the AFP news agency quoted Mr Ebrard as saying. "We will not agree to be a safe third country ... because it goes against our interests. It is unfair to our country."

Mr Trump has not yet responded to the latest figures released by the Mexican government, but earlier this week praised their efforts.

"I want to thank Mexico, the Mexican government, their great President of Mexico, for helping us," he told reporters on Wednesday. "They're helping us in a very big way. Far bigger than anybody thought even possible."

Mr Trump has made a crackdown on illegal migration a key priority of his presidency since his 2016 election campaign.

His stance has led to frequent run-ins with Democrats in Congress, with particular flashpoints including the conditions within migrant detention facilities and funding for the president's long-promised border wall.

In February, Mr Trump declared an emergency on the US-Mexico border to free up federal funding.