US authorities will begin next week removing millions of immigrants who are in the country illegally, President Donald Trump has announced. 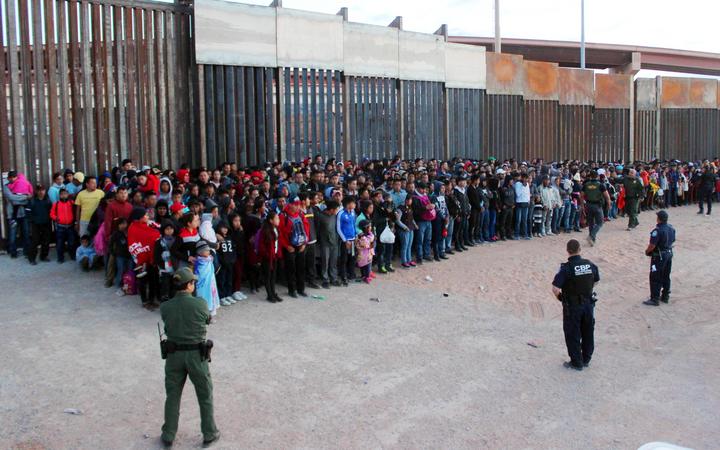 "Next week ICE will begin the process of removing the millions of illegal aliens who have illicitly found their way into the United States," Mr Trump tweeted, referring to the Immigration and Customs Enforcement agency.

"They will be removed as fast as they come in," he said. He did not offer specifics.

There are an estimated 12 million immigrants who are in the United States illegally, mainly from Mexico and Central America.

Under a deal reached with Washington earlier this month, Mexico has agreed to take Central American immigrants seeking asylum in the United States until their cases are heard in US courts.

The agreement, which included Mexico pledging to deploy National Guard troops to stop Central American immigrants from reaching the US border, averted a Trump threat to hit Mexican imports with tariffs.

On Saturday, Mexican police found 785 foreign nationals, many of them children, crammed into eight containers pulled by four trucks in the eastern state of Veracruz.

Officials say the migrants had paid thousands of dollars in their country of origin to be transported through Mexico, toward the United States.

Mr Trump also said in the tweet that Guatemala "is getting ready to sign a Safe-Third Agreement."

US Vice President Mike Pence suggested last week that Guatemala could receive asylum seekers from its neighbours as a so-called safe third country.

Details of the plan have not been made public, and Guatemala has not publicly confirmed talks that the US State Department said were taking place in Guatemala on Friday.

US rights group Human Rights First said, however, it was "simply ludicrous" for the United States to assert that Guatemala was capable of protecting refugees, when its own citizens are fleeing violence.

Mexico has agreed that if its measures to stem the flow of migrants are unsuccessful, it will discuss signing a safe third country agreement with the United States.

The Trump administration has also announced plans to cut hundreds of millions of dollars in aid to the three countries, after concerns in Washington that not enough was being done to curb immigration.