Demonstrations have been taking place across the UK against Boris Johnson's decision to suspend Parliament in the run-up to Brexit. 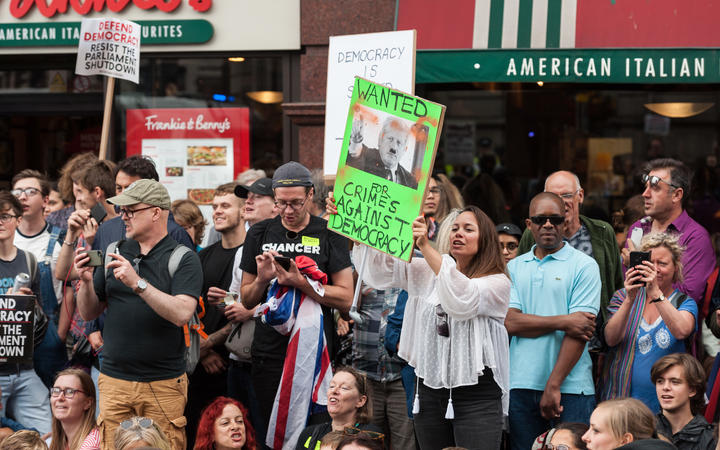 Thousands of protesters took to the streets in cities including Manchester, Leeds, York and Belfast.

Parts of central London were brought to a standstill, as people chanted: "Boris Johnson, shame on you."

A small group of counter-protesters, marching in support of the prime minister, also arrived in Westminster.

Mr Johnson's plan to prorogue Parliament prompted an angry backlash from MPs and opponents of a no-deal Brexit when he announced it on Wednesday.

If the prorogation happens as expected, Parliament will be closed for 23 working days.

Critics view the length and timing of the suspension - coming just weeks before the Brexit deadline on 31 October - as controversial.

Protests were held place in more than 30 towns and cities across the UK, including Edinburgh, Belfast, Cambridge, Exeter, Nottingham, Liverpool, Manchester and Birmingham.

In London, demonstrators stopped traffic in Whitehall and the West End.

They also staged a sit-down protest in the roads around Trafalgar Square, before marching to Buckingham Palace shouting: "Whose democracy? Our democracy."

The Met Police said it had made three arrests but gave no further details.

The Green Party said London Assembly member Caroline Russell was among those arrested.

Sian Berry, co-leader of the Green Party, tweeted she was "proud of Caroline standing up for democracy".

NHS pharmacist Bridie Walton, 55, said she had never been to a demonstration before, but joined the protest in Exeter to oppose Mr Johnson's plan.

"These are the actions of a man who is afraid his arguments will not stand scrutiny," she said. 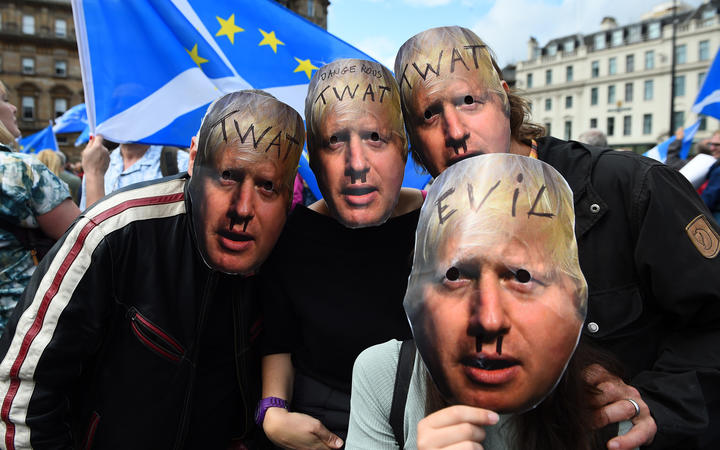 In Liverpool, Paula Carlyle said she was "proud" to stand alongside protesters "who voted both Remain and Leave".

"We will not be silenced," she said. "Without us you have no power and we will continue to show ours until Mr Johnson is stopped."

Named "Stop the Coup", the protests are organised by anti-Brexit campaign group Another Europe is Possible.

Speaking at a rally in Glasgow, Labour leader Jeremy Corbyn said the protesters' message to the prime minister was: "No way do you take us out without a deal."

"Demonstrations are taking place everywhere because people are angered and outraged about what is happening," he added.

Speaking from a stage near Downing Street, Ms Abbott told protesters: "We cannot allow Boris Johnson to shut down Parliament and to shut down the voice of ordinary British people."

Meanwhile in Bristol, former Liberal Democrat MP Stephen Williams said by suspending Parliament, Mr Johnson had left MPs "with about four days to make the most important decision of any of our lifetimes".

He said: "It's quite usual this time of year for Parliament to go in to a recess. It's perfectly correct and appropriate to prorogue Parliament.

"I think it's absolutely right that this prime minister and his government get the chance to set up their agenda."

The Jo Cox Foundation, which was set up in the wake of the Labour MP's murder in 2016, warned that anger over Brexit "should not spill over into something more dangerous".

Meanwhile, a petition against the prime minister's plan to suspend Parliament has received more than 1.5 million signatures.

And on Friday, former Tory Prime Minister Sir John Major announced he will join forces with anti-Brexit campaigner Gina Miller to oppose the decision to suspend Parliament in the courts.

He believes Mr Johnson's move to suspend Parliament is aimed at preventing MPs from opposing a no-deal Brexit.

The prime minister has dismissed suggestions that suspending Parliament is motivated by a desire to force through a no deal, calling them "completely untrue".

Foreign Secretary Dominic Raab said: "The idea this is some kind of constitutional outrage is nonsense."