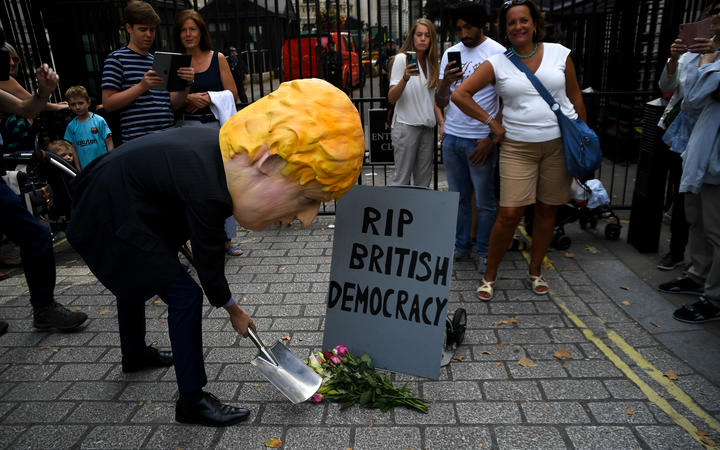 Parliament will be prorogued days after MPs return to work in September until mid-October.

The move, which had to be approved by the Queen, limits the time MPs have to pass laws to stop a no-deal Brexit, but also increases the chance that Mr Johnson could face a vote of no-confidence in his government, and possibly an election.

House of Commons Speaker John Bercow said it was a "constitutional outrage".

The Speaker, who does not traditionally comment on political announcements, continued: "However it is dressed up, it is blindingly obvious that the purpose of [suspending Parliament] now would be to stop [MPs] debating Brexit and performing its duty in shaping a course for the country."

"Make no mistake, this is a very British coup," John McDonnell, the second most powerful man in the opposition Labour Party, said. More than half a million people signed an online petition to object and the pound fell sharply.

Labour leader Jeremy Corbyn said the prime minister was doing a "smash and grab on our democracy to force through a no deal".

He said when MPs returned to the Commons next Tuesday, "the first thing we'll do is attempt legislation to prevent what [the PM] is doing", followed by a vote of no confidence "at some point".

Hundreds of protesters gathered in Westminster on Wednesday evening chanting "stop the coup" and carrying anti-Brexit placards and EU flags.

The demonstration, organised quickly online, started outside Parliament before spreading towards Downing Street.

"Democracy is so important. It's taught from such a young age as such a vital thing about being a British person and today just completely ruins that, tramples it and throws it out," said 17-year-old student Dylan Butlin, one of the protesters.

The BBC reported a "good-natured" crowd of protesters near parliament broke through barriers that separate live TV crews from members of the public, while others sat down on the street blocking traffic

Protests were also reported in Edinburgh and Cardiff. 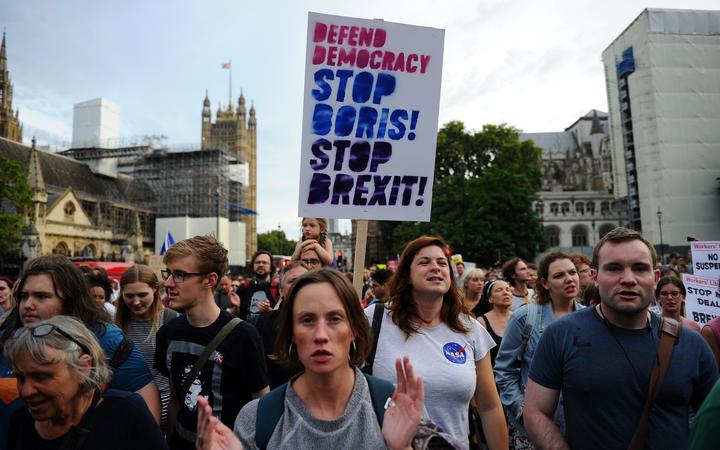 Anti-Brexit demonstrators march from the Houses of Parliament to Downing Street in protest at the suspension of Parliament. Photo: AFP

Senior Tory backbencher and former attorney general Dominic Grieve said the move by Mr Johnson could lead to a vote of no confidence - something opposition parties have left on the table as another option to stop no deal.

The move to suspend Parliament caused outcry across the political spectrum, while others have defended the plan.

Leader of the House Jacob Rees-Mogg, who was at the meeting with the Queen, said the move was a "completely proper constitutional procedure."

And Conservative Party Chairman James Cleverly said setting out a legislative programme via a Queen's Speech was what "all new governments do".

The move was cheered on by US president Donald Trump who tweeted his support.

However Scotland's First Minister Nicola Sturgeon said MPs must come together to stop the plan next week, or "today will go down in history as a dark one indeed for UK democracy".

The leader of the SNP in Westminster, Ian Blackford, accused Mr Johnson of "acting like a dictator", while First Minister of Wales Mark Drakeford said he wanted to "close the doors" on democracy.

A number of high profile figures, including former Prime Minister John Major, have threatened to go to the courts to stop it, and a legal challenge led by the SNP's justice spokeswoman, Joanna Cherry, is already working its way through the Scottish courts.

Earlier, Mr Johnson said suggestions the suspension was motivated by a desire to force through a no deal were "completely untrue".

He said he did not want to wait until after Brexit "before getting on with our plans to take this country forward", and insisted there would still be "ample time" for MPs to debate the UK's departure.