Police in Hong Kong have arrested 29 people after clashes in which volleys of tear gas were fired to break up anti-government protests. 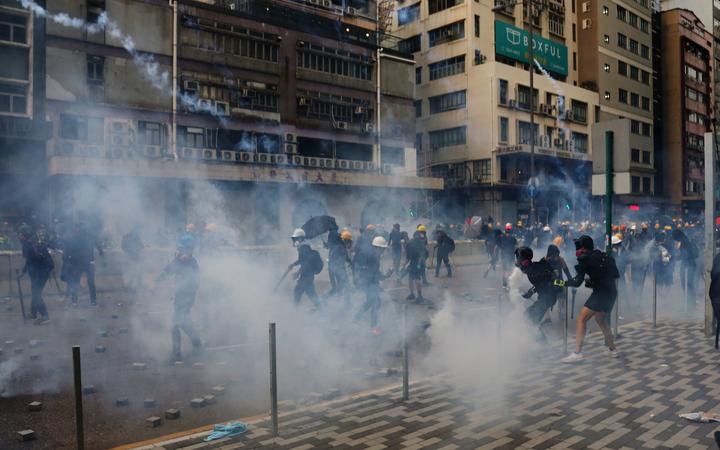 Riot police used tear gas and baton-charged protesters on Saturday, as a tense standoff turned violent on the 12th week of protests.

Thousands of demonstrators, many in hard hats and gas masks, marched through the industrial Kwun Tong area on Saturday and were met by police.

Some protesters launched stones from slingshots, prompting police to charge.

The demonstrations were sparked by an extradition bill and have since morphed into broader anti-government protests.

The protesters faced off with police for several hours outside a police station in Kwun Tong, having constructed barricades from bamboo poles and traffic barriers.

They demanded the removal of so-called smart lampposts that authorities say are there only to measure air quality, but protesters fear could be used to implement Chinese surveillance, including facial recognition technology.

The standoff came to an end after a hard core of protesters threw bricks and water bottles at police and officers responded by charging and beating some of the demonstrators with batons.

Several protesters were detained as officers swept through their ranks. 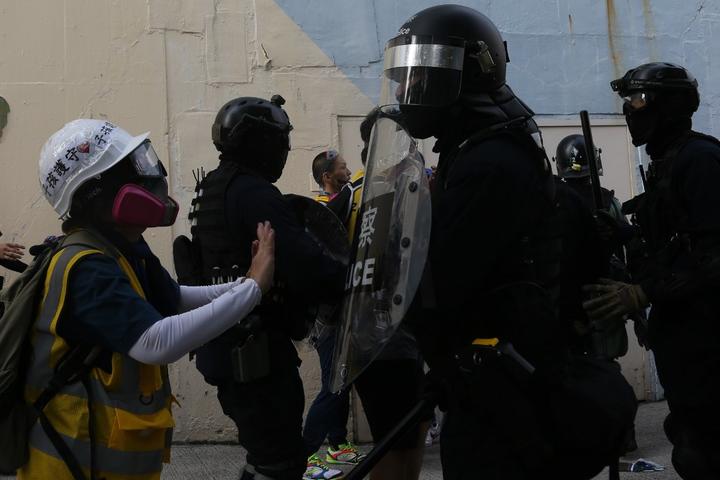 A woman tries to persuade police officers not to chase protesters. Photo: AFP

The violence broke an uneasy peace that had lasted a little more than a week. Hundreds of thousands of people had marched without violence last Sunday, as protesters sought to regain the moral high ground over police.

"I understand being peaceful will not solve the problem," a 19-year-old student protester called Ryan told the AFP news agency. "The government won't respond to peaceful protest," he said.

The violence on Saturday came shortly after a worker at the UK consulate in Hong Kong was released by mainland China, Chinese police in Shenzhen said.

Simon Cheng went missing on 8 August after being held at the border during a business trip to the city but has now returned to Hong Kong.

The protests were sparked by a now-suspended extradition bill that would have allowed Hong Kong to send criminal suspects to China for trial, but they have grown into a broader movement calling for democratic reform in the territory and an investigation into alleged police brutality against protesters.

Last Sunday, about 1.7 million people attended a pro-democracy rally in central Hong Kong, according to organisers. Police put the figure much lower, at 128,000, counting only those at an officially sanctioned rally in the city's Victoria Park.

There have been previous protests at Hong Kong International Airport as well as tourist spots in the city.

On Friday, YouTube announced it had shut more than 200 channels it said were part of a "co-ordinated" Chinese attempt to post material about the protests in Hong Kong.

Facebook and Twitter announced on Monday they had taken steps to block what they described as a state-backed misinformation campaign on social networks.

Twitter said it removed 936 accounts it said were being used to "sow political discord in Hong Kong".