Hundreds of thousands of people have held another day of pro-democracy protests in Hong Kong, amid increasingly severe warnings by Beijing. 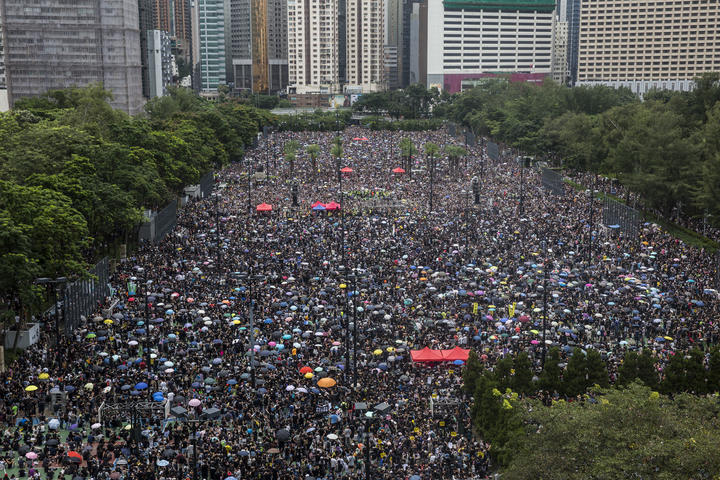 Protesters gather for a rally in Victoria Park in Hong Kong on Sunday in the latest opposition to a planned extradition law that has since widened into a call for democratic rights in the semi-autonomous city. Photo: AFP

Activists and police have clashed over the past 10 weeks, but this weekend's rallies have so far been peaceful.

The protests were sparked by an extradition bill, which has since been suspended by the Hong Kong government.

China, which has built up security forces in nearby Shenzhen, has likened the protests to terrorist activity.

Its chargé d'affaires in London has warned that Beijing "will not sit by and watch" if the Hong Kong government loses control of the situation.

The protest organisers, the Civil Rights Human Front, were denied authorisation for a march through the city, but police allowed Sunday's demonstration in Victoria Park.

One of the marchers, named as Mr Wong, told the BBC's Lam Cho Wai at the scene: "We have been fighting for more than two months, but our government has no response at all. We could just come out again and again."

Large crowds also marched in the nearby areas of Admiralty, Causeway Bay and Wan Chai in defiance of the police ban.

Organisers of the rally say 1.7 million people attended. The authorities have not given an overall figure.

A spokesman for the Hong Kong government said that although the demonstrations were generally peaceful, they had seriously affected traffic and caused much inconvenience.

He added that it was "most important to restore social order as soon as possible".

How have recent protests unfolded?

The violence has intensified in the past few weeks, and police have frequently fired tear gas and rubber bullets.

Last weekend activists occupied the airport, leading to hundreds of flights being cancelled. There were further clashes with police on Tuesday.

The turmoil has plunged one of Asia's leading financial centres into crisis. Many businesses remained closed on Sunday amid fears of further violence.

What is Beijing saying?

The Chinese government hardened its rhetoric following the airport unrest, condemning it as "behaviour that is close to terrorism".

It was the second time in a week that Chinese officials have publicly likened the protests to terrorist activity.

Some observers believe that the repeated use of such language suggests that China is losing patience with the protesters and signals that an intervention by Beijing is increasingly likely.

Thousands of armed police have been stationed across the border in Shenzhen.

"If Hong Kong's situation deteriorates to a point uncontrollable by the Hong Kong government, the central government will not sit by and watch," Chen Wen, the Chinese chargé d'affaires in London, told BBC Radio 4.

"We have enough powers and enough solutions to quell any unrest within the limit of basic law."

What is the movement about?

It was sparked by a bill that would allow extradition from Hong Kong to the Chinese mainland.

Critics argue that the proposal would undermine the territory's judicial independence and could be used to target those who speak out against the Chinese government.

The former British colony has a special status, with its own legal system and judiciary, and rights and freedoms not seen in mainland China.

The bill - announced by the government in February - was suspended following mass rallies in June. But the protesters want it withdrawn altogether.

They are also demanding democratic reform and an investigation into alleged police brutality.