Italy's Prime Minister Giuseppe Conte has said he will tender his resignation after a blistering attack on his coalition partner. 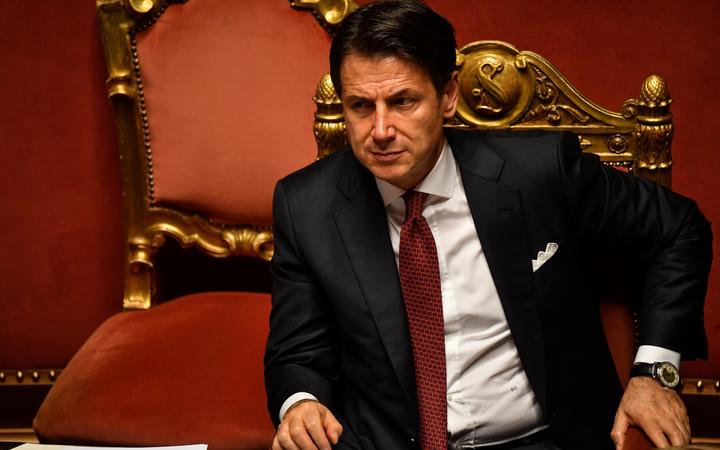 Mr Conte said Mr Salvini had been "irresponsible" in creating a new political crisis for Italy for "personal and party interests".

Mr Salvini, the leader of the nationalist League party, had tabled a no-confidence motion against Mr Conte.

He also said he could no longer work with his coalition partners Five Star.

The League and the anti-establishment Five Star Movement formed a coalition to govern just 14 months ago with Mr Conte as an independent as prime minister.

What did the PM say about Salvini?

Addressing the Senate on Tuesday, Mr Conte said the League leader, who was sitting beside him, had been "looking for a pretext to return to the polls" since his party's success in European elections in May.

In those elections, the League came top with 34 percent of the votes in Italy, whereas Five Star got about 17 percent.

Mr Conte warned that Mr Salvini had undermined the function of the government, "which stops here".

"It is irresponsible to initiate a government crisis. It shows personal and party interests," he said.

He also criticised Mr Salvini's use of "combining political slogans and religious symbols at rallies", calling it "unconscionable".

"I take this opportunity to announce that I will present my resignation as head of government to the president of the republic," he added.

What have the coalition leaders said?

"I did not speak ill of some colleagues, but as minister of the interior I delivered a safer Italy in the past year of government," Mr Salvini told the Senate.

"I am not afraid of the judgement of Italians," he added, referring to his earlier call for fresh elections.

He went on to say that while he had been accused of leading a party of "alleged fascists", the League was the only party pushing for a democratic vote. "Imagine that," he said, "the dictatorship that wants the vote of the Italian people".

In a Facebook post ahead of Mr Conte's address, Mr Di Maio said it was "the day when the League will have to answer for its faults for having decided to bring everything down, opening a government crisis in the middle of August".

He added that working with Mr Conte "was an honour".

Mr Conte was due to present his resignation letter to President Sergio Mattarella for approval after the Senate debate.

The next step is in the president's hands. Mr Mattarella could call early elections but he could also decide to announce discussions with party leaders on forming a new coalition government - which could begin as early as Wednesday morning.

While Mr Salvini is ahead in the polls, he is unlikely to have enough support to become prime minister. He indicated on Tuesday that he was prepared to work with his coalition partners to secure budget reforms ahead of early elections.

Five Star, meanwhile, are said to have been in discussions with the centre-left opposition Democratic Party (PD) about forming an alternative coalition.

Matteo Renzi, former leader of the PD and prime minister, has returned to frontline politics, saying Mr Salvini must be stopped.

He has called for a technocratic caretaker government.

The coalition talks represent a change of tack for Five Star. Mr Di Maio said recently that "nobody wants to sit at the table with Renzi". This uneasy relationship could make it difficult to form a government.