These are the international stories making news around the world today. 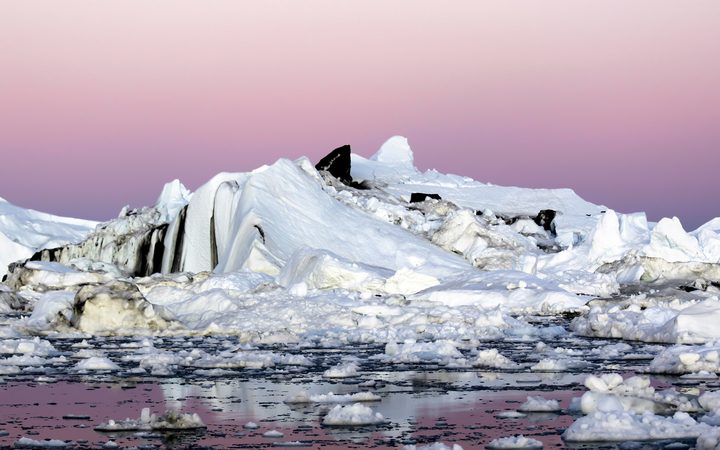 Tiny pieces of plastic have been found in ice cores drilled in the Arctic. Photo: Photo / AFP

In a tweet Mr Trump said he had "ZERO doubt" that Mr Xi could "humanely solve the Hong Kong problem".

He also tied the protests to a US trade deal with Beijing, in the face of ongoing trade tensions.

"Of course China wants to make a deal. Let them work humanely with Hong Kong first!" he tweeted.

Tiny pieces of plastic have been found in ice cores drilled in the Arctic by a US-led team of scientists, underscoring the threat the growing form of pollution poses to marine life in even the remotest waters on the planet.

The team drew 18 ice cores of up to 2 metres long from four locations, and saw visible plastic beads and filaments of various shapes and sizes.

"The plastic just jumped out in both its abundance and its scale," said Brice Loose, an oceanographer at the University of Rhode Island and chief scientist of the expedition, known as the Northwest Passage Project.

The scientists' dismay is reminiscent of the consternation felt by explorers who found plastic waste in the Pacific Ocean's Marianas Trench, the deepest place on Earth, during submarine dives earlier this year.

The Northwest Passage Project is primarily focused on investigating the impact of manmade climate change on the Arctic, whose role as the planet's cooling system is being compromised by the rapid vanishing of summer sea ice.

But the plastic fragments - known as microplastic - also served to highlight how the waste problem has reached epidemic proportions. The United Nations estimates that 100 million tonnes of plastic have been dumped in the oceans to date.

The researchers said the ice they sampled appeared to be at least a year old and had probably drifted into Lancaster Sound from more central regions of the Arctic.

Indian Prime Minister Narendra Modi said his decision to strip Indian-administered Kashmir of its special status would restore the region to its "past glory".

He said Kashmir will play an "important role" in India's development during his Independence Day speech on Thursday.

He said Article 370, the constitutional provision that granted it special status, had only encouraged corruption.

Mr Modi did not refer to the lockdown and communications blackout imposed in Kashmir since the decision last week.

He made the remarks during his Independence Day speech at the iconic Red Fort in the capital Delhi.

India celebrates Independence Day one day after Pakistan, which was partitioned from India in 1947.

During his own speech to mark the occasion, Pakistan Prime Minister Imran Khan criticised India for its Kashmir move.

"The world's eye is on Kashmir and on Pakistan. Whatever was done during the curfew by India, we will tell the international community that you are responsible. Whichever forum we get, I will be the ambassador and bring up Kashmir at every forum," he said.

Canadian Prime Minister Justin Trudeau has accepted a watchdog's report that he breached ethics rules by trying to influence a corporate legal case but refused to apologize, saying he had been trying to defend jobs.

"I fully accept this report ... I take full responsibility. The buck stops with the prime minister," said Mr Trudeau, adding that he nevertheless disagreed with some of Mr Dion's conclusions.

The scandal over SNC-Lavalin, which erupted in early February, battered Mr Trudeau's image as a youthful progressive at the helm of a government that had vowed to be open and transparent. He is the first Canadian prime minister found to have broken federal ethics rules.

The firm, a major employer in the politically important province of Quebec, wanted to take advantage of a 2018 law allowing it to escape with a fine rather than be prosecuted for bribing officials in Libya.

Mr Trudeau has admitted he tried last year to persuade former Justice Minister Jody Wilson-Raybould to reconsider the prosecutor's decision to press ahead with a trial.

Asian stocks stumbled and oil prices extended a punishing sell-off on Thursday, as investors feared an historic drop in long-term US bond yields could portend a recession globally.

Australian and New Zealand markets were also down, as spooked investors stampeded to the safety of sovereign debt and drove yields on 30-year Treasury bonds to all-time lows.

"The yield curves are all 'crying timber' that a recession is almost a reality and investors are tripping over themselves to get out of the way as economic recession hurts corporate earnings and stocks can drop as much as 20 percent," said Chris Rupkey, chief financial economist at MUFG Union Bank.

The only saving grace was that the sheer scale of the scare would be bound to alarm central banks everywhere and likely draw a policy response, especially from the US Federal Reserve.

The futures market was clearly expecting drastic action as it priced in a greater chance the Fed would have to cut rates by half a point at its September meeting.

Japan has been hit by heavy rain as the country braces for a severe tropical storm with hundreds of flights cancelled and large areas evacuated.

Storm Krosa is expected to make landfall later this evening on the southern island of Shikoku.

More than 400,000 people have been evacuated from the region while many trains were halted and highways closed.

Almost 700 flights have been cancelled, affecting travel during the summer holiday season.

Krosa is classified as a tropical storm, one notch below the typhoon category.

After landfall it is expected to move north toward the Sea of Japan.