Pakistan has announced plans to expel India's top diplomat and suspend trade with its neighbour, deepening a row between the countries over the disputed territory of Kashmir. 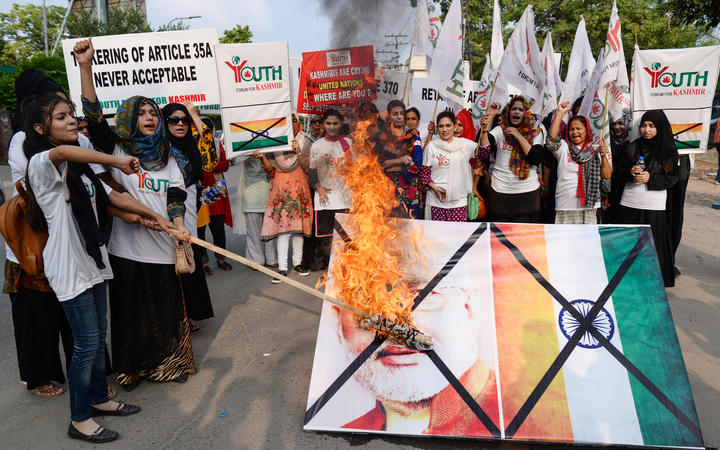 Activists of the Youth Forum for Kashmir group shout slogans as they burn a picture of Indian Prime Minister Narendra Modi and the Indian flag during a protest in Lahore. Photo: Photo / AFP

Indian-administered Kashmir has been on lockdown since the Indian government decided on Monday to strip the region of its special constitutional status.

Phone networks and the internet have been cut off since Monday.

Tens of thousands of troops have been patrolling the streets.

Instances of protest and stone-throwing have been reported, despite the communications blackout and a curfew.

Kashmiris in other parts of the country said that they were unable to get through to their families. Local leaders have also been detained.

India and Pakistan - both nuclear-armed states - have fought two wars over Kashmir, most recently clashing in a series of aerial attacks over the territory in February.

The Himalayan region of Kashmir is claimed in its entirety by both India and Pakistan, but they each control only parts of it.

There is a long-running separatist insurgency on the Indian side, which has led to thousands of deaths over three decades. India accuses Pakistan of supporting insurgents but its neighbour denies this, saying it only gives moral and diplomatic support to Kashmiris who want self-determination.

Under Article 370 of the Indian constitution, the state of Jammu and Kashmir had special dispensation to make its own laws - the basis for its complex relationship with India for some 70 years.

However, the Indian government is now revoking most of Article 370.

Pakistan is suspending all trade between the two countries.

It is expelling India's high commissioner (the equivalent of an ambassador) from Islamabad. Meanwhile, Pakistan's newly-appointed envoy, Moin-ul-Haq, was yet to start his role but now will not move to Delhi. 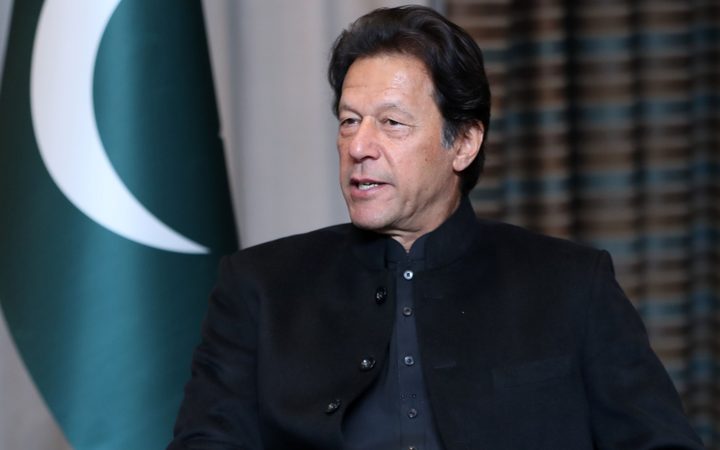 He also directed the armed forces to remain vigilant.

In addition, Pakistan is asking the UN Security Council to consider the dispute.

India and Pakistan have fought two wars over Kashmir since independence from British colonial rule in 1947.

Many people in Indian-administered Kashmir do not want it to be governed by India, preferring instead either independence or union with Pakistan.

The population of the Indian-administered state of Jammu and Kashmir is more than 60 percent Muslim, making it the only state within India where Muslims are in the majority.

Many Kashmiris think revoking Article 370 is an attempt to change the territory's demographic character, by allowing non-Kashmiris to buy land there. Before now, Indians from outside the state could be barred from settling or buying property.

While the current insurgency began in 1989, violence surged again in 2016, with the death of a young militant leader, Burhan Wani. Last year, more than 500 people were killed - including civilians, security forces and militants - the highest such toll in a decade.

Prime Minister Narendra Modi and his Hindu nationalist Bharatiya Janata Party have for a long time wanted to scrap Article 370 - a promise included in their manifesto for elections earlier this year.

They argued that Kashmir needed to be put on the same footing as the rest of India.

Once returned to power with an increased majority in May, the government lost no time in acting on its pledge.

UK Foreign Secretary Dominic Raab reportedly said he had spoken to India's foreign minister and "expressed some of our concerns around the situation and called for calm".

An official at the US State Department meanwhile denied reports the US was informed about India's plans.

"Contrary to press reporting, the Indian government did not consult or inform the US Government before moving to revoke Jammu and Kashmir's special constitutional status", the state department said.