‘This wouldn’t have happened to a white man’

The lawyer for a black man who was led down a street in a US city by rope behind two white police officers on horseback says she's never seen anything like it and that it wouldn't have happened to a white man. 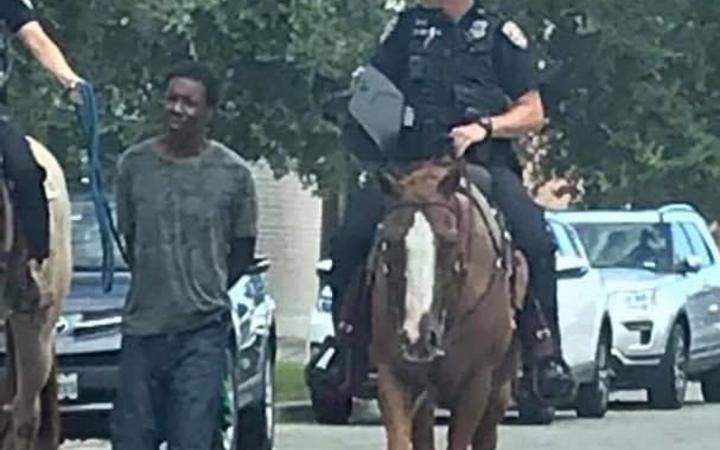 Texas police have apologised after an image of two white officers on horseback leading a handcuffed man by a rope caused an outcry online. Photo: Facebook / Andrienne Bell

Mr Neely's lawyer, Melissa Morris, told Checkpoint legal action may follow and that the image of Mr Neely invoked an image of slavery.

"These officers who were familiar with Donald knew he was compliant. They arrested him two weeks before ... for the same thing and he said that this time they came and asked him could they interview him regarding a dead body that they found in an alley and they took mucal swabs which are cheek swabs for DNA ... but they then told him he was arrested for trespass.

He had walked along because he did not want to be kicked or dragged by the horse, she said.

"He doesn't think that he was violated. He said they were nice and he doesn't feel like anything is wrong and everything will be all right."

She understand there were some situations where having someone walk with police was practical.

"But in this case, where it's broad daylight, 5.30 on a Saturday on the strand in Galveston I'm certain that they could have, if they tried, contacted a transport vehicle and had Mr Neely transported safely and with dignity."

While the policy that meant detainees could be walked might not be used after the incident, she said: "These officers who were employing racially insensitive and culturally insensitive practices are still employed there".

In a meeting with Donald Neely's family - just a short time ago - the city's black police chief said the officers showed poor judgement and department policy has changed to prevent the use of such a technique again.

Ms Morris wanted footage from the officers' body cameras and information about the entire incident released.

"What we want is the police to be held accountable to the community ... we don't know what is happening behind closed doors, this just happened to get national attention and now police are addressing it. This couldn't just be a one-time thing. It couldn't have just been something they decided to do this time."

Mr Neely's family wanted the officers responsible fired and they also wanted to know what happened to him in the 20 hours that he was held by police after the incident.

James Douglas from the civil rights organisation - the NAACP said: "When I looked at the picture I saw an utter disrespect for another human being. The first thing that came to my mind was this was 2019 and not 1819, If this individual had been white, this never would have happened."

The police department in Galveston, Texas, has apologised and said the officers showed poor judgement and that department policy had changed to prevent the use of such technique again.