Our galaxy, the Milky Way, is "warped and twisted" and not flat as previously thought, new research shows. 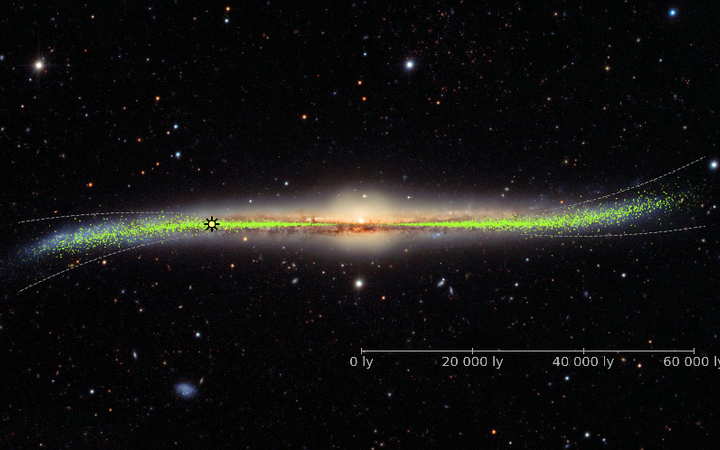 Analysis of the brightest stars in the galaxy shows that they do not lie on a flat plane as shown in academic texts and popular science books.

Astronomers from Warsaw University speculate that it might have been bent out of shape by past interactions with nearby galaxies.

The new three dimensional map has been published in the journal Science.

The popular picture of the Milky Way as the flat disc is based on the observation of 2.5 million stars out of a possible 2.5 billion. The artists' impressions are therefore rough approximations of the truer shape of our galaxy, according to Dr Dorota Skowron of Warsaw University.

"The internal structure and history of the Milky Way is still far from being understood, in part because it is extremely difficult to measure distances to stars at the outer regions of our galaxy," she said.

To gain a more accurate picture, Dr Skowron and her colleagues measured the distances of some of the brightest stars in the Milky Way, called Cepheid variable stars. These are massive young stars that burn hundreds, if not thousands, of times brighter than our own Sun. They can be so bright that they can be observed at the very edge of the galaxy.

Not only that, they also pulsate at regular intervals at a rate that is directly related to their brightness.

This enables astronomers to calculate their distance with great precision.

Most of the stars were identified by the Optical Gravitational Lensing Experiment (OGLE) at Las Campanas Observatory in Chile's southern Atacama Desert. Przemek Mroz, a member of the OGLE team, said that the results were surprising.

"Our results show that the Milky Way Galaxy is not flat. It is warped and twisted far away from the galactic centre. Warping may have happened through past interactions with satellite galaxies, intergalactic gas or dark matter (invisible material present in galaxies about which little in known)."

The Polish results support an analysis of Cepheid variable stars published in February in Nature Astronomy journal by astronomers from Macquarie University in Australia and the Chinese Academy of Sciences.