A member of a conservative US group has been fired after projecting a doctored version of the presidential seal at an event featuring President Donald Trump. 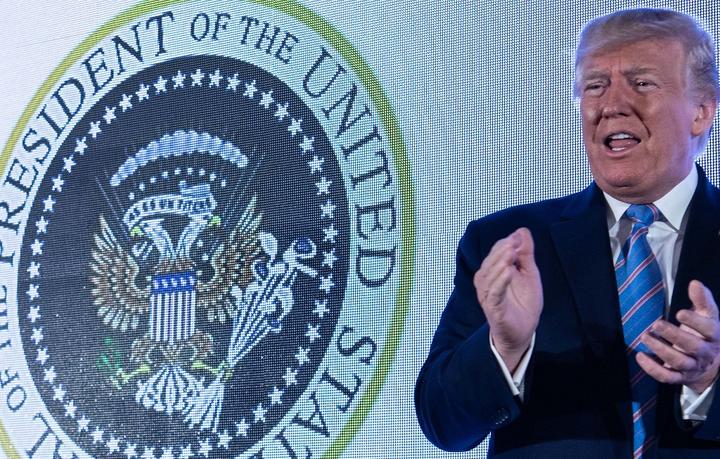 A representative for the group, Turning Point USA, told the Washington Post that the fake seal was a mistake, the result of a rushed online search.

But while the group called the slip-up "unacceptable", they maintained there was no "malicious intent".

So what's the story behind the doctored presidential seal?

When Mr Trump took to the stage at Turning Point USA's student summit, the president looked to be in his element, greeted by a crowd of adoring young conservatives.

After a 12-minute video detailing his journey to the White House, Mr Trump addressed the group, his remarks met with raucous applause.

"There's never been anything like this," Mr Trump said to the crowd.

But upon closer inspection, something about the president's presentation appeared amiss. First noted by the Washington Post, the seal that was flashed on screen as Mr Trump walked on stage had several calculated tweaks - all of which seemed to poke fun at the president.

Here's an indicator of where the changes were made to the #PresidentialSeal pic.twitter.com/PGHneIwGDK

Both the White House and Turning Point say they don't know how the doctored seal made its way on screen, and the conservative group denies any harmful intent.

Here's what's behind the unwelcome alterations.

A nod to Russia?

The focal point of the presidential seal - the bald eagle - has a storied past in the United States.

The animal has been the nation's emblem since 1789, selected for its allusions to strength and independence.

But the eagle that appeared on screen this week was not the eagle hand-picked by the Founding Fathers. Instead, the two-headed bird briefly projected next to Mr Trump bears a striking resemblance to the eagle featured on the Russian flag.

Two-headed eagles also appear on the flags of Serbia, Albania and Montenegro, but this particular seal-swap seems likely to reference Russia, as Mr Trump's close ties to Russia and President Vladimir Putin have been a running narrative of his presidency.

The alterations to the bald eagle don't stop there.

Instead of holding 13 arrows - a reference to the 13 original states - the eagle in the doctored seal clutches a set of golf clubs in its left talon.

The two-headed eagle's unusual bounty appears to be an ode to the president's well-documented love of golf.

According to the Washington Post, by October 2018 Mr Trump had visited his golf course in Virginia more than 40 times since taking office and has visited his private club in Bedminster, New Jersey on 70 separate occasions.

And Mr Trump's penchant for golf isn't cheap. According to analysis by the Huffington Post, as of May, his golf trips have cost taxpayers at least $102m in extra travel and security expenses.

The price tag attached to Mr Trump's beloved hobby may be implied by the goods in the eagle's right talon. Instead of the olive branch that appears in the legitimate presidential seal, the bald eagle clings on to a wad of cash.

Do you speak Latin?

The official presidential seal features the United States motto: "E pluribus unum", which translates from Latin to "out of many, one".

The doctored seal says "45 es un títere" which translates in Spanish to "45 is a puppet".

Mr Trump, the 45th president of the United States, has used analogies to puppets to explain his popularity.

"They're all puppets," he said to Time magazine of his competitors while campaigning for president in 2015. "With me, the one thing and one of the reasons I think I'm doing so well in the polls is the fact that I am definitely not a puppet."