Convoys of armoured vehicles and soldiers with assault rifles are patrolling gang-ridden streets in some suburbs of Cape Town, as authorities seek to quell escalating violence that has killed hundreds of people this year. 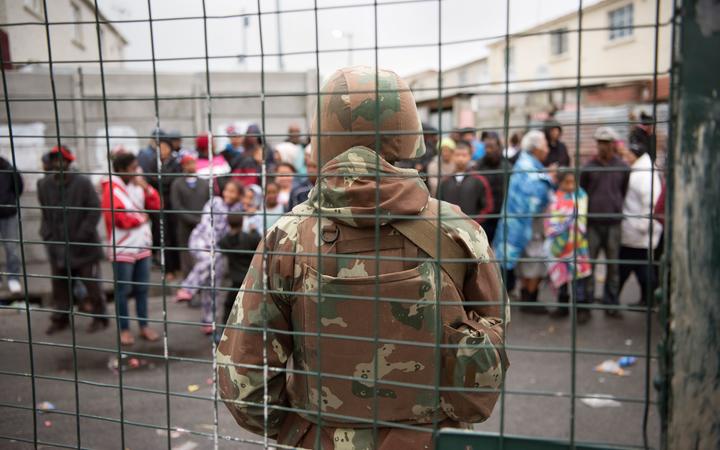 Residents gather in front of a solider from the South African National Defence Force at Hanover Park in Cape Town this week. Photo: Rodger Bosch/ AFP

Residents who gathered in Manenberg and Hanover Park to watch as soldiers assisted police on Thursday afternoon welcomed the new deployment to an area that officials liken to a war zone.

But by Friday morning, the troops had moved on, leaving many uncertain about what to expect next.

"The army is a good thing for now, but when they are gone the gang fights will start again," said Nizaam Sharmar, a 32-year-old construction worker.

Far from popular Cape Town tourist attractions, such as Robben Island and Table Mountain, a life-and-death battle is raging in the vast region known as the Cape Flats.

Bloodshed over the past seven months in mainly poor black and mixed-race areas has killed more than 2000 people, almost half gang-related, in a city of four million, Western Cape provincial officials have said.

Community activists say an increase in the availability of illegal firearms is a factor. Charges have been brought against some police officers accused of diverting weapons to criminal gangs.

Experts also point to a failure by authorities to address deep-seated poverty that persists in many black and mixed-race areas 25 years after white minority rule ended.

"In Cape Town alone, there are around 350,000 kids on the streets who are not in school, not in jobs, and they are causing trouble," said Don Pinnock, a criminologist at the University of Cape Town.

"And then the syndicates come in and say 'we'll pay you so much to distribute these things, to protect this area, take out those guys'." 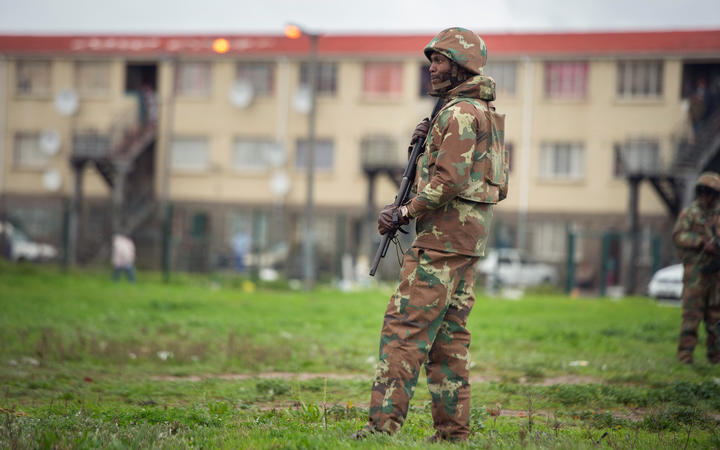 In the Cape Flats, a patchwork of apartheid-era townships and working class suburbs, high unemployment and drug abuse fuel a violent gang culture.

Graffiti from street gangs, with names such as the "Hard Living Kids" and "Young Americans", is daubed on walls in the area, where rows of council flats house families amid a tangle of washing lines strung up with clothing. Groups of young men, many with visible gang or prison tattoos, stand on street corners.

"If you here, then it's just about death and innocent people dying," said Dawn Pieters, whose 17-year-old son Trevor was shot dead by unknown assailants in Manenberg on 2 June.

"I don't know even how that gangster that shoots an innocent person feels ... Do they even have hearts?"

Ms Pieters was leaving a friend's home when shots rang out from a nearby shop, where her son had gone to buy sweets before watching a replay of his favorite team Liverpool contesting the Champions League final.

The motive for the killing is not known. Ms Pieters said her son, one of five children, was not affiliated with any gangs.

"He didn't do anything to nobody, that is the tragedy of it all," she said, tears welling in her eyes.

"Life is very cheap here in Manenberg. People get killed for nothing, for a packet of Tik," local entrepreneur Shafiek Charles said of the popular methamphetamine drug, which can sell for as little as 20 rand ($NZ2.12).

"For the children and youth, it is not easy," said Soraya Samson, a mother of two teenagers who lives four doors down from two drug dens and a known gangster's home. "When you come out of your gate you must always look - is it quiet or what is going on?"

"We just heard BANG, and I told my daughter to get down on the floor," she said. "When we came upstairs, we saw the bullet hole in the window. It went through the curtain and into the cupboard door."

In Mitchell's Plain, parents wearing yellow vests have banded together to escort children to and from school.

"They are protecting our kids from elements like gangsters," said Glenda Arendse, who coordinates the initiative dubbed "the walking bus".

"Time after time they get robbed by gangsters or mugged, by taking off their phones." 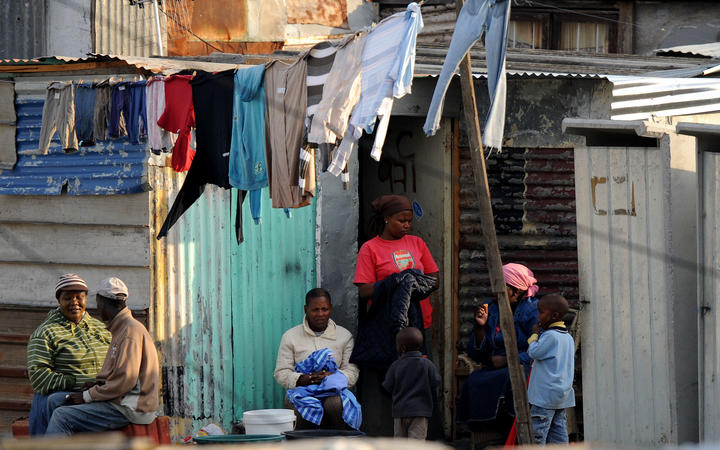 Many people live in poverty in simple huts in Cape Flats, on the outskirts of Cape Town in South Africa. Photo: Helmut Fohringer/ APA / picturedesk.com

In November, South African President Cyril Ramaphosa launched a new specialised anti-gang unit in Cape Town in a bid to curb gangland killings, but there has been limited success.

"The army was really the last resort, and we didn't call for it lightly," said Albert Fritz, the provincial minister responsible for community safety.

"But we've seen the escalation of people dying."

The South African National Defence Force said last Friday it would deploy a battalion with support elements to communities in the Cape Flats, including the shantytown of Philippi, where almost a dozen people were killed earlier this month.

"Innocent people are being shot and we need drastic change, but it's just like they showing their faces and then leaving," said 28-year-old mother of two Ledgeme, who did not want to give her full name for fear of reprisals.

In Khayelitsha, tens of thousands of people live cheek by jowl in a squalid sea of shacks - unnumbered homes on nameless streets, perfect conditions for criminals and a nightmare for police.

"Our troops are there to support the police," Gen Mgobozi said, adding that soldiers would help with checkpoints, controlled searches and patrols. "They determine where we go, and people must understand that."