A private dive team has found the last American warship sunk off the US east coast in WWII - solving a 75-year-old naval cold case. 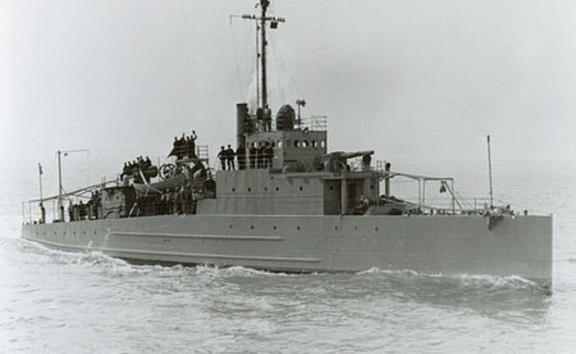 The sinking of the USS Eagle PE-56 was first deemed an accident until new evidence established it had been hit by a German submarine.

Its location remained a mystery until June 2018, when the ship was found five miles (8km) off the coast of Maine.

The Eagle lay 300ft (91m) below the surface of the Atlantic Ocean.

"This particular wreck was one of those conversations: 'wouldn't it be great if we could?'" said Ryan King, a member of the eight-person dive team.

But as Mr King began looking into the mystery-shrouded ship, finding the Eagle soon became something he "had" to do.

"It's one of those wrecks that just gets under your skin," said Mr King. "If it's not you, who else is looking?"

He and seven other divers combed the seabed for the ship for four years before it was found - 69 years after it sank to the bottom of the Atlantic, killing 49 of the 62 crew members on board.

They eventually teamed up with Gary Kozak, a specialist in undersea searches. Mr Kozak pointed the group towards several "targets" - possible GPS coordinates where the ship could be.

On a dive in June last year, two of the divers swam upon a "big wall of steel" at the bottom of the ocean.

"That wall turned out to be the Eagle PE-56," Mr King said, adding that he felt "just absolute awe" and that locating the ship was a team effort.

For the rest of the summer the group returned to the wreck, taking around 20 additional dives and gathering the evidence needed to prove the sunken ship was the missing Eagle. They worked closely with Robert Neyland, who leads the underwater archaeology branch of the Naval History and Heritage Command.

It would take the team under four minutes to dive to the wreck, with water temperatures plunging below 40F (4C). Ascents would last up to three hours so divers could avoid decompression sickness.

This particular warship, designed by Henry Ford for WWI, was the only Eagle boat lost during combat.

Its sinking was initially blamed on a boiler explosion, despite accounts from surviving crew members, who said they had spotted a German submarine before their ship sank.

In a rare move, the Navy overturned its initial ruling after declassified German documents confirmed that the Eagle had been hit by a torpedo.

The sinking was changed to a combat loss and all of the Eagle's crew members were posthumously awarded a Purple Heart for their service.

"History was rewritten," Mr Neyland said. The discovery is invaluable recognition for the crew of the Eagle "for having their ship shot at beneath them".

This fall, the Smithsonian Channel will air its documentary "Hunt for Eagle 56", chronicling the discovery by Mr King and the diving team.

"As soon as we found the wreck we really wanted to get this story told," Mr King said. "Not our story, the story of the Eagle."