New Orleans residents are being warned to secure their homes, stock up on supplies and prepare to huddle indoors with Tropical Storm Barry closing in. 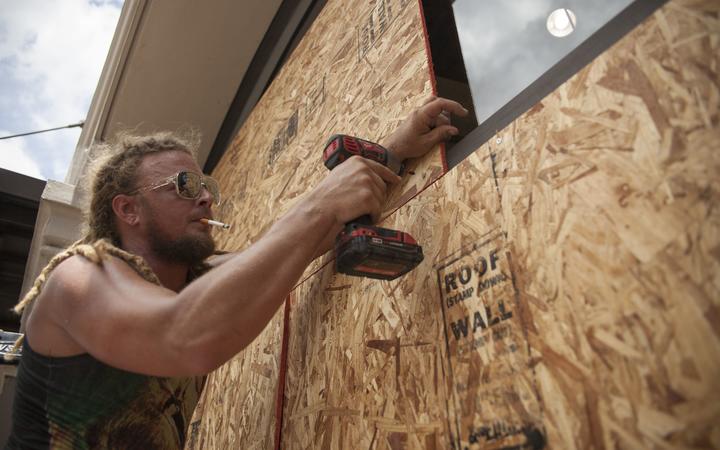 Barry - which is poised to make landfall as the first Atlantic hurricane of 2019 - had maximum sustained winds of 100 kmh as it churned through the northern Gulf of Mexico toward Louisiana.

Meteorologists warned that torrential rains are likely to unleash severe flooding, with up to 60cm of rain expected.

While New Orleans authorities refrained from ordering evacuations and advised residents to shelter in place instead, tourism officials reported an exodus of hotel guests checking out early on Friday.

Some airlines, including British Airways, have cancelled outbound flights from the city through Saturday.

Mandatory evacuations were imposed in flood-prone coastal areas of two neighboring parishes south of the city.

US President Donald Trump declared a state of emergency for Louisiana, and the region's oil production was scaled back by nearly 60 percent as energy companies evacuated offshore drilling facilities.

A performance scheduled for Sunday by the Rolling Stones at the Mercedes-Benz Superdome, which served as an emergency shelter during the Hurricane Katrina flood catastrophe of 2005, was postponed until Monday.

The impending storm was widely seen as a key test of the fortified flood defenses put in place following Katrina, which inundated much of the city and killed about 1800 people.

Barry is expected to cross the coastline southwest of New Orleans on Saturday morning. It is forecast to reach Category-One hurricane strength by then, with winds of at least 119 kph, the National Weather Service said.

The storm's flood potential, rather than its high winds, posed the greatest danger to the low-lying metropolitan landscape of New Orleans, a city virtually surrounded on all sides by rising waters.

"Major to ... record flooding will be possible."

Authorities were keeping a particularly watchful eye on the levee system built to contain the lower Mississippi River, which winds through the heart of New Orleans and was already well above flood stage from months of heavy upstream rainfall over the Midwest. 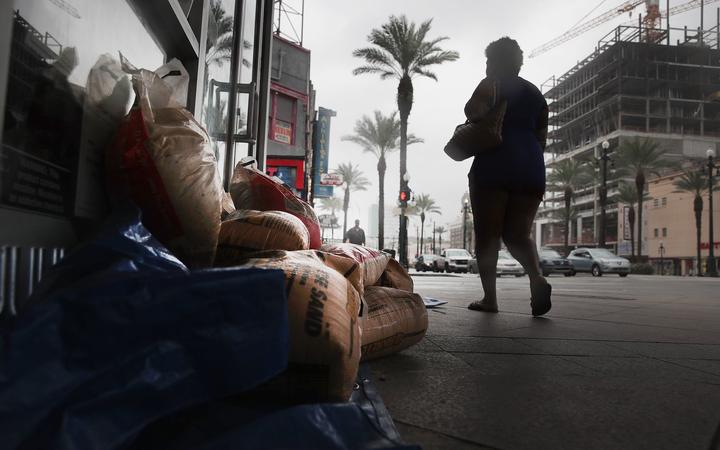 Sandbags are piled outside of a store in anticipation of Tropical Storm Barry. Photo: AFP

A coastal storm surge into the mouth of the Mississippi is expected to push its crest to 5.79m in New Orleans on Saturday, the highest level since 1950 and dangerously close to the top of the city's levees.

The brunt of Barry was expected to skirt the western edge of New Orleans, avoiding a direct hit. But Mayor LaToya Cantrell said 48 hours of heavy downpours could overwhelm pumps designed to purge streets and storm drains of excess water.

"There is no system in the world that can handle that amount of rainfall in such a short period," Ms Cantrell said on Twitter.

New Orleans was already saturated after thunderstorms drenched the city with a foot of rain on Wednesday.

"If it's worse than the other day, it'd be the worst week since Katrina," said musician Robert Harris, 61, polishing his trombone while sitting in a folding chair on a sidewalk.

While street flooding seemed probable, officials from the US Army Corps of Engineers insisted that significant breaching of the 20-foot-tall levees in New Orleans was unlikely.

All levee floodgates were being closed, along with a giant surge barrier erected after Katrina.

The chance of overtopping levees seemed greater farther downstream, where the levee walls are lower.

The level of Lake Pontchartrain, an estuary on the city's northern flank, rose by 3 feet on Friday, triggering the closure of a flood gate on a canal that breached during Katrina, said Derrick Boese, chief administrator for the local flood control agency.

Mandatory evacuation orders were issued for areas of Plaquemines Parish beyond the levees southeast of the city and for low-lying communities in Jefferson Parish, to the southwest.

New Orleans residents planning to ride out the storm flocked to supermarkets for bottled water, ice, snacks and beer, thronging grocery stores in such numbers that some ran out of shopping carts. Throughout the city, motorists left cars parked on the raised median strips of roadways hoping the extra elevation would protect them from flood damage.

City residents were asked to remain indoors after 8 pm on Friday.

Larry Gumpert, the 74-year-old owner of a pest-control company, said he planned to hunker down at home, cooking and catching up on household chores.

"The Army Corps has spent time, money and energy trying to fortify the city. This is a good test of what they have accomplished since Katrina. We'll see."