President Trump has invited North Korean leader Kim Jong-un - on Twitter - to meet him at the fortified frontier that divides North and South Korea. 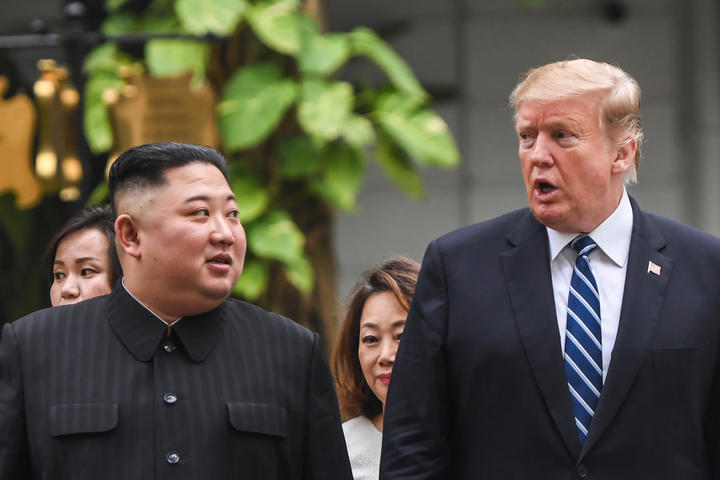 Kim Jong-un and Donald Trump during a break in talks at the second US-North Korea summit in Hanoi in February this year. Photo: AFP

North Korea has described it as a "very interesting suggestion".

Mr Trump is due in South Korea to discuss the flagging North Korea denuclearisation talks. He flies there from the G20 summit in Japan.

In an apparently spontaneous gesture, Mr Trump mooted a meeting with Mr Kim.

After some very important meetings, including my meeting with President Xi of China, I will be leaving Japan for South Korea (with President Moon). While there, if Chairman Kim of North Korea sees this, I would meet him at the Border/DMZ just to shake his hand and say Hello(?)!

Speaking at the G20 summit in Osaka, Mr Trump gave a few more details, telling reporters he decided on Saturday morning to "put out a feeler" to Mr Kim.

"If he's there, we'll see each other for two minutes and that's fine," he said in comments to reporters. He was speaking at the start of a working breakfast with Saudi Arabia's Crown Prince Mohammad Bin Salman.

He made the comments ahead of key talks with Chinese President Xi Jinping over a tit-for-tat trade war seen as a drag on global growth.

It remains unclear whether officials with Mr Trump were briefed in advance about his overture to the North Korean leader. 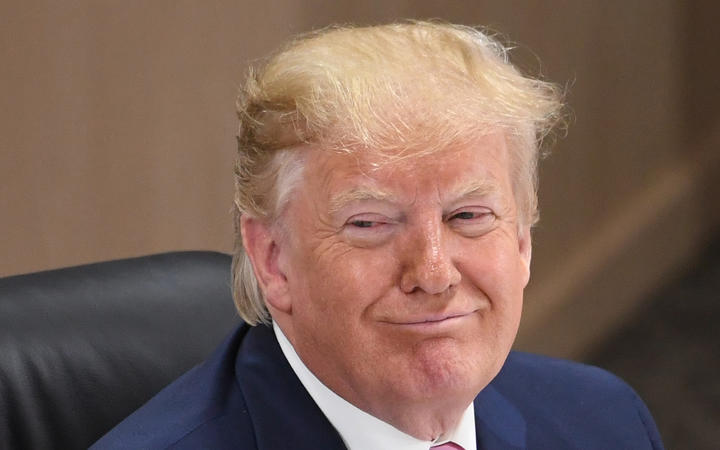 US President Donald Trump at the G20 summit in Osaka, Japan. Photo: AFP

Only a few hours later, North Korea reacted with a statement from Choe Son Hui, first vice-minister for foreign affairs.

"We see it as a very interesting suggestion, but we have not received an official proposal in this regard."

The statement adds such a meeting "would serve as another meaningful occasion in further deepening the personal relations between the two leaders and advancing the bilateral relations".

South Korea's presidency said nothing was yet confirmed and Seoul's hope for North Korea-US talks had not changed.

Mr Trump attempted to make a surprise visit to the demilitarised zone (DMZ) separating the two Koreas in November 2017, but was forced to abandon the plans due to bad weather.

How are North Korea-US relations?

The summit - their second after Singapore in June 2018 - ended abruptly without agreement on North Korea's progress towards denuclearisation, with Mr Trump walking away from what he saw as a "bad deal".

Mr Trump has repeatedly insisted that North Korea must dismantle its nuclear arsenal before economic sanctions can be lifted.

Since the Hanoi summit, North Korea has risked incurring the wrath of the Trump administration by testing several short-range missiles.

But Mr Trump, who once threatened North Korea with "fire and fury", has struck a more conciliatory tone in recent months, speaking warmly about Mr Kim.

Earlier this month, he told reporters that North Korea under Mr Kim's leadership had "tremendous potential".

And in May during a visit to Japan, Mr Trump described Mr Kim as a "very smart guy" and said he expected "a lot of good things" to come out of North Korea.

Given the apparent spontaneity of Mr Trump's tweet, the prospect of him meeting Mr Kim at the DMZ seems doubtful.

His previous meetings with Mr Kim were planned well in advance.

But last week, a South Korean official said Mr Trump was considering a trip to the DMZ, prompting speculation a meeting with Mr Kim could be possible.

US and South Korean officials have sought to play down a potential rendezvous between the two leaders.

In contrast, Mr Trump has alluded to possible encounters, including "speaking to him (Mr Kim) in a different form" and seeing each other "for two minutes".

Instead, the pair may speak over the phone or write to each other another letter, Vipin Narang, security studies professor at the Massachusetts Institute of Technology, told the Telegraph.

"I wouldn't expect a Trump-Kim meeting: it's too risky to do so with such little working level prep, since neither can afford a second failed meeting at home," he said.

What is Mr Trump expected to discuss in Seoul?

The South Korean president's office has said Moon Jae-in and Mr Trump will discuss "how to closely co-operate with each other to build lasting peace through complete denuclearisation of the Korean peninsula".

The US's special envoy on North Korea, Stephen Biegun, has been in Seoul recently for preparatory talks.

He said on Friday, in comments released through South Korea's foreign ministry, that the US was "ready to hold constructive discussions with North Korea".

Mr Moon, who has had two genial meetings with Mr Kim, has made resolving the North Korean issue the focal point of his presidency.

He was mediator for the first Trump-Kim summit and is keen to get talks back on track, though was accused by North Korean state media this week of "meddling" in the process

Mr Trump will also be keen to demonstrate concrete progress as campaigning gets under way for the 2020 US elections.

The future of the US-South Korean post-war security alliance is also likely be on the agenda in Seoul.

The US has about 30,000 personnel based in South Korea. Mr Trump has repeatedly said he would like to scale back this deployment.

The two countries' militaries conduct annual war games which infuriate North Korea, but they have scaled them back since ties warmed last year.