More than 400 schools in the Malaysian state of Johor are closed after 75 students experienced breathing difficulties and vomiting. 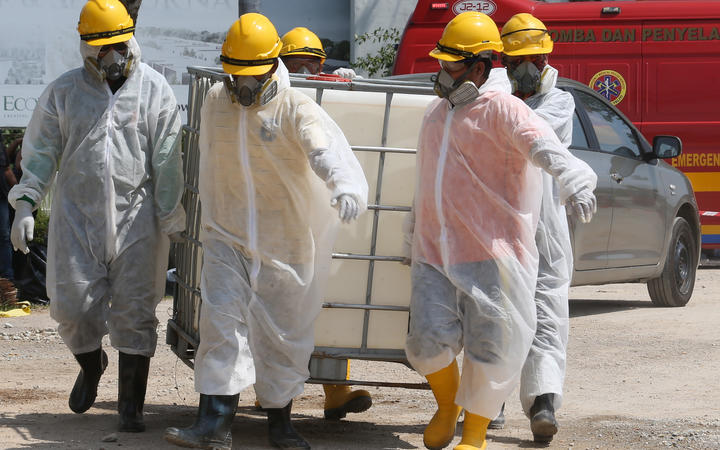 Schools in the industrial area of Pasir Gudang have been shut until Thursday as authorities investigate the latest air pollution incident to hit the state.

In March about 4000 people - mostly children - fell ill after chemical waste was illegally dumped in a river.

Authorities say the incidents are not linked.

More than 100 primary and secondary schools as well as 300 private kindergartens were among those ordered to be temporarily shut this week, reported state news agency Bernama.

Johor Chief Minister Dr Sahruddin Jamal said 75 students from 15 schools had complained of breathing difficulties and started vomiting. He said they had all been taken to hospital.

Dr Sahruddin had earlier told reporters it was not clear what had caused the latest bout of illness.

However, he said it was not linked to a previous pollution case in March which saw 111 schools shut and thousands of people ill after inhaling toxic fumes from the nearby Kim Kim river.

Malaysian Prime Minister Mahathir Mohamad vowed on Tuesday that "stern action" would be taken against those behind the incident.

He said the latest incident should not have "happened again... after the previous incident".

In March, thousands suffered breathing difficulties, chest pain and vomiting after up to 40 tonnes of chemical waste was illegally dumped into parts of the river.

Fire and rescue officials identified at least 15 different types of chemicals, including the colourless and extremely poisonous hydrogen cyanide.

Malaysia later charged three people - two Malaysians and one Singaporean - in connections with the incident.

"All waste from the Kim Kim [river] has been disposed," Dr Sahruddin said, according to news outlet The Malay Mail. "The cause of the latest case is still under investigation."