Israeli PM Benjamin Netanyahu has unveiled a new settlement in the occupied Golan Heights, named after US President Donald Trump. 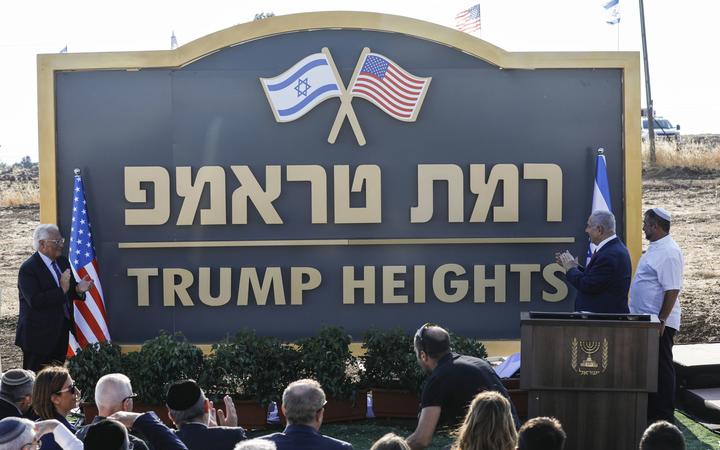 At a naming ceremony on Sunday, Mr Netanyahu said Trump Heights honoured Mr Trump for his decision to recognise Israeli sovereignty over the territory.

Building work has yet to begin but a sign bearing Mr Trump's name and US and Israeli flags was unveiled.

Critics called the move a publicity stunt with no legal authority.

Israel seized the Golan from Syria in the 1967 Middle East war. In March, the US became the first country to recognise Israeli sovereignty over the area since Israel effectively annexed it in 1981.

"This is a historic day," Mr Netanyahu said, hailing President Trump as "a friend of Israel".

US Ambassador David Friedman, who attended the ceremony, called the settlement "well deserved, but much appreciated". 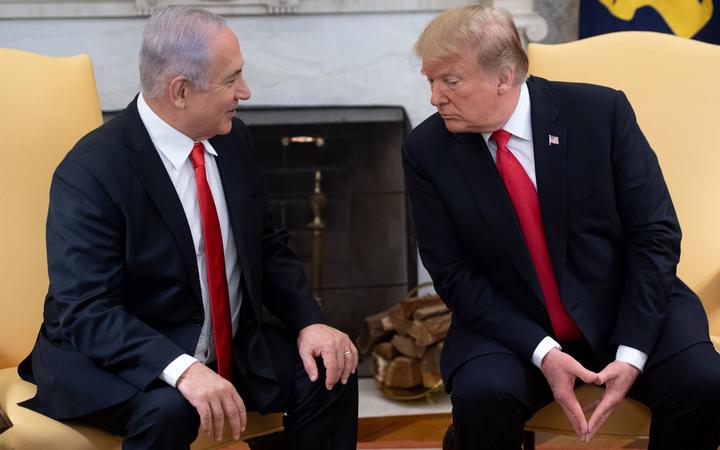 Benjamin Netanyahu and Donald Trump at the White House in March 2019. Photo: AFP

Israel's premier pledged in April to name a new settlement after Mr Trump, soon after the president overturned decades of US policy by recognising Israel's sovereignty over the Golan.

The region is located about 60km south-west of the Syrian capital, Damascus, and covers about 1000sqkm.

The new settlement is expected to be built near Kela in the northern Golan Heights.

But the resolution falls short of declaring the establishment of a settlement, and no money has yet been earmarked for construction.

Political opponents of the scheme have also noted that, legally, no new localities can be established before Israel's elections in September.

"Anyone who reads the fine print in this 'historic' decision will understand that this is nothing more than a nonbinding, fake policy," former cabinet secretary Zvi Hauser told the Times of Israel.

"Let's hope President Trump does not know that his name is being used for this public relations exercise," he added.