US President Donald Trump has angrily lashed out at Democratic leaders' claims he is engaged in a "cover-up". 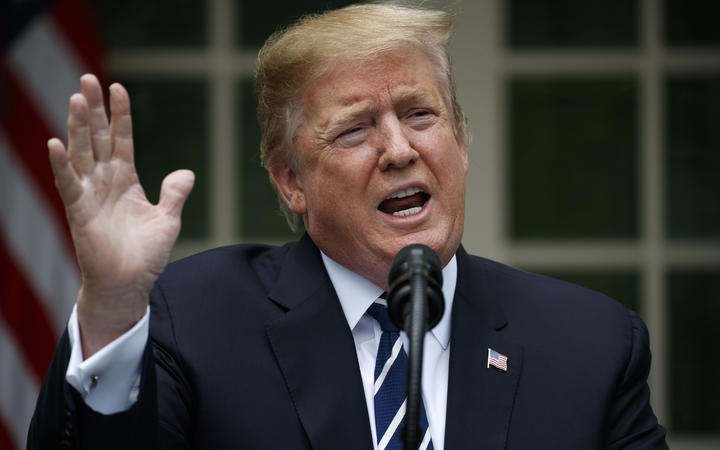 Donald Trump delivers a statement in the Rose Garden after cutting short a meeting with senior Democrats. Photo: AP

"I don't do cover-ups," the Republican president said in an unscheduled statement from the White House.

The president spoke minutes after cutting short a planned meeting with the two top Democratic leaders on Capitol Hill.

The trio were due to discuss spending on aging US roads and bridges, a rare possible area of bipartisan agreement between the White House and its political antagonists.

The president then appeared in the Rose Garden to make a surprise statement, condemning "phoney investigations" by Democrats.

Mr Trump also charged his political opponents with "abuse" and railed against their invoking of "the big i word" - impeachment.

According to CBS News, Mr Trump walked into the meeting with Mrs Pelosi and Mr Schumer and did not shake either's hand or sit down.

An unnamed source familiar with the confrontation said Mr Trump told the House speaker that her comments earlier in the day about a cover-up were "terrible".

The president told them Democrats needed to end congressional investigations against him before he would discuss anything else, then abruptly left the room. 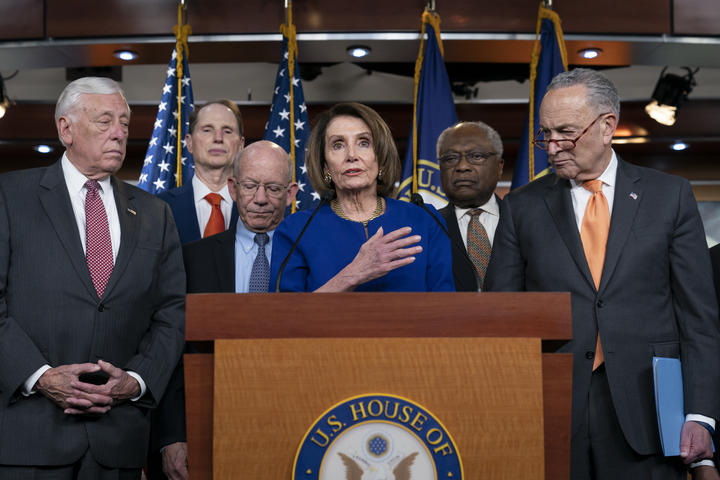 In a news conference immediately following Mr Trump's, Mrs Pelosi said the president "wasn't really respectful of the Congress and the White House working together".

Mr Schumer added: "We were interested - we are interested in doing infrastructure. It's clear the president isn't. He is looking for every excuse."

The New York senator accused Mr Trump of "running away".

"When we got in the room, the curtains were closed," Mr Schumer said.

"There was a place for him at the front so he could stand and attempt to tell us why he wouldn't do infrastructure, and of course, then he went to the Rose Garden with prepared signs that had been printed long before our meeting."

After the Mueller investigation concluded, Donald Trump and his advocates cheered what they saw as a cloud over the White House finally lifting.

It turns out, however, the political weather is still gloomy.

Congressional Democrats have picked up the mantle of the inquiry, issuing a flurry of subpoenas.

Now Mr Trump, in what was clearly a pre-planned response, is pushing back.

Co-operation and investigation, the president asserts, are mutually exclusive. Hopes of a legislative infrastructure deal have been dashed. Of greater immediate concern, however, are the status of negotiations on approving a new spending plan and raising the debt ceiling.

If Republicans in Congress follow the president's lead and dig in their heels, a new round of budget crises could be on the way.

An infrastructure plan appeared to be the best way for the president and Democrats to enact substantive legislation that they could take credit for on the 2020 campaign trail.

If the current course continues, however, the two sides will instead be fighting over who should shoulder the most blame.

Democrats on Capitol Hill have launched a number of oversight inquiries into Mr Trump, stemming from a special counsel report into alleged Russian meddling in the 2016 US presidential election.

Robert Mueller's investigation did not establish any conspiracy between the Trump campaign and Kremlin, but listed repeated instances of possible obstruction of justice by the president.

Democrats, who control the House, have been in a legal tussle with the Department of Justice over their demands for an unredacted version of the Mueller report.

On Wednesday, House Intelligence Committee chairman Adam Schiff said the department had reached an agreement to turn over some counterintelligence reports from the inquiry.

Democrats were keen to hear from Mr McGahn as he had told investigators of feeling pressured by the president to fire Mr Mueller.

Also this week, a federal judge ruled that Mr Trump could not block a subpoena ordering his accounting firm to turn over his financial records to Congress.

As Mr Trump stonewalls congressional investigations, Mrs Pelosi has been trying to tamp down increasing clamour among her fellow Democrats for impeachment proceedings.

On Wednesday, she met members of her party in a closed-door session and argued the time was not right for impeaching the president.

It was as she emerged from this caucus meeting that Mrs Pelosi angered the president by suggesting to reporters that he was involved in a cover-up.

The House leader has also said she believes the president is "goading" Democrats into pushing for impeachment.

A freshman Democratic congresswoman, Katie Hill, told the Associated Press after Wednesday's meeting that impeachment was "becoming an inevitability" with every act of defiance from the president.

Impeachment would need to be approved by two-thirds of the Democratic-controlled House, but it would stand virtually nil chance of passing the Republican-controlled Senate.

Only two other presidents have been impeached: Andrew Johnson and Bill Clinton.