Researchers say that they have pinpointed the major sources of a mysterious recent rise in a dangerous, ozone-destroying chemical. 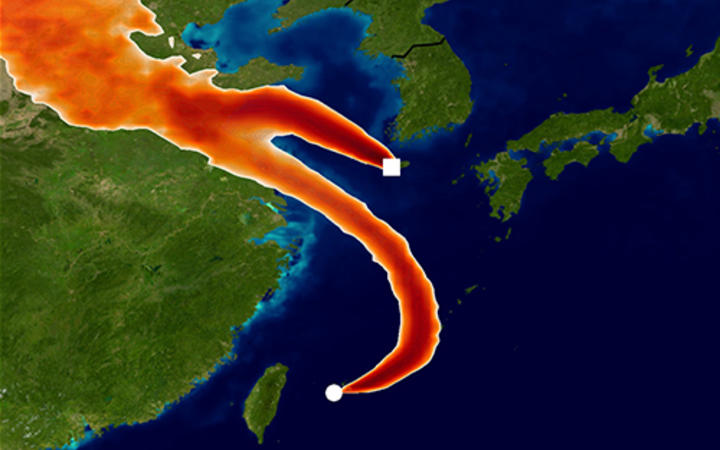 Simulated atmospheric transport of CFC-11 to the Gosan and Hateruma monitoring sites using the Met Office NAME model. The colours show areas where emission sources would strongly impact the CFC-11 measurements for one day in December 2014. This model information has been used to infer a rise in emissions from eastern China, starting around 2013. Photo: Supplied / University of Bristol

CFC-11 was primarily used for home insulation but global production was due to be phased out in 2010.

But scientists have seen a big slowdown in the rate of depletion over the past six years.

This new study says this is mostly being caused by new gas production in the north-east provinces of China.

CFC-11 is also known as trichlorofluoromethane, and is one of a number of chloroflurocarbon (CFC) chemicals that were initially developed as refrigerants during the 1930s.

However, it took many decades for scientists to discover that when CFCs break down in the atmosphere, they release chlorine atoms that are able to rapidly destroy the ozone layer which protects us from ultraviolet light. A gaping hole in the ozone layer over Antarctica was discovered in the mid 1980s.

The international community agreed the Montreal Protocol in 1987, which banned most of the offending chemicals. Recent research suggests that the hole in the Northern Hemisphere could be fully fixed by the 2030s and Antarctica by the 2060s.

When was the CFC problem discovered?

CFC-11 was the second most abundant CFCs and was initially seen to be declining as expected.

However in 2018 a team of researchers monitoring the atmosphere found that the rate of decline had slowed by about 50 percent after 2012.

That team reasoned that they were seeing new production of the gas, coming from East Asia. The authors of that paper argued that if the sources of new production weren't shut down, it could delay the healing of the ozone layer by a decade. 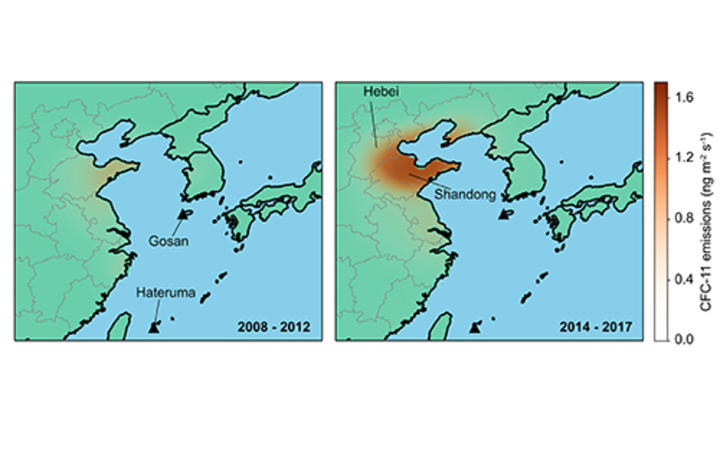 Emissions inferred from atmospheric observations at Gosan and Hateruma monitoring stations show an increase from eastern China between the periods 2008-2012 (left) and 2014-2017 (right). The emission rise is primarily from Shandong and Hebei and surrounding provinces. Photo: Supplied / University of Bristol

What did investigators find on the ground?

Further detective work in China by the Environmental Investigation Agency in 2018 seemed to indicate that the country was indeed the source. They found that the illegal chemical was used in the majority of the polyurethane insulation produced by firms they contacted.

One seller of CFC-11 estimated that 70 percent of China's domestic sales used the illegal gas. The reason was quite simple - CFC-11 is better quality and much cheaper than the alternatives.

So what does this latest study show?

This new paper seems to confirm beyond any reasonable doubt that some 40-60% of the increase in emissions is coming from provinces in north eastern China.

Using what are termed "top-down" measurements from air monitoring stations in South Korea and Japan, the researchers were able to show that since 2012 CFC-11 has increased from production sites in eastern China.

"This new study is based on spikes in the data on air that comes from China," lead author Dr Matt Rigby, a reader at the University of Bristol, told BBC Inside Science.

"Using computer simulations of the transport of these gases through the atmosphere we can start to put numbers on emissions from different regions and that's where we come up with this number of around 7000 tonnes of extra CFC-11 emissions coming out of China compared to before 2012.

"But from the data, all we just see are the ultimate releases to the atmosphere, we don't have any information on how that CFC-11 was used or where it was produced, it is entirely possible that it was manufactured in some other region, some other part of China or even some other country and was transported to the place where they are making insulating foams at which point some of it could have been emitted to the atmosphere."

Where are the rest of the emissions coming from?

The researcher are not sure. It's possible that the missing emissions are coming from other parts of China, as the monitoring stations just can't see them, They could also be coming from India, Africa or South America as again there is very little monitoring in these regions.

Does this have implications for climate change?

Yes - the authors say that these CFCs are also very potent greenhouse gases. One tonne of CFC-11 is equivalent to around 5000 tonnes of CO2.

"If we look at these extra emissions that we've identified from eastern China, it equates to about 35 million tonnes of CO2 being emitted into the atmosphere every year, that's equivalent to about 10 percent of UK emissions, or similar to the whole of London."

Will China clampdown on the production?

The Chinese say they have already started to clampdown on production by what the term "rogue manufacturers". Last November, several suspects were arrested in Henan province, in possession of 30 tonnes of CFC-11.

Clare Perry from the Environmental Investigations Agency (EIA) said that the new findings re-affirmed the need to stamp out production.

"Unless the production of the chemical is shut down it will be near impossible to end the use and emissions in the foam companies."

The study has been published in the journal Nature.