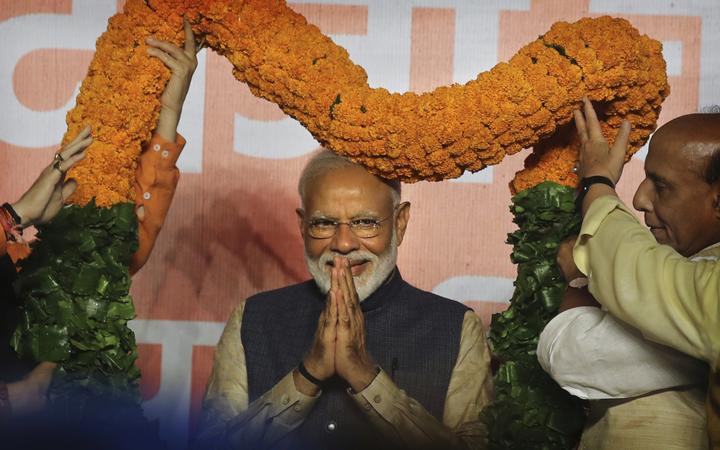 His Bharatiya Janata Party (BJP) looks set to win about 300 of the 543 seats in parliament, in what Mr Modi hailed as "a historic mandate".

The main opposition alliance, which is headed by Rahul Gandhi's Congress party, has admitted defeat.

The vote had been widely viewed as a referendum on the prime minister's Hindu nationalist politics.

"We all want a new India. I want to bow down my head and say thank you," Mr Modi said in a victory address to BJP supporters on Thursday evening.

More than 600 million people voted in a marathon six-week process.

Mr Modi has not just exceeded exit poll predictions but has also won a larger share of the vote than the 2014 elections, partial results show.

At a press conference in Delhi, Mr Gandhi conceded the general election as well as his Amethi seat in Uttar Pradesh, which he had held since 2004 and his family had held for decades.

Partial and declared results show Mr Modi's BJP is projected to win 300 seats on its own, and combined with the party's allies, this number reaches nearly 350.

The main opposition Congress party is expected to win fewer than 60. 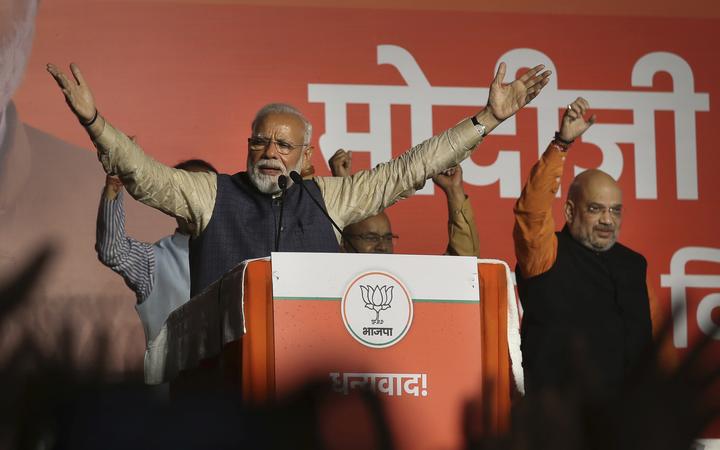 A party or coalition needs at least 272 seats to secure a majority in the 543-member lower house of parliament, or Lok Sabha.

The Congress, which won just 44, suffered its worst defeat in 2014 and with its allies took up just 60 seats in the lower house.

This year 900 million voters were eligible to take part in seven rounds of voting, making it the largest election the world has ever seen.

The final result may not be known for several hours or longer. 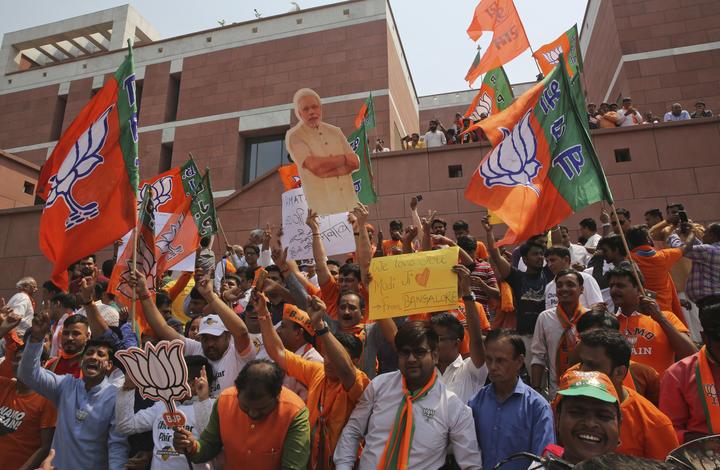 "We will never give up our ideals, our humility and our culture," he said.

Thank you India! The faith placed in our alliance is humbling and gives us strength to work even harder to fulfil people's aspirations.

I salute every BJP Karyakarta for their determination, perseverance & hardwork. They went home to home, elaborating on our development agenda.

Party members cheered, banged drums and set off fireworks when the results started to emerge. As the prime minister arrived, he was showered with rose petals.

Foreign Minister Sushma Swaraj, a senior BJP leader, said in a tweet that the BJP had won a "massive victory".

Pakistani Prime Minister Imran Khan congratulated Mr Modi for his victory on Twitter, and said he looked forward to working with him for "peace, progress and prosperity in South Asia".

The BBC's Zubair Ahmed in Delhi said Congress Party staff, who had been hoping for a much improved performance, looked lost for words.

Where were the key contests?

The BJP alliance is projected to win more than 50 percent of the vote in the huge northern state of Uttar Pradesh, which sends more MPs to parliament than any other state (80).

This took election observers by surprise as the party was expected to be seriously challenged by a tie-up between two powerful regional parties, the Bahujan Samaj Party (BSP) and Samajwadi Party (SP), which had previously been bitter rivals.

The BJP is doing better than expected in West Bengal, where it is projected to take 17 parliamentary seats - up from two in the last polls.

Four of India's five southern states - Andhra Pradesh, Telangana, Tamil Nadu and Kerala - have long eluded the BJP and appear to have done so again in this election. They look set to take just three of the 91 seats up for grabs.

In this part of the country, the party contests few seats, relying instead on alliances with regional heavyweights.

What challenges does Modi face?

In his victory speech, Mr Modi said there were only two castes in India now. "The poor and those who want to work to bring them out of poverty. We need to empower both."

Growing unemployment and fears of a recession will see Mr Modi face demands to provide jobs for the millions of young people entering the labour market in coming months.

Under his first term, India's economy - the world's sixth largest - lost some of its momentum. A leaked government report this year put the unemployment rate at the highest it's been since the 1970s.

Farmers in India will also be hoping he will prioritise the agricultural industry, after a crop glut and declining commodity prices saw their incomes stagnate.

Many saw this election as a battle for India's identity and the protection of minorities. A strident - and at times violent - Hindu nationalism has become mainstream in the past five years, with increased attacks against minorities, including the lynching of dozens of Muslims accused of smuggling cows.

National security was also put into the spotlight after a suicide attack by a Pakistan-based militant group killed at least 40 paramilitary police in Indian-administered Kashmir in February. India then launched unprecedented air strikes in Pakistan, prompting it to respond in kind and bringing the two countries to the brink of war.