A Chinese propaganda song about the ongoing Sino-US trade war is getting a lot of interest - and raising a few eyebrows - on Chinese social media. 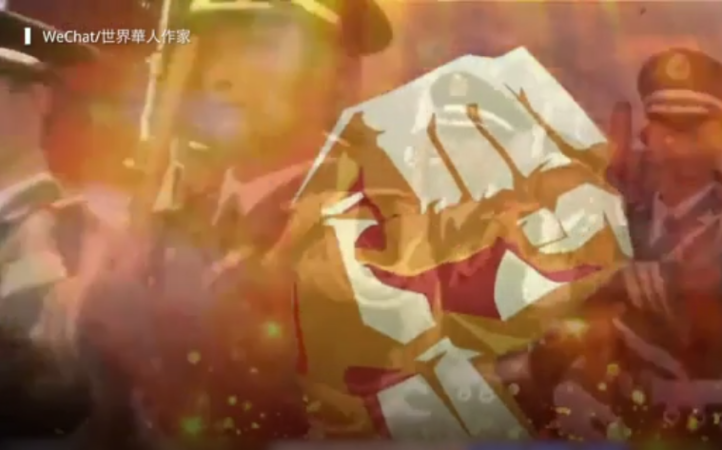 The Trade War song features a vow to "beat it out of its wits". Photo: Photo / Wechat

Trade War, written by a former Chinese official, appeared on popular mobile messenger WeChat on Friday and has been viewed hundreds of thousands of times. It has also inspired an accompanying music video.

The song features strongly worded criticism of the US and a vow to "beat it out of its wits".

China is no stranger to propaganda songs. Karaoke is popular in China and Beijing knows that songs are an effective way of conveying official thinking to young people.

And with tensions escalating between China and the US, after the latter raised tariffs on some $US200 billion ($NZ307bn) worth of Chinese products, the song has been an effective way for China to build its soft power and stir anti-US sentiment.

It attracted significant attention on the WhatsApp-like platform, and a subsequent post showing the song as a music video went viral. The three-minute video shows an animated fist set against flames, while scenic photographs of Beijing flash across the screen.

It is set to the tune of a well-known wartime anti-Japanese propaganda film, Tunnel Warfare, and sounds like an army chant.

"I chose Tunnel Warfare because that is reminiscent of the similar situation that China is facing today," Mr Zhao told Bloomberg News. "Since the trade war broke out, I felt the urge to do something," he said.

He adapted the lyrics for the recent deterioration in trade relations with the US:

"Trade war, trade war, not afraid of the outrageous challenge.

"A trade war is happening over the Pacific Ocean, the Belt and Road has even become a segment.

"If the perpetrator wants to fight, we will beat him out of his wits."

More than 100,000 WeChat users have watched the video, and it has generated a great deal of discussion on Sina Weibo - China's version of Twitter.

"His words have filled people with passion," commented one WeChat user whose post received more than 100 likes.

Many on the platform praised Teacher Zhao. One user got 1000 likes for calling him a "heroic patriotic warrior".

Discord of US imperialism

Others praised the song as a way of "hitting" the US. "Those US imperialists and their wolfish ambitions," posted one user.

But some Weibo users voiced bemusement that China was promoting a song about a trade war. "This thinking makes us no better than North Korea," wrote one.

Trade War is not the first song that the state has released to promote China's strength amid disputes with other nations, and China has had a track record of producing songs with an anti-US line.

In May last year, official media promoted a song called For Your Attention, featuring a five-member boyband singing about domestic brands and how they are "the pride of China".

The song promoted the idea that China was a rising superpower, and that people no longer needed to buy products from overseas.

And in May 2017, official media widely promoted a multilingual rap by Sichuanese group CD Rev called No to the THAAD - criticising South Korea for working with the US to deploy a now-abolished anti-missile system.

The state has shown it's not afraid to dabble in different genres, and rap in particular has proven popular. During the National Congress in October 2017, the most important political event in the Chinese calendar, China released at least four rap songs.

One, The Letter, signified the changes that China had seen under President Xi Jinping's leadership. The song helped promote Mr Xi's legacy to young Chinese people and solidify his premiership, which he will now hold for another five years, at least.