Japan's Emperor Akihito has declared his abdication in a historic ceremony at the Imperial Palace in Tokyo. 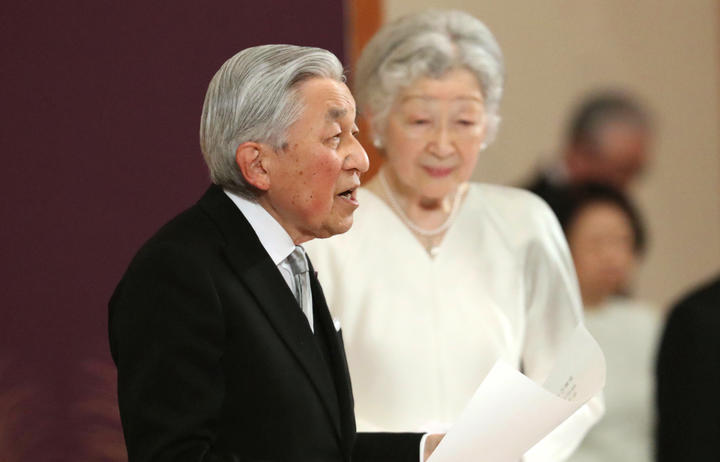 Japan's Emperor Akihito, accompanied by Empress Michiko, speaks during the ceremony of his abdication in front of other members of the royal families and top government officials at the Imperial Palace in Tokyo on 30 April, 2019. Photo: Japan Pool via AP

In his last public address as emperor, Akihito handed over the symbols of power and thanked the public for their support during his 30-year reign.

The 85-year-old was given permission to abdicate after saying he felt unable to fulfil his role because of his age and declining health.

He is the first Japanese monarch to stand down in more than 200 years.

While the emperor holds no political power, he serves as a national figurehead.

Akihito has endeared himself to many Japanese people during his reign as he has interacted with those suffering from disease and disaster.

On the morning of the abdication, the emperor took part in a Shinto ceremony to report his plans to the mythological ancestors of Japan's imperial family. 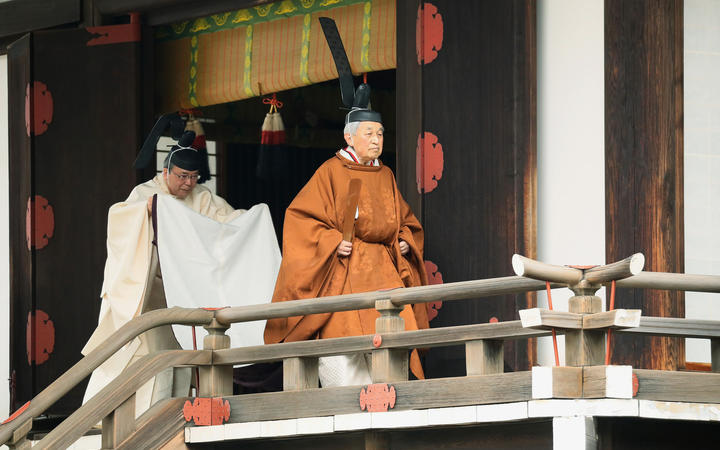 Japan's Emperor Akihito, right, leaves after a ritual to report his abdication to the throne, at the Imperial Palace in Tokyo on 30 April, 2019. Photo: Japan Pool via AP

The main "Ceremony of the Abdication" took place in a state room of the Imperial Palace in front of about 300 people including Prime Minister Shinzo Abe, Crown Prince Naruhito, and Crown Princess Masako.

Imperial chamberlains carried the state and privy seals into the hall, along with a sacred sword and a jewel which are considered symbols of the imperial family.

In a short ceremony, Prime Minister Shinzo Abe addressed the emperor, saying: "While keeping in our hearts the path that the emperor has walked, we will make utmost efforts to create a bright future for a proud Japan that is full of peace and hope."

Then, in his final speech as emperor, Akihito, wearing a Western-style morning coat, said he "wished Japan and the world peace and happiness".

"I am deeply grateful for the people that accepted me as a symbol and supported me," he said.

"I sincerely wish, together with the empress, that the Reiwa era which begins tomorrow will be a stable and fruitful one.

"I pray, with all my heart, for peace and happiness for all the people in Japan and around the world."

After helping his wife, Empress Michiko, down the steps of the ceremonial platform, the emperor bowed towards the gathered officials, then left the room.

Why did the emperor decide to abdicate?

In a rare speech in 2016, he said that he feared his age would make it hard for him to carry out his duties and strongly hinted that he wanted to stand down.

Opinion polls showed that the vast majority of Japan sympathised with him, and a year later parliament enacted a law that made his abdication possible.

Who is the incoming emperor?

Prince Naruhito will become Japan's 126th emperor - and will officially lead the country into the new Reiwa era. It will mark the end of the current Heisei era, which began when Akihito ascended the throne in 1989.

The 59-year-old Oxford University graduate is married to Crown Princess Masako. Their only child, Princess Aiko, was born in 2001.

Why is the Japanese monarchy important?

It's the oldest continuing hereditary monarchy in the world. Legends date it back to about 600BC. 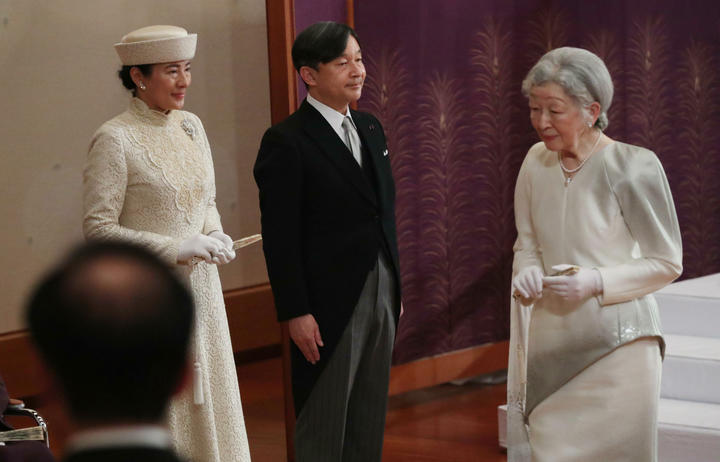 The emperors used to be seen as gods, but Hirohito - the father of Akihito - publicly renounced his divinity as part of Japan's surrender at the end of World War II.

It was Emperor Akihito who helped repair Japan's post-war reputation.

Previous emperors rarely interacted with the public, but Akihito redefined the role - and has come to be known for his compassion.

In 1991, two years after he ascended the throne, Akihito and the empress broke with norms and knelt down to speak to people affected by a volcanic eruption in Nagasaki.

Akihito also took up the role of a diplomat, becoming an unofficial ambassador for Japan and travelling abroad extensively.

While Tuesday's was the first Japanese abdication in 200 years, it wasn't so rare historically.

According to Japan's state broadcaster NHK, about half the country's emperors or empresses have done the same, and it happened frequently from the 8th Century to the 19th Century.

How are Japanese people marking the handover?

The Golden Week break - Japan's annual spring holiday - has been extended to a record 10 days to mark the occasion.

When Emperor Akihito succeeded his late father, the country was in mourning, but this time people will be going on holidays, to cinemas, or staying at home to watch the events on TV.

Many said they would miss the departing emperor, who will now hold the title "Joko", which means "grand emperor" or "Emperor Emeritus".

"I think the emperor is loved by the people," Morio Miyamoto told Reuters news agency. "His image is one of encouraging the people, such as after disasters, and being close to the people."

"The emperor worked very hard for 30 years so I hope the handing over of the baton to the new emperor will go smoothly," Mikiko Fujii told the agency.

"I'm sad but also hopeful about the next era. I hope it will be a peaceful, gentle period for the second half of my life," said Masatoshi Kujirai, on his way to a Shinto shrine to mark the day.