A gunman has opened fire at a synagogue in California, crowded with Sabbath worshippers, leaving one woman dead and wounding three other people, police say. 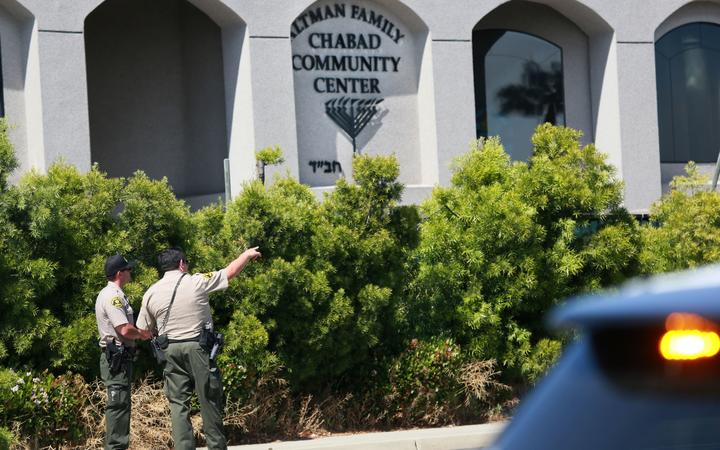 San Diego Sheriff deputies look over the Chabad of Poway Synagogue after a shooting. Photo: AFP

A 19-year-old man has been arrested after the attack at Poway, north of the city of San Diego.

A person identifying themselves as John Earnest posted an anti-Jewish screed online about an hour before the attack. In the post he described himself as a nursing school student and praised the suspects accused of carrying out deadly attacks on mosques in Christchurch last month and at the synagogue in Pittsburgh on 27 October.

He also said those attacks had inspired him.

California State University, San Marcos, confirmed Earnest was a student on the dean's list and said the school was "dismayed and disheartened" that he was suspected in "this despicable act".

He also claimed credit for setting fire to a mosque in Escondido, a town about 25-kilometres north of the Poway synagogue.

The synagogue had been hosting a Passover celebration when the shooting took place, reports said.

Police have not suggested a motive but US President Donald Trump said the attack "looks like a hate crime".

The shooting comes six months after a gun attack killed 11 people at the Tree of Life synagogue in Pittsburgh. It was the worst anti-Semitic attack in recent US history.

"During the shooting, four individuals were wounded and transported to Palimar hospital," he said. "One succumbed to their wounds. The other three are in stable condition."

Mayor Steve Vaus said the rabbi had been shot in the hand.

How did the attack happen?

Sheriff Gore said officers were called to the Chabad synagogue just before 11:30am local time after the man opened fire with an "AR-15 type" assault rifle.

He said an off-duty border patrol officer fired at the suspect as he fled the scene in a vehicle, but did not hit him.

The suspect was later arrested by another officer, added San Diego chief of police David Nisleit.

"He clearly saw the suspect's vehicle, the suspect jumped out with his hands up and was immediately taken into custody." he said.

"As the officer was placing this 19-year-old male into custody, he clearly saw a rifle on the front passenger seat of the suspect vehicle."

US Vice-President Mike Pence condemned the "evil and cowardly" shooting.

The New Zealand Jewish Council said it was deeply shocked and saddened by the attack, and Jewish people in this country were feeling more anxious than ever about their safety.

The council's spokesperson, Juliet Moses, said security had been a concern for years, and synagogues in Auckland and at New Zealand's only Jewish school were already guarded.

However, in the current climate the community is feeling increasingly vulnerable and anxious.

Ms Moses said she understood the Californian shooter was motivated by the Christchurch terror attacks.

"There's a manifesto that has apparently been released that's been attributed to him and apparently the manifesto mentions that he was inspired by the Christchurch gunman."