Environmental activists glued themselves to the London Stock Exchange and climbed onto the roof of a train at Canary Wharf on the final day of protests aimed at forcing Britain to take action to avert what they cast as a global climate cataclysm. 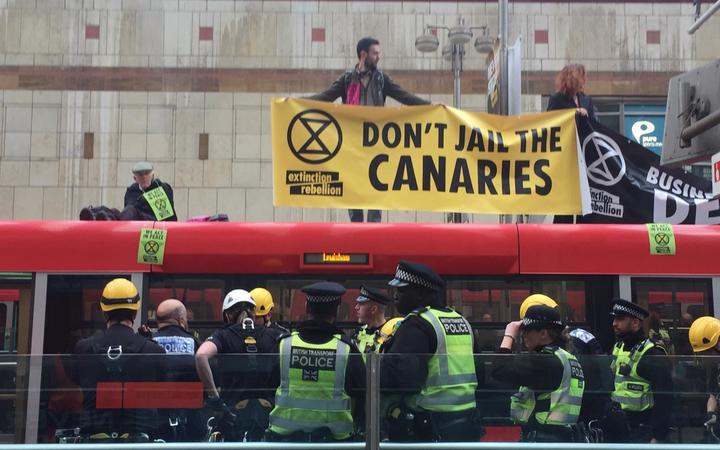 The Extinction Rebellion group has caused mass disruption in recent weeks across London, blocking Marble Arch, Oxford Circus and Waterloo Bridge, smashing a door at the Shell building and shocking lawmakers with a semi-nude protest in parliament.

At the London Stock Exchange's headquarters, six protesters dressed in black suits and red ties were blocking the revolving doors of the building. They held signs reading "Tell the truth" and "You can't eat money". 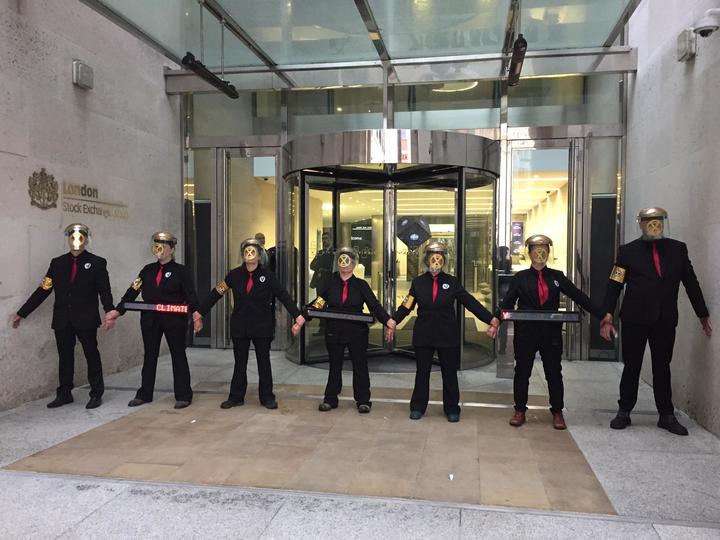 The protesters barricaded the entrance to the London Stock Exchange today. Photo: Supplied

At the Docklands Light Railway (DLR) station in Canary Wharf, five protesters from the group climbed aboard a train and unfurled a banner which read: "Business as usual = Death". One glued herself to a train.

"It's bizarre we have to do this in order for governments to listen to the scientists," said Diana Warner, 60, who glued her hand to the train.

"I've got children who are grown up so I can do this, so I'm doing it for everyone who can't," Warner said.

In the past 11 days, the group has brought iconic parts of central London to a standstill in what activists have described as the biggest act of civil disobedience in modern British history.

Extinction Rebellion protests have also held across the world during April, including in the United States, Canada, France, Belgium, Sweden, the Netherlands, Germany, Switzerland, Spain, Colombia, Australia, and New Zealand, where protests were held in seven different parts of the country. 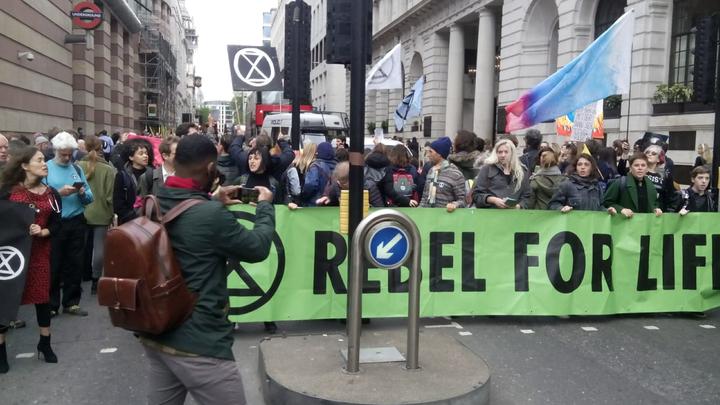 British police said 1088 arrests have been made since the main protests began. The final day of protests is focusing on the international financial sector, which has made London its home.

"Extinction Rebellion to focus on the financial industry today," the group said in a statement. The "aim is to demand the finance industry tells the truth about the climate industry and the devastating impact the industry has on our planet."

The group advocates non-violent civil disobedience to force governments to reduce carbon emissions and avert what it says is a global climate crisis that will bring starvation, floods, wildfires and social collapse.

They are demanding the government declare a climate and ecological emergency, reduce greenhouse gas emissions to net zero by 2025 and create a citizen's assembly of members of the public to lead on decisions to address climate change.

In 2017, total United Kingdom greenhouse gas emissions were 43 percent lower than in 1990 and 2.6 per cent lower than 2016, according to government statistics.

However, they promised more protests in the future, saying direct action was the only way to bring the issue to public attention.