Extinction Rebellion activists took over part of the Natural History Museum as the climate change protest entered its second week. 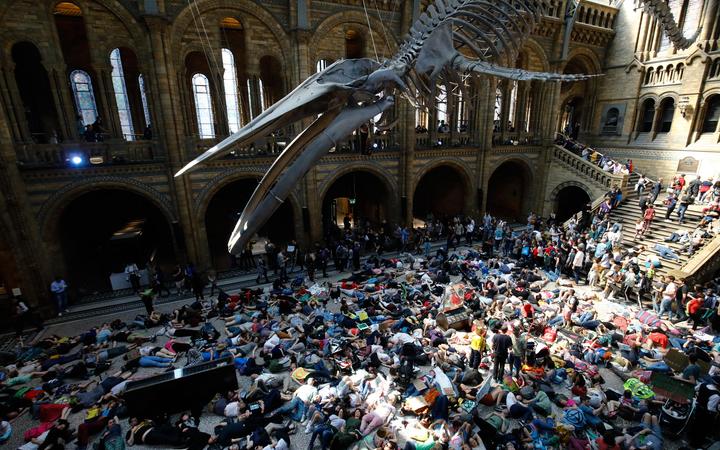 Extinction Rebellion climate change activists perform a mass "die in" under the blue whale in the foyer of the Natural History Museum. Photo: AFP

It comes as more than 1,000 people have been arrested since the protests began in central London a week ago.

The climate change group are now based in Marble Arch, after police moved protesters from Oxford Street, Waterloo Bridge and Parliament Square.

Extinction Rebellion said it hoped the protest at the museum, which it called a "die-in", would raise awareness of what they call the "sixth mass extinction".

Most of the protesters finished their lie-down protest after about half an hour.

But some people wearing red face paint, veils and robes remained to give a performance to classical music on the steps underneath the whale skeleton.

On Sunday, teenage activist Greta Thunberg told the rally in Marble Arch that they were "making a difference".

Mayor of London Sadiq Khan said the protest was taking "a real toll" on London's police and businesses.

"I'm extremely concerned about the impact the protests are having on our ability to tackle issues like violent crime if they continue any longer," he said.

About 9,000 police officers have been responding to the protest since it began a week ago on 15 April.

A total of 1,065 people have been arrested and 53 have been charged for various offences including breach of Section 14 Notice of the Public Order Act 1986, obstructing a highway and obstructing police.

Olympic gold medallist Etienne Stott was one of the activists arrested as police moved to clear Waterloo Bridge on Sunday evening.

The London 2012 canoe slalom champion was carried from the bridge by four officers as he shouted about the "ecological crisis". 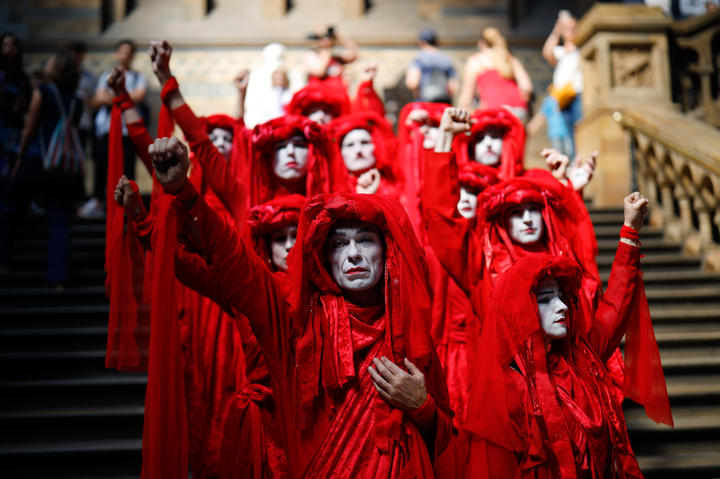 Extinction Rebellion climate change activists in red costume attend a mass "die in" in the main hall of the Natural History Museum in London. Photo: AFP

An Extinction Rebellion spokesperson said there would be no escalation of activity on Easter Monday, but warned that the disruption could get "much worse" if politicians are not open to their negotiation requests.

On Sunday, one organiser told the BBC the group were planning "a week of activities" including a bid to prevent MPs entering Parliament.

The group said a "people's assembly" was due to be held later to decide what will happen in the coming week.

On Sunday, Ms Thunberg was greeted with chants of "we love you" as she took to the stage in front of thousands of people at the rally.

The 16-year-old, who is credited with inspiring an international movement to fight climate change, told the crowd "humanity is standing at a crossroads" and that protesters "will never stop fighting for this planet".

Met Commissioner Cressida Dick has said that during her 36-year career she had never known a single police operation to result in so many arrests.

Since the group was set up last year, members have shut bridges, poured buckets of fake blood outside Downing Street, blockaded the BBC and stripped semi-naked in Parliament.

It has three core demands: for the government to "tell the truth about climate change"; to reduce carbon emissions to zero by 2025; and to create a citizens' assembly to oversee progress.

Controversially, the group is trying to get as many people arrested as possible.

But critics say they cause unnecessary disruption and waste police time when forces are already overstretched.