More than 100 years after Anzac bonds were forged at Gallipoli, concerns over a so-called "insider threat" are being blamed for a ban on New Zealanders joining the Australian Defence Force (ADF). 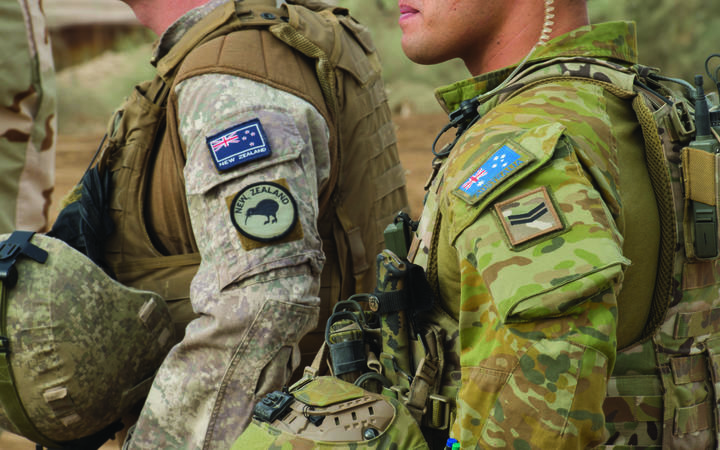 New Zealand and Australian soldiers stand side by side in uniform. Photo: NZDF

Australian citizenship is generally a requirement to join the ADF, but exemptions are routinely granted for recruits with highly sought-after specialist skills.

Hundreds of thousands of New Zealanders call Australia home, but for many there is virtually no chance they will ever be granted citizenship.

A welfare crackdown introduced by the Howard government in 2001 means New Zealand expats are "non-protected special visa holders", ineligible for social security and prevented from obtaining citizenship, meaning a career in the military is virtually impossible.

For several years a group of veterans from both sides of the Tasman have unsuccessfully argued for special exemptions that would allow young Kiwis to enlist in Australia even if they were not citizens.

Kevin Bovill served in both the New Zealand and Australian armies, with deployments to Vietnam and Borneo, and said it was "time things changed".

"The Australian Government and Defence recruiting turn around say: 'Bugger off. You want to join the Army? Go to New Zealand'," Mr Bovill said.

"They place absolutely no value on the loyalty and commitment expressed by these young kids who are endeavouring to make a career in the ADF."

An email sent last year by head of ADF recruiting Colonel Phillip Hoglin gave some insight into why New Zealanders were being turned away.

"The process and mechanisms for obtaining security clearances are now heavily reliant on an applicant holding Australian citizenship," the email read.

"Citizenship remains a key criteria to enter the ADF, and permanent residents will only ever be forwarded to the services for a waiver decision when there are no other candidates with Australian citizenship."

In a reply, Dan Fortune, the head of the Government's Security Vetting Agency, explained that "given the wider Government focus on mitigating the insider threat" all existing applications from non-Australian citizens had been withdrawn.

Young Kiwi remains hopeful she can still join the ADF

Eighteen-year-old Sarah (not her real name) is an Army cadet who was recently told her application to join the Australian military had been rejected due to a change in regulations.

"I went through and did a lot of my testing, thought I was all good on that, thought I had my second assessment day booked," she said.

"Then a couple of weeks out from that got a call, a pretty vague call, saying 'regulations changed, we're withdrawing your application, we don't want to hear from you until you've been granted your citizenship'."

Despite the setbacks, the young woman, who has lived in Australia for 11 years, says she is not giving up on her dream of one day wearing the uniform of her adopted country.

"I'm not going to let that dream go," Sarah said.

"I'm hoping that as soon as I can get citizenship through I'll be there in my greens and serving my country."