The Islamic State (IS) group may be linked to bomb blasts which killed 359 people and wounded 500 in Sri Lanka, the country's prime minister has said. 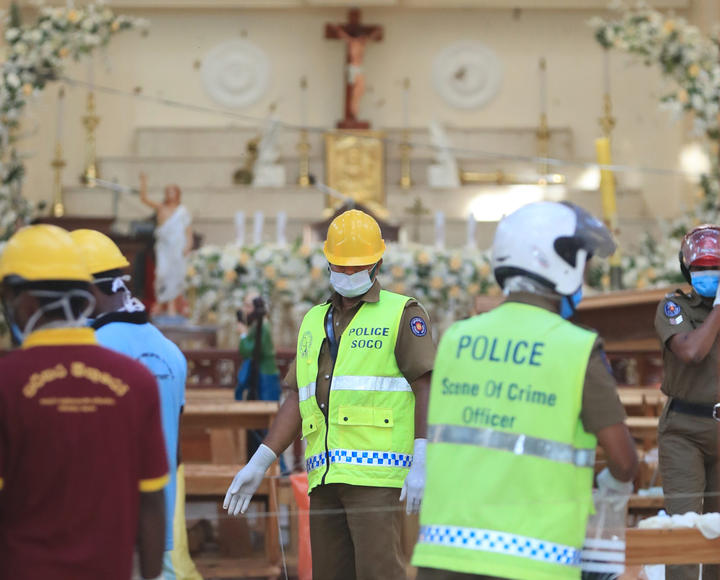 Investigators working in St. Sebastian Church in Negombo, Sri Lanka on April 23, 2019, two days after the church was hit in series of bomb blasts targeting churches and hotels. Photo: AFP

Ranil Wickremesinghe said the government believed Sunday's attacks could not have been carried out without help from terror groups abroad.

IS claimed the attack on Tuesday, although did not provide evidence.

In a televised address late on Tuesday, Maithripala Sirisena said he plans to change the heads of defence forces "within the next 24 hours".

He also admitted threat reports had not been shared with him, and promised to take "stern action" against security officials. 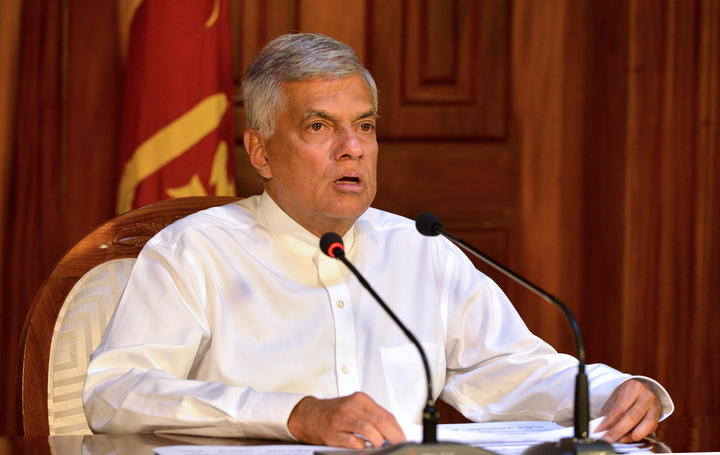 What do we know about the attackers?

One of the attackers behind the Easter Sunday bombings in Sri Lanka studied in the UK, officials say, as further details on the bombers begin to emerge.

The country's deputy defence minister said the bomber studied in the UK before doing a course in Australia.

The announcement comes after the death toll rose again to 359 on Wednesday with more than 500 people wounded.

Prime Minister Ranil Wickremesinghe said the Islamic State (IS) group may be linked to the blasts.

IS has said it was responsible for the attacks, although it has not provided direct evidence of its involvement.

Police say they have identified eight out of nine attackers - one of whom is believed to have been a woman - with no foreigners among them.

On Wednesday, the US envoy to Sri Lanka warned that there were "ongoing terrorist plots" in the country.

"We believe that one of the suicide bombers studied in the UK and then later on did his postgraduate in Australia before coming back to settle in Sri Lanka," he said.

Mr Wijewardene said that "most of [the attackers] are well educated and come from... middle or upper middle class" families.

"They are financially quite independent and their families are quite stable financially," he added.

Authorities say they are looking into possible links between the locals who carried out the suicide bombings and the Islamic State group.

But Mr Wickremesinghe said the attacks "could not have been done just locally".

"There had been training given and a coordination which we are not seeing earlier," he said.

Police have now detained around 60 suspects in connection with the attack. A state of emergency remains in effect to prevent further attacks.

An attack on a fourth hotel on Sunday was foiled, Mr Wickremesinghe said. He also warned that further militants and explosives could still be "out there" following the attack.

What did the prime minister say?

But Mr Wickremesinghe said the attacks "could not have been done just locally".

"There had been training given and a coordination which we are not seeing earlier," he said.

Police have now detained 40 suspects in connection with the attack, all of whom were Sri Lankan nationals. A state of emergency remains in effect to prevent further attacks.

Mr Wickremesinghe said that only Sri Lankan nationals had been arrested in connection with the attack so far, but that some of the attackers may have travelled abroad before the bombings.

''We, certainly the security apparatus, are of the view there are foreign links and some of the evidence points to that. So if the IS (Islamic State) claimed it, we will be following up on this claim," he added.

An attack on a fourth hotel on Sunday was foiled, Mr Wickremesinghe said. He also warned that further militants and explosives could still be "out there" following the attack. 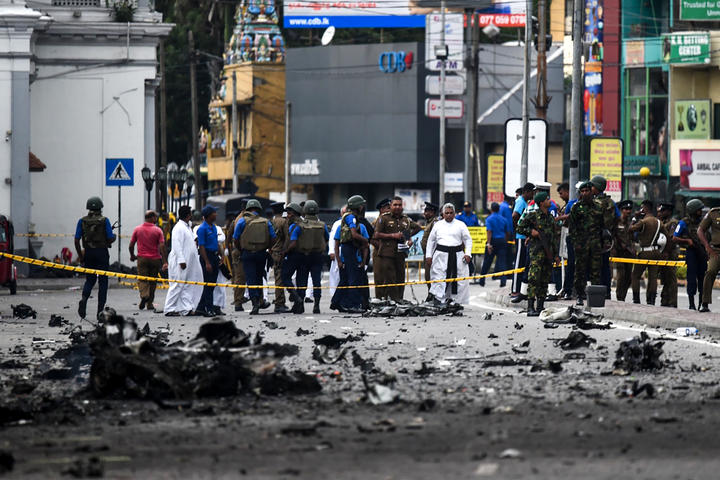 Who could be behind the attacks?

IS said it had "targeted nationals of the crusader alliance [anti-IS US-led coalition] and Christians in Sri Lanka" via its Amaq news outlet.

It provided no evidence for the claim but shared an image on social media of eight men purported to be behind the attack.

The group's last territory fell in March but even then experts had warned it does not mean the end of IS or its ideology.

Earlier, the country's defence minister Ruwan Wijewardene told parliament that NTJ was linked to another radical Islamist group he named as JMI. He gave no further details.

He also said "preliminary investigations" indicated that the bombings were in retaliation for deadly attacks on mosques in Christchurch, New Zealand, in March.

The Sri Lankan government is facing scrutiny after it emerged the authorities were warned about a possible attack.

Security services had been monitoring the NTJ but the prime minister and the cabinet were not warned, ministers said.

The Sri Lankan government has said locals from two known groups carried out the attack. But from the start - because of the scale and sophistication of it - they have also said they thought there was an external role.

In the past, IS has sometimes claimed attacks that it was not involved in or which it simply inspired. But the details from IS would seem to back up the government's assessment.

The choice of targets is much more in line with IS ideology than with the traditional types of communal violence seen in Sri Lanka.

There are still questions - did the local men affiliate themselves to IS or receive direct support? Did they travel to Syria or to other countries? The Sri Lankan government has said it believes some of them had spent time abroad, but how significant was that to the plot?

Answering questions like these will be important not just for Sri Lanka but other countries as they try and understand whether other relatively small, locally focused groups could be capable of transforming a threat into violence on such a massive scale. 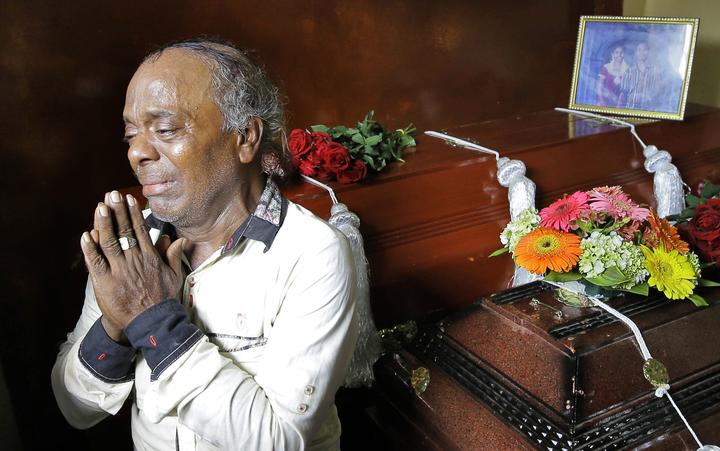 Baby Joseph Gomes prays standing next to coffins of his family members killed in the Easter Sunday bombings in Colombo, Sri Lanka. Photo: The Associated Press

The first mass funeral was held on Tuesday, as Sri Lanka marked an official day of mourning for the victims.

Most of those who died were Sri Lankan nationals, including scores of Christians attending Easter Sunday church services.

Sri Lankan officials said 38 foreign nationals were among the dead, with another 14 unaccounted for. The death toll includes at least eight British citizens and at least 10 Indian nationals.

The mass funeral for about 30 victims took place at St Sebastian's church in Negombo, north of Colombo, which was one of the places targeted in Sunday's blasts. Another funeral service was scheduled for later on Tuesday.

A moment of silence was also observed at 08:30 on Tuesday, reflecting the time the first of six bombs detonated.

Flags were lowered to half-mast and people, many of them in tears, bowed their heads in respect.