US President Donald Trump believed the appointment of a special counsel to take over the federal probe of Russian interference into the 2016 election would spell the end of his presidency, according to the report by Special Counsel Robert Mueller. 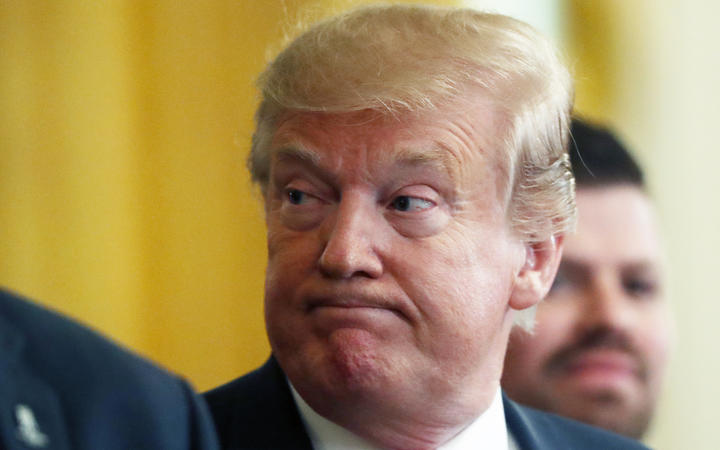 When then-Attorney General Jeff Sessions informed Mr Trump of Mr Mueller's appointment in May 2017, the report said, Mr Trump slumped back in his chair and said: "Oh my God. This is terrible. This is the end of my presidency. I'm f----d."

Mr Trump then asked Mr Sessions, whom he had berated for months for recusing himself from the Russia probe: "How could you let this happen, Jeff?" and told Mr Sessions he had let him down.

The release on Thursday (early Friday morning NZ time) of the 448-page report that disclosed the findings of a 22-month investigation represented a watershed moment in Mr Trump's tumultuous presidency.

The reported detailed how Mr Trump tried to impede the probe, raising questions of whether he committed the crime of obstruction of justice.

Mr Sessions, who resigned in November, recalled that Mr Trump said to him, "you were supposed to protect me," or words to that effect, the report said.

The Republican president had bristled at the investigation since taking office in January 2017, belittling Mr Sessions and calling the probe a witch hunt and a hoax.

"Everyone tells me if you get one of these independent counsels it ruins your presidency," Mr Trump said, according to the report. "It takes years and years and I won' t be able to do anything. This is the worst thing that ever happened to me."

A month after the appointment, in June 2017, Mr Trump tried to get rid of Mueller, according to the report. 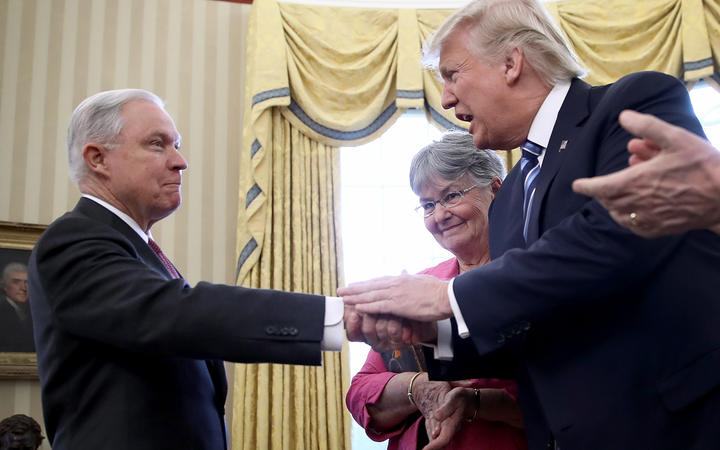 US President Donald Trump shakes the hand of Jeff Sessions after Sessions was sworn in as the new US Attorney General in 2017. Photo: Win McNamee/Getty Images/AFP

He called White House counsel Don McGahn at home and told him to call Acting Attorney General Rod Rosenstein and say Mr Mueller "had conflicts of interest and must be removed," the report said.

"McGahn did not carry out the direction, however, deciding that he would resign rather than trigger what he regarded as a potential Saturday Night Massacre," the report said, referring to the Watergate-era firing of key law enforcement officials by President Richard Nixon.

Two days later, the report said, "the President made another attempt to affect the course of the Russia investigation."

He asked his former campaign manager, Corey Lewandowski, to deliver Mr Sessions a message that he should announce publicly that the investigation was "very unfair" to Mr Trump, that the president had done nothing wrong and that he would allow Mr Mueller to "move forward with investigating election meddling for future elections."

Mr Mueller did not make a conclusion on whether Mr Trump, whose presidency has been overshadowed by the Russia investigation, had committed obstruction of justice but did not exonerate him either.

It also concluded, as US Attorney General William Barr announced last month, that Mr Trump and his campaign had not engaged in a criminal conspiracy with Russia during the election.

Mr Barr in March concluded that Mr Trump had not broken the law, but told a news conference that Mr Mueller had detailed "10 episodes involving the president and discusses potential legal theories for connecting these actions to elements of an obstruction offense."

Mr Trump appeared to be in a celebratory mood, saying at a White House event with wounded US troops that he was "having a good day" following the report's release, adding, "It's called no collusion, no obstruction."

Special Counsel Robert Mueller's report builds upon dozens of interviews, notes and communications to piece together what was happening inside President Donald Trump's White House.

Here are some of those scenes:

Chief of Staff John Kelly detailed a "tense" Oval Office meeting he convened the morning of 6 February, 2018, to try to smooth things over between Mr Trump and White House Counsel Don McGahn. 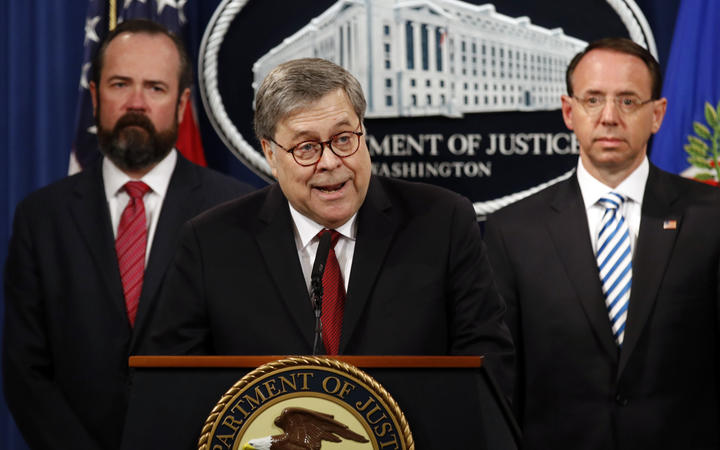 Months earlier, Mr McGahn had been on the brink of resigning when he said Mr Trump told him to get rid of Special Counsel Mueller. Now, Mr Trump was angry because the New York Times and Washington Post had written articles about Mr McGahn's refusal to fire Mr Mueller.

"I never said to fire Mueller," Mr Trump began the meeting, according to Mr McGahn's retelling to Mr Mueller. "I never said 'fire.' This story doesn't look good. You need to correct this. You're the White House counsel."

Mr McGahn refused, saying that the article in the Times was accurate.

"Did I say the word 'fire'?" Mr Trump then said, according to accounts by both Mr McGahn and Mr Kelly.

Mr McGahn said he responded, "What you said is, 'Call Rod (Rosenstein), tell Rod that Mueller has conflicts and can't be the Special Counsel.'"

Mr Trump told Mr Christie, who had become an ally of the president early in the campaign, that the firing of Michael Flynn, the former national security aide, was going to solve his problems.

"Now that we fired Flynn, the Russia thing is over," Mr Trump told Mr Christie, the governor recalled.

Mr Christie laughed and told the president he expected they would still be discussing Russia a year later.

"That was the problem. I fired Flynn. It's over," Mr Trump countered.

Mr Christie, a former US attorney, then told the president that he should not talk about the investigation, even if frustrated, and that he was going to be stuck with the Flynn story for a long time.

"Like gum on the bottom of your shoe," Mr Christie said.

As Mr Trump flew from Saudi Arabia to Tel Aviv in May 2017, he reached into his pocket and produced a resignation letter that had been written two days earlier by Mr Sessions.

Mr Trump showed the letter to senior advisers, including Hope Hicks, who recalled the scene to Mr Mueller's team. 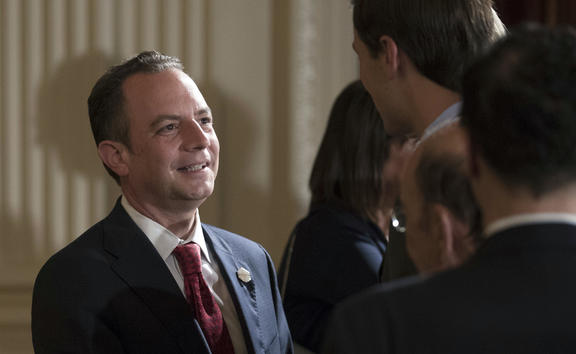 The letter had already become a point of concern among Mr Trump's aides. Mr Sessions had delivered the letter to Mr Trump the day before, but ultimately Mr Trump and the attorney general had determined he would remain in the job.

White House Chief Strategist Steve Bannon and Chief of Staff Reince Priebus were concerned that Mr Trump was holding on to the letter and that he would use it as leverage against the Justice Department. The two top aides decided to try to get it back.

The president had the Justice Department "by the throat," Mr Priebus said.

But when Mr Preibus approached Mr Trump on the Middle East trip and asked him to turn it over, the president insisted it wasn't with him. Instead, Mr Trump claimed, it was somewhere in the White House residence.

It would take another 10 days - three days after Mr Trump returned from his trip - for the president to finally turn it over.

The inquiry laid bare what the special counsel and US intelligence agencies have described as a Russian campaign of hacking and propaganda to sow discord in the United States, denigrate 2016 Democratic candidate Hillary Clinton and boost Mr Trump, the Kremlin's preferred candidate. Russia has denied election interference. 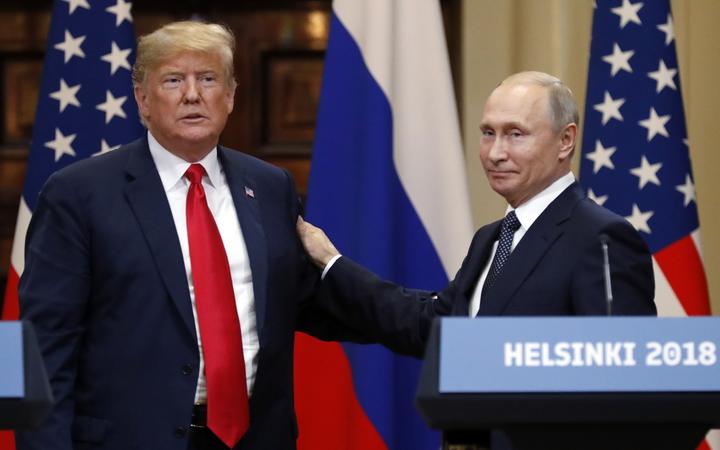 President of Russia Vladimir Putin and President of the US Donald Trump, left, during the joint news conference following their meeting in Helsinki. Photo: AFP / Sergey Guneev / Sputnik

In analysing whether Mr Trump obstructed justice, Mr Mueller looked at a series of actions by Mr Trump, including his attempts to remove Mr Mueller and limit the scope of his probe and efforts to prevent the public from knowing about a June, 2016 meeting at Trump Tower in New York between senior campaign officials and Russians.

The report said there was "substantial evidence" that Mr Trump fired James Comey as FBI director in 2017 due to his "unwillingness to publicly state that the president was not personally under investigation."

Mr Mueller cited "some evidence" suggesting Mr Trump knew about former national security adviser Michael Flynn's controversial calls with the Russian ambassador to the United States before Mr Trump took office, but evidence was "inconclusive" and could not be used to establish intent to obstruct.

Before the report's release, Mr Barr gave a news conference at the Justice Department as he sought to shape the narrative on the document's findings.

One of a handful of people to have seen the report before its release, Barr emphasized, as he had said last month, that Mr Mueller did not conclude there was collusion between Mr Trump's campaign and Moscow.

"President Trump faced an unprecedented situation. As he entered into office and sought to perform his responsibilities as president, federal agents and prosecutors were scrutinizing his conduct before and after taking office and the conduct of some of his associates," Mr Barr said.

Mr Barr seemed to offer cover for Mr Trump's actions by saying the report acknowledges that "there is substantial evidence to show that the president was frustrated and angered by a sincere belief that the investigation was undermining his presidency, propelled by his political opponents, and fueled by illegal leaks."

Donald Trump's former campaign chief Paul Manafort has been jailed for 43 more months on charges stemming from the Russia investigation.

Mr Mueller's team did not issue a subpoena to force Mr Trump to give an interview to the special counsel because it would have created a "substantial delay" at a late stage in the investigation, the report said.

It said Mr Mueller accepted the longstanding Justice Department view that a sitting president cannot be indicted on criminal charges, while still recognising that a president can be criminally investigated.

The report also cited Mr Mueller's repeated efforts to convince Mr Sessions to resume oversight of the probe after he had recused himself because of his own prior contacts with Russia's ambassador to the United States.

Mr Mueller said evidence he collected indicates that Mr Trump intended to encourage his former campaign chairman, Paul Manafort, not to cooperate with the investigation and that the evidence supports the idea that Mr Trump wanted Mr Manafort to believe that he could receive a presidential pardon.

The report said the special counsel's team determined there was a "reasonable argument" that the president's son, Donald Trump Jr, violated campaign finance laws, but did not believe they could obtain a conviction.

Some Democrats in the House of Representatives have spoken of launching impeachment proceedings against Mr Trump in Congress but top Democrats have been notably cautious. Any such effort would be unlikely to be successful because Trump fellow Republicans controls the Senate, which would decide the president's fate.