A Democratic congresswoman says she will not be silenced after facing a barrage of criticism over comments she made about the 9/11 attacks - including from Donald Trump. 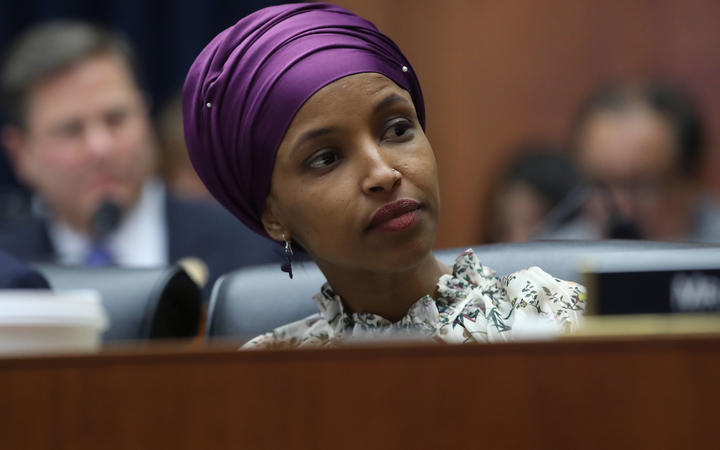 Democratic congresswoman Ilhan Omar won a Minnesota seat in the House of Representatives last November, becoming one of the first two Muslim women ever elected to the US Congress. Photo: AFP - Getty Images

The US president tweeted "WE WILL NEVER FORGET" alongside a video showing footage of the 11 September 2001 terrorist attacks spliced with a speech by Representative Ilhan Omar.

"Some people did something," she is seen saying, in between footage of planes hitting the Twin Towers and people fleeing the buildings.

Republicans have accused her of downplaying the attacks, but Democrats have largely rallied to her defence, saying she had been quoted out of context and some accusing Mr Trump of inciting violence against her and Muslims.

Who is Congresswoman Omar?

Ms Omar won a Minnesota seat in the House of Representatives last November, becoming one of the first two Muslim women ever elected to the US Congress.

Her family originally came to the US as refugees from Somalia and she is the first congresswoman to wear the hijab.

Despite being a newcomer to Washington, this is not the first time Ms Omar has made headlines.

She has been accused of anti-Semitism over comments she made about Israel and pro-Israel lobbyists. After being rebuked last month, including by Democrats, she apologised and said she was "listening and learning".

The congresswoman has also raised the alarm about anti-Muslim rhetoric surrounding her, in response to a Republican poster that showed her alongside the Twin Towers.

Just last week, police arrested a 55-year-old man in New York state for allegedly calling her office with a graphic death threat in which he reportedly labelled her a "terrorist".

What did she say?

The "some people did something" quote was from a speech Ms Omar gave to a civil rights group, the Council on American-Islamic Relations (Cair), on 23 March.

In the 20-minute speech she discussed issues affecting the community like Islamophobia and the recent mosque attack in New Zealand.

The comments in Mr Trump's video were taken from a point she made about the treatment of US Muslims in the aftermath of the 11 September attacks:

"Here's the truth. For far too long we have lived with the discomfort of being a second-class citizen and, frankly, I'm tired of it, and every single Muslim in this country should be tired of it. Cair was founded after 9/11 because they recognized that some people did something and that all of us were starting to lose access to our civil liberties."

After the Washington Post fact-checked the statement to clarify Cair was actually founded in 1994, a spokesman for Ms Omar told the paper that she misspoke and meant to say the organisation's size had doubled after the attacks.

How did the row develop?

Her speech began getting attention on 9 April, when a clip was shared by Texas Republican Representative Dan Crenshaw, who described her phrasing as "unbelievable".

Ronna McDaniel, chair of the Republican National Committee, described the congresswoman as "anti-American".

Ms Omar responded by calling some of the comments as "dangerous incitement, given the death threats I face" and comparing her remarks to ones made by former President George Bush.

On Thursday, the New York Post published a front-page spread of an image of the attack with the headline: "Here's your something"

The cover proved divisive. Some on social media praised it, but others heavily criticised the use of 9/11 images.

Then, on Friday, President Trump posted the video of Ms Omar. It is currently pinned to the top of his account and has been shared tens of thousands of times.

What was the response?

Many social media users responded by using #IStandWithIlhan - which trended worldwide on Twitter on Friday.

CNN showed the clip in discussions, but then presenter Chris Cuomo apologised for airing it. MSNBC host Joy Reid also refused to show it.

A number of high-ranking Democrats, including many in the running for the 2020 presidential nomination, have come out to criticise Mr Trump and defend Ms Omar.

Elizabeth Warren accused the president of "inciting violence against a sitting congresswoman".

Senators Amy Klobuchar and Kamala Harris both accused the president of spreading hate.

Nancy Pelosi, Speaker of the House, said Mr Trump was wrong to use the images but also suggested Ms Omar had been dismissive of the attacks.

One reply to Ms Pelosi, by film director and frequent Trump critic Ava DuVernay, which said Ms Pelosi's comment was "not enough", has been liked thousands of times.

Rashida Tlaib, the other Muslim serving in Congress, and another Democratic Congresswoman, Alexandria Ocasio-Cortez, have both called on senior Democrats to do more to support Ms Omar.

Responding directly in a series of tweets on Saturday, the congresswoman thanked people for their support and vowed that she "did not run for Congress to be silent".