Powerful storms that killed at least three people swept across southern US states after spawning suspected tornadoes that left more than 20 people injured and many homes and businesses damaged or without power. 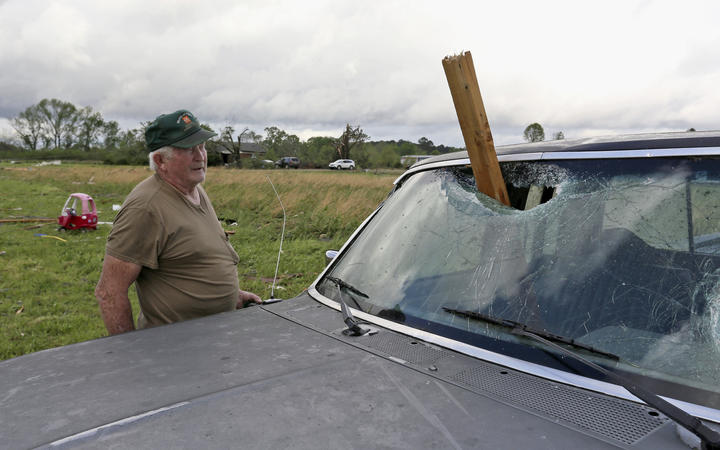 A piece of wood was hurled through the windscreen of a truck as the storm moved through Hamilton, Mississippi. Photo: AP

One person was killed in northeastern Mississippi when a tree crashed onto his trailer, Monroe County road manager Sonny Clay said at a news conference, adding that a tornado had struck. Another 19 were taken to hospitals, including two who were in critical condition.

A tornado was reported in the area 225km southwest of Memphis, Tennessee, at the time.

National Weather Service meteorologist John Moore said a possible twister touched down on Saturday in the Vicksburg, Mississippi, area. No injuries were reported there, but officials said several businesses and vehicles were damaged. Trees were down throughout the hilly city on a bluff overlooking the Mississippi.

The roof of a hotel in New Albany, Mississippi, was damaged, although the cause was unclear. Mississippi State University's 21,000 students huddled in basements and hallways as a tornado came near the school's campus in Starkville.

University spokesperson Sid Salter said some debris, possibly carried by the tornado, was found on campus, but no injuries were reported and no buildings were damaged. Trees were down and at least some minor damage was reported in residential areas east of the campus.

Heavy rains and storms raked the Magnolia State into the night, then moved into Alabama. A possible tornado knocked out power and left damage in Troy, about 80km south of Montgomery. A mobile home community was damaged, but no injuries were reported.

In East Texas, two children were killed when a pine tree fell onto the back of the car in which they were riding in a severe thunderstorm Saturday.

The car was on a back country road in Pollok, Texas, about 240km southeast of Dallas. The tree "flattened the car like a pancake," said Capt. Alton Lenderman of the Angelina County Sheriff's Office. The children, ages 8 and 3, were dead at the scene, although both parents, who were in the front seat, escaped injury, he said.

The large storm system also knocked out power to thousands and caused flash floods. More than 140,000 customers lost power in Texas, Mississippi, Louisiana, and Arkansas as of late Saturday.

The weather service said preliminary information showed an EF-3 tornado touched down with winds of 225 km/h. Crews were sent to survey the damage.

Two people were hospitalised for injuries not thought to be life-threatening, while others were treated at the scene for minor injuries, Yezak said. Some people had to be extricated from their homes.

Downed trees and damage to buildings and a transmission tower were reported, said meteorologist Monique Sellers.

Winds of up to 96 km/ h were reported in Cherokee County, Texas, damaging two homes in Alto, about 225km north of Houston, but no injuries were reported.

The forecast of severe weather forced officials at the Masters in Augusta, Georgia, to begin the tournament early on Sunday, starting threesomes off the first and 10th tees on the day's final round in hopes of finishing in midafternoon before the winds and rains begin.