One man is dead and another is fighting for his life after a drive-by shooting outside a nightclub in Melbourne yesterday. 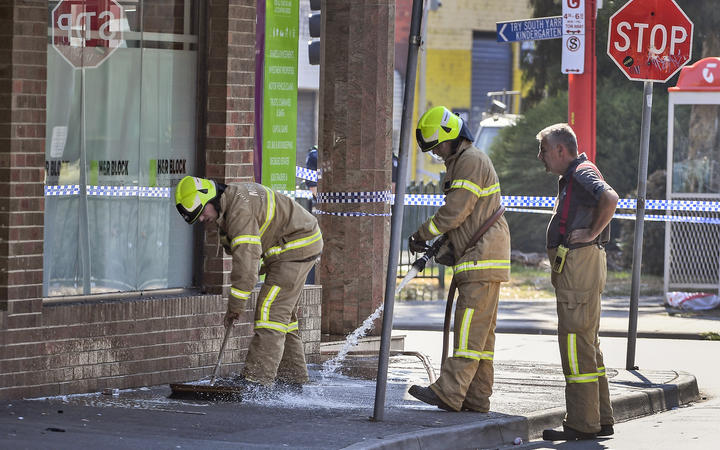 Firemen wash away bloodstains after a security guard was shot dead with another man fighting for his life after a drive-by shooting outside a popular Melbourne nightclub. Photo: William West / AFP

Police said at least four people were hit by shots fired from a car into a crowd outside the Love Machine nightclub in Prahran about 3.10am.

Among the victims were three of the venue's security guards, and a patron who was lining up to enter the club. Four people were taken to hospital.

A 37-year-old Narre Warren South man who worked as a security guard at the venue has since died in hospital, police said.

A 28-year-old man remains in a critical condition in hospital.

Detective inspector Andrew Stamper of the homicide squad said investigators had been told a man ran from the scene, leaving a trail of blood on the footpath.

"We just don't know if that's one of the four people that we've caught up with, or potentially whether there was somebody else who was injured," Mr Stamper said.

He declined to detail the injuries of the four men who were taken to hospital.

"Obviously they're gunshot wounds from fairly close proximity, so horrific injuries," he said.

Mr Stamper said it was too early to say whether the attack was a targeted one, or whether the shooter had been inside the club earlier.

He said the motive for the attack was unclear.

Detectives will investigate possible links to outlaw motorcycle gangs and other organised crime groups, and any possible connections to other recent shootings.

Over a 10-day period last month, five people were killed in separate shootings in Springvale, Meadow Heights, Dandenong and Kensington.

Mr Stamper said the full resources of police would be deployed to find those responsible for the latest shooting.

"We have got a lot of people that are focused on this and we won't stop," he said.

"No stone will be left unturned in terms of finding the people who have carried out this act."

Steve Yousif, who describes himself as a Love Machine host, posted on Facebook that "the love machine family lost a beautiful soul today".

Police are investigating if a black Porsche SUV seen leaving the area is related to the shooting.

Police said the car was later found burnt out in Wollert, in Melbourne's north.

A witness, Daniel, who lives nearby, said he was woken by gunshots.

"I thought it was three gunshots and then there was a bit of screaming and commotion downstairs, so I just stuck my head out the window which looks over Love Machine and then everyone was running around," he said.

He said he saw police with what looked like assault rifles, and heard officers telling people to get out of the way.

He saw paramedics working on three people outside the club before they were taken away in ambulances.

Forensic police spent this morning searching the footpath and a drain outside the nightclub.

Officers have marked off a large area of the footpath where blood stains can be seen.