Retired Pope Benedict XVI has published a letter which blames clerical sex abuse on the "all-out sexual freedom" of the 1960s. 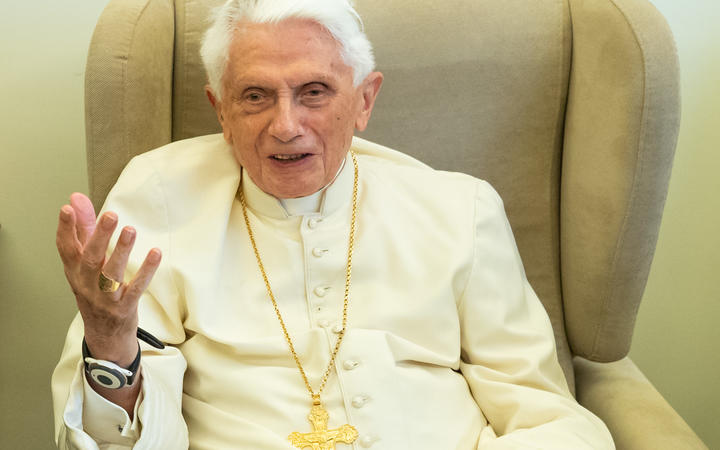 The letter has sparked fierce criticism from theologians who say it is "deeply flawed". Some allegations of child sex abuse by priests that have emerged date back to decades before the 1960s.

Pope Benedict said the '60s cultural and historical change had led to a "dissolution" of morality in Catholicism, and claimed it led to homosexuality and paedophilia in Catholic establishments.

The only solution to the problem, the former Pope said, was "obedience and love for our Lord Jesus Christ".

It is rare for the former pope, who in 2013 was the first to resign in almost 600 years, to intervene in clerical matters. He had been accused of failing to protect children and suppressing investigations, allegations he has denied.

Catholic theologian Julie Rubio said in a tweet the letter was "profoundly troubling".

At a summit in February the current Pope, Francis, called for "concrete measures" to tackle the crisis not just "simple and obvious condemnations".

As he had "served in a position of responsibility as shepherd of the church" when more cases emerged, Pope Benedict said he wanted to "contribute to a new beginning".

Published in the German Catholic magazine Klerusblatt, the 5500-word letter is divided into three parts.

The first part of Benedict's letter presents the "wider social context of the question", lamenting the 1960s as a time when "previously normative standards regarding sexuality collapsed entirely".

He blames sexual films, images of nudity and "the clothing of that time" leading to "mental collapse" and "violence".

At the time of the sexual revolution, "Catholic moral theology suffered a collapse that rendered the Church defenceless against these changes in society", he said.

The sexual revolution led to paedophilia being "diagnosed as allowed and appropriate".

Next, the letter examines how this period affected the "dissolution of the Christian concept of morality", particularly in Catholic educational institutions.

In some cases, bishops "sought to bring about a kind of new, modern" Catholicism and the sexual revolution led to "homosexual cliques" in seminaries.

He claimed one bishop showed his students pornographic films to make them "resistant to behaviour contrary to the faith".

"The question of paedophilia, as I recall, did not become acute until the second half of the 1980s," he said.

Society without God 'loses its measure'

The letter concludes by advocating a return to faith.

"Why did paedophilia reach such proportions?" he questions. "Ultimately, the reason is the absence of God."

He says "the death of God in a society" means "the end of freedom" and the solution is to "live by God and unto Him".

Finally, Pope Benedict thanks his replacement, Pope Francis, "for everything he does to show us, again and again, the light of God, which has not disappeared, even today".

Pope Francis said in a letter in published in 2018 that the Church "did not act in a timely manner" on the issue of child sexual abuse, and "showed no care for the little ones; we abandoned them".