The first privately funded mission to the Moon has crashed on the lunar surface after the apparent failure of its main engine. 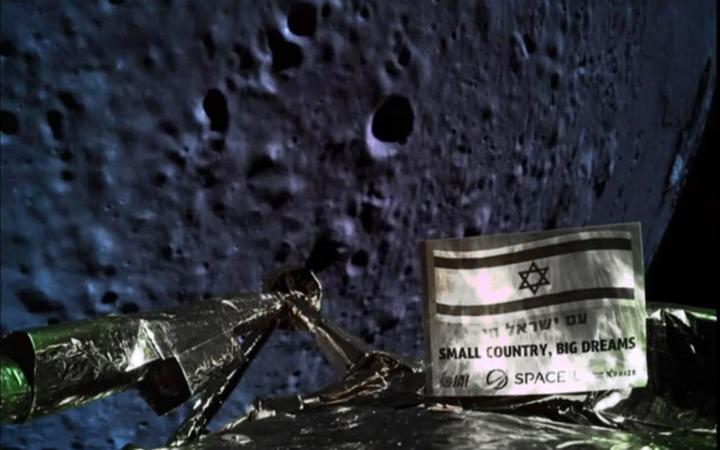 A picture taken by the camera of the Israel Beresheet spacecraft, of the moons surface as the craft approaches. Photo: AFP / HO / Israeli Aerospace Industries

The Israeli spacecraft - called Beresheet - attempted a soft landing, but had several technical and communication problems.

The aim of the mission was to take pictures and conduct experiments.

Only government space agencies from the former Soviet Union, the US and China have achieved moon landings.

The mission has cost about US$100m ($149 million) and has paved the way for future low-cost lunar exploration.

Beresheet, which is Hebrew for "in the beginning", was a joint project between SpaceIL, a privately funded Israeli non-profit organisation, and Israel Aerospace Industries.

Why has it taken weeks for Beresheet to get to the Moon?

In space terms, the Moon is a mere hop from the Earth, and most missions take a few days to get there.

But the Beresheet mission, which launched on 22 February from Cape Canaveral in Florida, spent weeks reaching its destination.

Its journey took it on a series of ever-widening orbits around the Earth, before being captured by the Moon's gravity and moving into lunar orbit on 4 April.

The average distance to the Moon is 380,000km - Beresheet travelled more than 15 times that distance. People watch the live broadcast of the SpaceIL spacecraft as it lost contact with Earth in Netanya, Israel. Photo: AP

And the main thing driving this was cost.

Instead of sitting alone on a rocket that would put it on the perfect trajectory to the Moon, it blasted off on a SpaceX Falcon 9 rocket along with a communications satellite and an experimental aircraft.

Sharing the ride into space significantly reduced its launch costs - but it meant the spacecraft had to take a much more convoluted route.

How hard was it to land?

A soft landing on the lunar surface was the major challenge for the Israeli spacecraft.

Key to its success was a British-built engine, developed by Nammo in Westcott, Buckinghamshire.

The Leros engine provided the power to get the spacecraft all the way to the Moon, but it also took Beresheet on its final descent.

The 1.5m-tall spacecraft had to rapidly reduce its speed, so a final firing of the engine will in effect slam on the brakes, hopefully taking the spacecraft to a gentle stop.

Rob Westcott, senior propulsion engineer at Nammo, said: "We've never used an engine in this kind of application before.

"The big challenge is the fact that the engine is going to have to be switched on and get very hot, then switched off for a short period of time when all that heat is remaining in its thermal mass, and then fired up again, very accurately and very precisely such that it slows the craft down and lands very softly on the surface on the Moon."

The process would have taken about 20 minutes.

All of the controls for this were uploaded and performed autonomously with mission control watching on.

What was the spacecraft supposed to do on the moon?

Its first job was to use its high resolution cameras to take some photos - including a selfie - and then send those back to Earth.

It was then going to measure the magnetic field of the spot it landed in, an area known as Mare Serenitatis.

Open University planetary and space science professor Monica Grady said "they'll be looking at the landing site really closely, which will help to work out how the magnetic measurements of the Moon fit in with the geology and geography of the Moon, which is really important to understand how the Moon formed."

The lander also carried a reflector from Nasa to help scientists make accurate measurements of the distance between the Earth and the Moon.

Temperatures on the Moon are extreme, and as the Sun rose the spacecraft would have been unlikely to survive the heat.

How significant was this mission?

Over 60 years of space exploration, only three nations have made it down onto the Moon.

The former Soviet Union achieved the first soft landing with its spacecraft Luna 9 in 1966. Nasa followed this by getting the first humans to the Moon in 1969. Then, China's Change-4 spacecraft touched down on the far-side of the Moon earlier this year.

Israel would have been the fourth nation to join this elite club.

But it's the low-price tag - and the fact that this mission has not been funded by a major space agency - that really makes this mission stand out.

Its cost of $100m is a fraction of what would normally be spent on a venture like this.

And Beresheet is not alone in pursuing low-cost lunar exploration.

Its origins lie in the Google Lunar XPrize, an international challenge offering $20m for the first privately developed spacecraft to land on the Moon.

And while the competition ended last year after no one was able to meet its deadline (the foundation have subsequently announced they will award the Beresheet collaboration $1m for their achievement), other teams involved are also continuing with their efforts to get to the Moon.

Both Nasa and Esa have also announced their intention to use commercial landers to deliver scientific payloads to the lunar surface.