A 29-year-old computer scientist has earned plaudits worldwide for helping develop the algorithm that created the first-ever image of a black hole.

Katie Bouman led development of a computer program that made the breakthrough image possible. 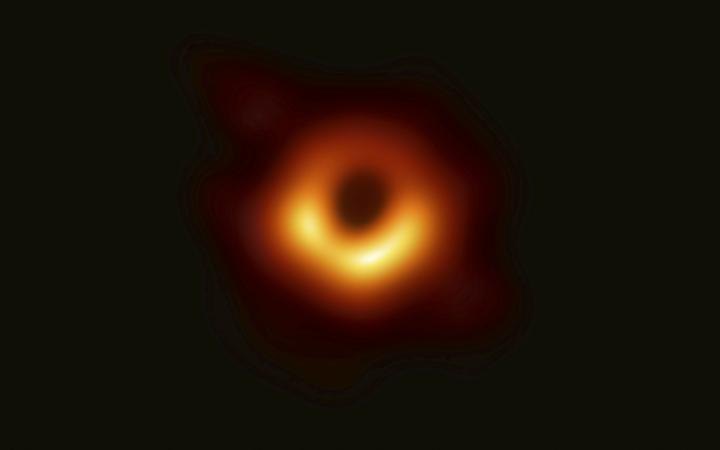 Scientists revealed this first image ever made of a black hole after assembling data gathered by a network of radio telescopes around the world. Photo: AP/ Event Horizon Telescope Collaboration / Maunakea Observatories

The remarkable photo, showing a halo of dust and gas 500 million trillion km from Earth, was released on Wednesday.

For Dr Bouman, its creation was the realisation of an endeavour previously thought impossible.

Excitedly bracing herself for the groundbreaking moment, Dr Bouman was pictured loading the image on her laptop.

"Watching in disbelief as the first image I ever made of a black hole was in the process of being reconstructed," she wrote in the caption to the Facebook post. 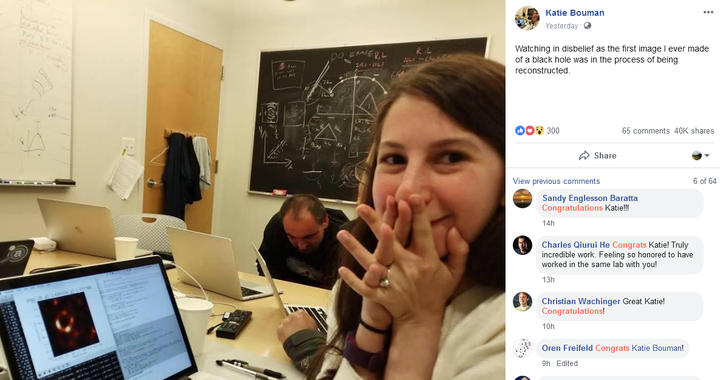 She started making the algorithm three years ago while she was a graduate student at the Massachusetts Institute of Technology (MIT).

There, she led the project, assisted by a team from MIT's Computer Science and Artificial Intelligence Laboratory, the Harvard-Smithsonian Center for Astrophysics and the MIT Haystack Observatory.

The black hole image, captured by the Event Horizon Telescope (EHT) - a network of eight linked telescopes - was rendered by Dr Bouman's algorithm.

"When we saw it for the first time, we were all in disbelief. It was quite spectacular," she told BBC Radio 5 live.

"We got really lucky with the weather... We got lucky in so many ways."

In the hours after the photo's momentous release, Dr Bouman became an international sensation, with her name trending on Twitter.

Dr Bouman was also hailed by MIT and the Smithsonian on social media.

But Dr Bouman, now an assistant professor of computing and mathematical sciences at the California Institute of Technology, insisted the team that helped her deserves equal credit.

The effort to capture the image, using telescopes in locations ranging from Antarctica to Chile, involved a team of more than 200 scientists.

"No one of us could've done it alone," she told CNN. "It came together because of lots of different people from many different backgrounds."

How did her algorithm create the image?

Put simply, Dr Bouman and others developed a series of algorithms that converted telescopic data into the historic photo shared by the world's media.

In mathematics and computer science, an algorithm is a process or set of rules used to solve problems.

No single telescope is powerful enough to capture the black hole, so a network of eight was set up to so do using a technique called interferometry.

The data they captured was stored on hundreds of hard drives that were flown to central processing centres in Boston, US, and Bonn, Germany.

Dr Bouman's method of processing this raw data was said to be instrumental in the creation of the striking image.

She spearheaded a testing process whereby multiple algorithms with "different assumptions built into them" attempted to recover a photo from the data.

The results of the algorithms were then analysed by four separate teams to build confidence in the veracity of their findings.

"We're a melting pot of astronomers, physicists, mathematicians and engineers, and that's what it took to achieve something once thought impossible," Dr Bouman says.