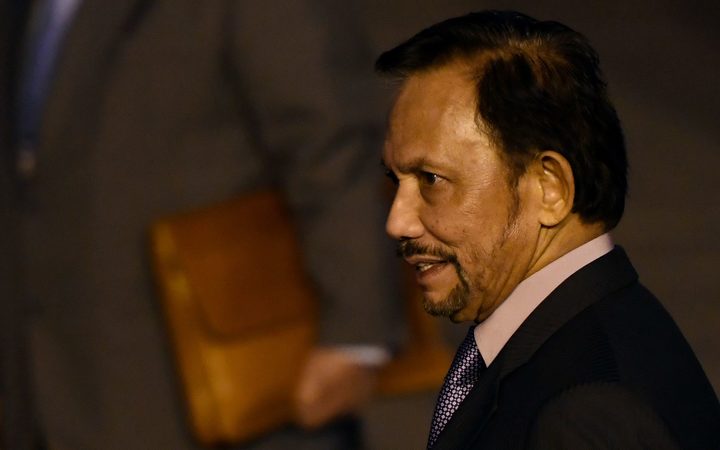 The new measures, that come into force today, also cover a range of other crimes, including punishment for theft by amputation.

The move has sparked international condemnation.

Brunei's gay community has expressed shock and fear at the "medieval punishments".

"You wake up and realise that your neighbours, your family or even that nice old lady that sells prawn fritters by the side of the road doesn't think you're human, or is okay with stoning," one Bruneian gay man, who did not want to be identified, told the BBC.

"I want to see Islamic teachings in this country grow stronger," Sultan Hassanal Bolkiah said in a public address, according to AFP news agency, without mentioning the strict new interpretation of Sharia, or Islamic law.

Homosexuality was already illegal in Brunei and punishable by up to 10 years in prison.

Muslims make up about two-thirds of the country's population of 420,000. Brunei has retained the death penalty but has not carried out an execution since 1957.

The law mostly applies to Muslims, including children who have reached puberty, though some aspects will apply to non-Muslims.

Under the new laws, individuals accused of certain acts will be convicted if they confess or if there were witnesses present.

Offences such as rape, adultery, sodomy, robbery and insult or defamation of the Prophet Muhammad will carry the maximum penalty of death.

The punishment for theft is amputation.

Those who "persuade, tell or encourage" Muslim children under the age of 18 "to accept the teachings of religions other than Islam" are liable to a fine or jail.

Individuals who have not reached puberty but are convicted of certain offences may be instead subjected to whipping.

Sultan Hassanal heads the Brunei Investment Agency, which owns the Dorchester Collection, an operator of some of the world's top hotels including the Dorchester in London and the Beverly Hills Hotel in Los Angeles.

But Hollywood actor George Clooney and other celebrities have now called for a boycott of the luxury hotels. TV host Ellen DeGeneres also called for people to "rise up", saying "we need to do something now".

The hotel operator said it did "not tolerate any form of discrimination".

"Dorchester Collection's code emphasises equality, respect and integrity in all areas of our operation, and strongly values people and cultural diversity amongst our guests and employees," it said. "Inclusion and diversity remain core beliefs."

In another development, a honorary degree awarded by the UK's University of Aberdeen to Sultan Hassanal is under review.

The country first introduced Sharia law in 2014 despite widespread condemnation, giving it a dual legal system with both Sharia and Common Law. The sultan had said then that the new penal code would come into full force over several years.