Tens of thousands of Palestinians are demonstrating in Gaza to mark the anniversary of the start of weekly protests on the boundary with Israel. 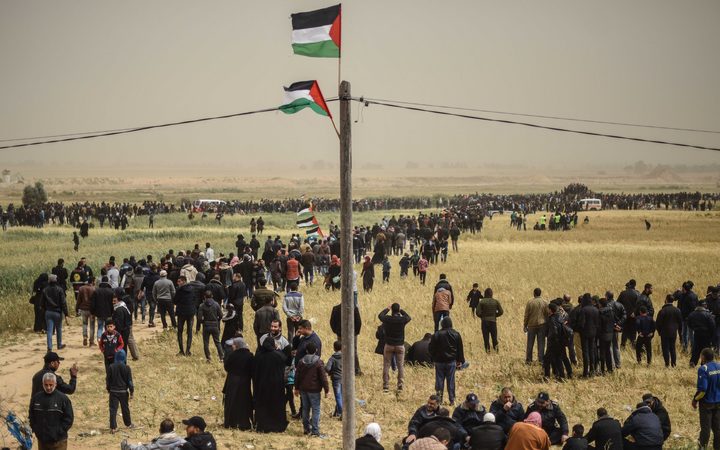 Palestinians attend a protest within the "Great March of Return" and "Palestinian Land Day" demonstrations at Israel-Gaza border in Khan Yunis Photo: AFP

At least four protesters have died in the clashes, Palestinian officials report.

The protests back the declared right of Palestinian refugees to return to ancestral homes in what is now Israel.

Some 189 Palestinians and one Israeli died in protests up to December 2018, the United Nations says.

A UN inquiry says Israeli soldiers may have committed war crimes during the protest marches - a charge Israel rejects.

This day of protests is a serious test of the fragile calm between Israel and Hamas, the Islamist group that runs the Palestinian-controlled Gaza Strip, says the BBC's Yolande Knell in Jerusalem.

What has happened so far?

The Israel Defense Forces (IDF) estimated the number of protesters at about 40,000 and there are several thousand Israeli troops along the border.

The IDF said explosive devices had been thrown over the border fence and Israeli forces had responded with "riot dispersal means" and live bullets.

At least two Palestinian protesters, both 17-year-old boys, have been killed and dozens more have been wounded, Palestinian health officials say.

The health officials say another man was shot dead by Israeli troops close to the fence overnight. 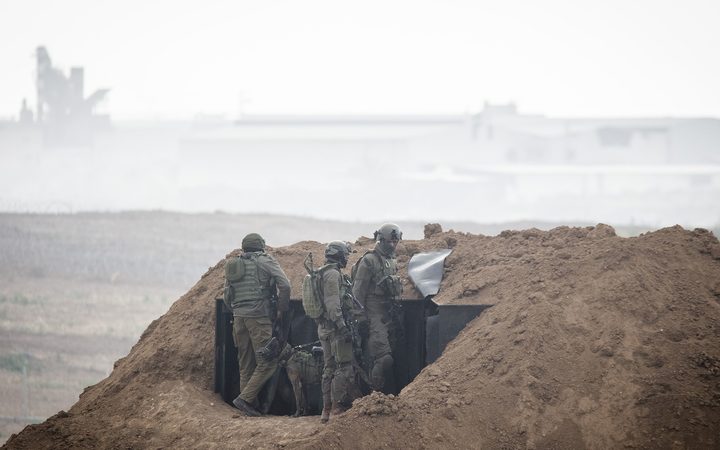 Hamas had said it would try to keep the crowds a safe distance from the fence, with Egyptian and UN mediators trying to prevent further escalation.

The clashes appear at present to be limited in scope and fears of a large number of deaths have so far not materialised.

The protests come after a tense week in which Palestinian militants fired rockets at Israel and Israel's air force struck dozens of sites in Gaza.

But Palestinian sources say Egyptian mediators have made some progress in reaching a new ceasefire agreement between the Palestinians and Israel.

What happened during earlier protests?

Palestinians have been taking part in protests along the border since 30 March 2018 as part of a campaign dubbed "the Great March of Return".

The Israeli government designates Hamas a terrorist group which it says has been seeking to use the protests as a cover to cross into its territory and carry out attacks.

It deployed soldiers along the border fence, who it said were ordered to resort to live fire only when absolutely necessary and when there was an imminent threat.

A commission of inquiry was set up by the UN Human Rights Council. 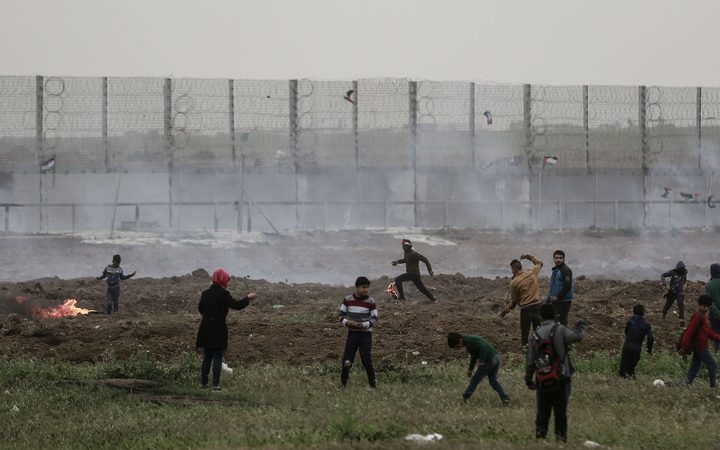 Palestinian protestors clash with Israeli forces near the Israel-Gaza border, on the first anniversary of the Great March of Return protests. Photo: AFP

The inquiry found reasonable grounds to believe that Israeli snipers had shot at children, medics and journalists, even though they were clearly recognisable as such.

Four Israeli soldiers were injured at the demonstrations. One Israeli soldier was killed on a protest day but outside the protest sites, the commission said.

Unless undertaken lawfully in self-defence, intentionally shooting a civilian not directly participating in hostilities is a war crime.

"The Human Rights Council's Theatre of the Absurd has once again produced a report that is hostile, mendacious and biased against Israel," Israel Katz said.

"No-one can deny Israel the right to self-defence and the obligation to protect its citizens and its borders against violent attacks.