Scientists have found an extraordinary snapshot of the fallout from the asteroid impact that wiped out the dinosaurs 66 million years ago. 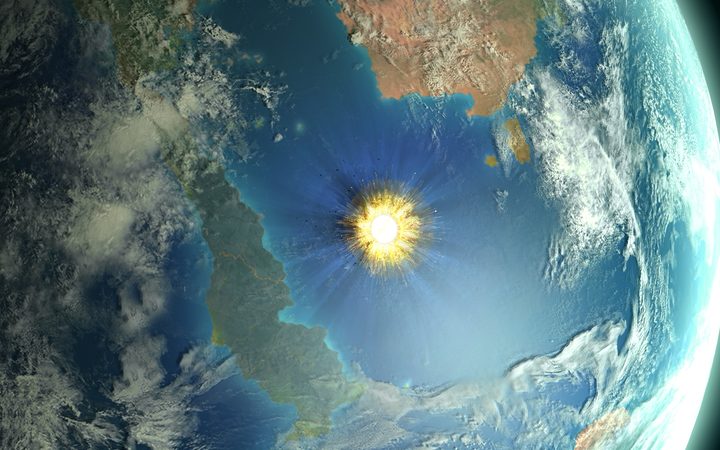 An illustration of the Chicxulub asteroid impact on the Yucatan Peninsula in Mexico. Photo: Mark Garlick/ Science Photo Library/ AFP

Excavations in North Dakota reveal fossils of fish and trees that were sprayed with rocky, glassy fragments that fell from the sky.

The deposits show evidence also of having been swamped with water - the consequence of the colossal sea surge that was generated by the impact.

The detail is reported in the Proceedings of the National Academy of Sciences (PNAS) journal.

Robert DePalma, from the University of Kansas, and colleagues say the dig site, at a place called Tanis, gives an amazing glimpse into events that probably occurred perhaps only tens of minutes to a couple of hours after the giant asteroid hit the Earth.

When this 12km-wide object slammed into what is now the Gulf of Mexico, it would have hurled billions of tonnes of molten and vaporised rock into the sky in all directions - and across thousands of kilometres.

And at Tanis, the fossils record the moment this bead-sized material fell back down and strafed everything in its path.

Fish are found with the impact-induced debris embedded in their gills. They would have breathed in the fragments that filled the water around them.

There are also particles caught in amber, which is the preserved remnant of tree resin. It is even possible to discern the wake left by these tiny, glassy tektites, to use the technical term, as they entered the resin.

Geochemists have managed to link the fallout material directly to the so-called Chicxulub impact site in the Gulf. They have also dated the debris to 65.76 million years ago, which is in agreement with the timing for the event worked out from evidence at other sites around the world. 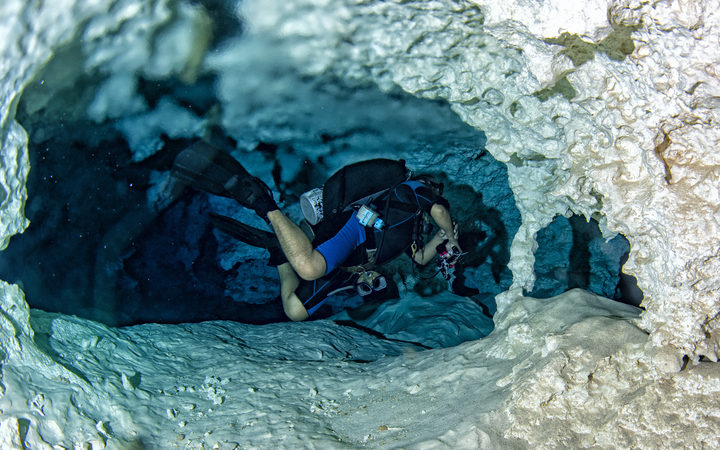 From the way the Tanis deposits are arranged, the scientists can see that the area was hit by a massive surge of water.

Although the impact is understood to have generated a huge tsunami, it would have taken many hours for this wave to travel the 3,000km from the Gulf to North Dakota, despite the likely presence back then of a seaway cutting directly across the American landmass.

Instead, the researchers believe local water could have been displaced much more quickly by the seismic shockwave - equivalent to a Magnitude 10 or 11 earthquake - that would have rippled around the Earth. It is a type of surge described as a seiche, which would have picked up everything in its path and dumped it into the jumbled collection of specimens now being reported by the team.

"A tangled mass of freshwater fish, terrestrial vertebrates, trees, branches, logs, marine ammonites and other marine creatures was all packed into this layer by the inland-directed surge," said Mr DePalma.

"A tsunami would have taken at least 17 or more hours to reach the site from the crater, but seismic waves - and a subsequent surge - would have reached it in tens of minutes."

The PNAS paper, which will go online next week, includes among its authors Walter Alvarez, the Californian geologist who, with his father Luis Alvarez, is credited with helping develop the impact theory for the demise of the dinosaurs.

The Alvarez pair identified a layer of sediment at the boundary of the Cretaceous and Palaeogene geological periods that was enriched with iridium, an element commonly found in asteroids and meteorites.

Iridium traces are also found to be capping the Tanis deposits.

Another member of the team, the University of Kansas' David Burnham, said the fossil hoard would yield critical new insights on the aftermath of the Chicxulub event.

"We've understood that bad things happened right after the impact, but nobody's found this kind of smoking-gun evidence," he explained. "People have said, 'We get that this blast killed the dinosaurs, but why don't we have dead bodies everywhere?' Well, now we have bodies. They're not dinosaurs, but I think those will eventually be found, too."

And Phil Manning, from the University of Manchester, the only British author on the paper, commented: "It's one of the most important sites in the globe now. You know, if you truly wanted to understand the last day of the dinosaurs - this is it," he told BBC News.

The Chicxulub Crater - the event that changed life on Earth