MPs have set out details of their plan to consider other Brexit options, as UK Prime Minister Theresa May was warned more ministers could quit unless she changes course. 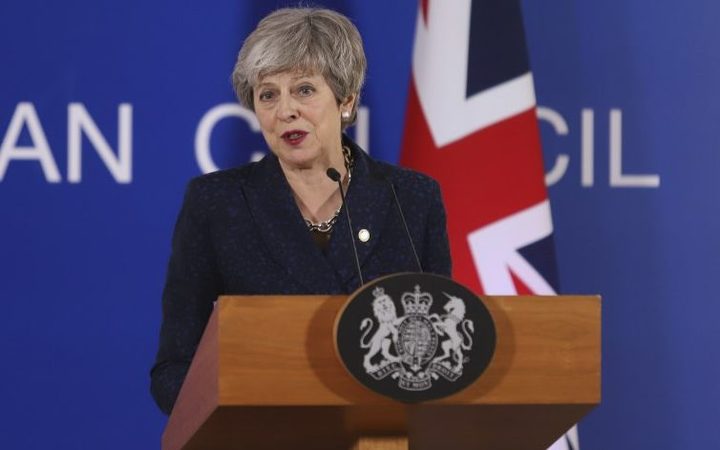 UK Prime Minister Theresa May has signalled she will try to bring her deal, which has been heavily rejected twice. Photo: AFP

The Commons will begin voting on alternatives on Wednesday (local time), in a process likely to continue into next week.

MPs will fill out a series of ballots testing support for different ideas.

As MPs seek to take the initiative from the government, there are signs that some Tory opponents of Mrs May's deal could be steeling themselves to back it if it returns to the Commons for a third time later this week.

Prominent Brexiteer Jacob Rees-Mogg indicated that he could be persuaded, given it now appeared to be a choice between her deal and no Brexit at all.

Ex-Foreign Secretary Boris Johnson told the BBC there was "no point" supporting Mrs May's deal "without any sign the UK is going to change its approach in phase two" of the negotiations - otherwise he feared the country would be indefinitely tied to the EU's rules.

But BBC political editor Laura Kuenssberg said the not very subtle subtext of Mr Johnson's remarks was "if the PM promises to go soon, then she might get my vote."

MPs took the unprecedented step of voting to seize control of the parliamentary timetable on Monday, in an attempt to end the deadlock over the terms of the UK's exit.

Groups are now putting forward a variety of different options for the UK's future relationship with the EU.

Several of these are based on the assumption that the existing withdrawal agreement with the EU will be approved, albeit with changes to the controversial Northern Ireland backstop.

Others call for a basic free trade agreement with the EU and another referendum on whether Brexit goes ahead. It will be up to Commons Speaker John Bercow to decide what is voted on.

According to a copy of a business motion released by Labour's Hilary Benn, there will be about five hours of debate on different options.

Voting by paper ballot will take place at about 19:00 GMT (8am NZT), with the results announced by Mr Bercow later that evening.

The process is likely to continue on Monday as MPs seek to whittle down options which could command majority support in Parliament.

The government has until 12 April to propose a different way forward to the EU if it cannot get the current agreement through Parliament.

Mr Burt, one of three ministers who quit on Monday to back the so-called "indicative votes" plan, said he still backed the prime minister's deal but she had a duty to look at other options.

"My advice to the prime minister would be to recognise that her duty now is perhaps to find a different answer than the one she has tried to find," he told Laura Kuenssberg.

But Mr Davis said the PM's deal was better than the alternatives and had a "decent chance" of getting through Parliament if put to the vote again.

"It's not a good deal but the alternative is a complete cascade of chaos," he said. "You are seeing proposals being put up which are all worse than hers."

The PM has signalled she will try to bring her deal, which has been heavily rejected twice, back to the Commons for a third time later this week but only if she believes she can win.

The Democratic Unionists, whose 10 MPs prop up Mrs May's government, urged Tory MPs to "stand firm" in their opposition unless there were "significant changes".

What are some of the options?

Tuesday: Theresa May met her cabinet. Tuesday (local time) had been considered as a possible day for the so-called third meaningful vote on Mrs May's withdrawal deal. But, on Monday, the PM said the deal did not have enough support to get through the Commons "as things stand".

Wednesday: This is when indicative votes will be held - we don't know yet whether MPs will be free to vote how they want or be directed along party lines. The prime minister is also due to address the 1922 Committee of Conservative backbenchers. MPs will also vote on changing the Brexit date in UK law from 29 March.

Thursday: A possible opportunity for meaningful vote three. The prime minister may hope that Brexiteers will finally decide to throw their weight behind her deal.

Friday: This is written into law as the day the UK leaves the EU, although the PM has said she will pass legislation this week to remove it. The earliest Brexit is likely to happen is now 12 April.