Hundreds of thousands of people have marched in central London calling for another EU referendum, as MPs search for a way out of the Brexit impasse. 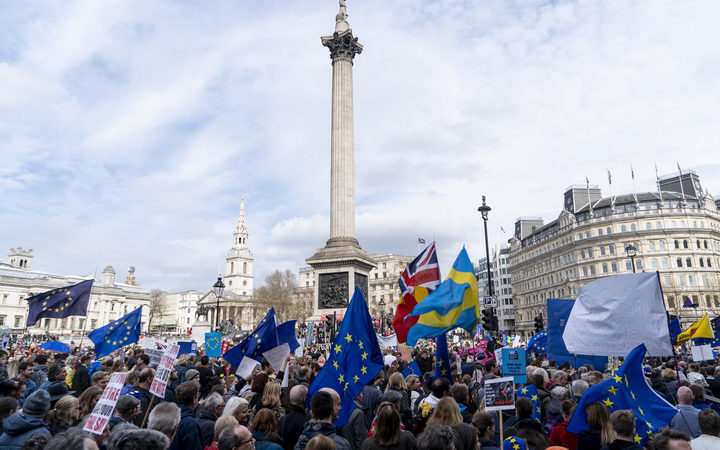 People hold up placards and European Union flags as they pass Trafalgar Square on a march and rally organised by the pro-European People's Vote campaign for a second EU referendum in central London. Photo: AFP

However, organisers of the "Put It To The People" campaign say more than a million people joined the march before rallying in front of Parliament.

It comes after the EU agreed to delay the UK's departure from the EU.

PM Theresa May is coming under pressure to quit after saying she might not put her Brexit deal to a third vote by MPs.

She wrote to all MPs on Friday saying she will ditch plans to put the deal to another so-called meaningful vote if not enough MPs support it.

Downing Street sources have denied reports in the Times newspaper that discussions are under way about a timetable for the prime minister to step down.

Unless her deal is passed by MPs, the UK will have to come up with an alternative plan or else face leaving without a deal on 12 April. 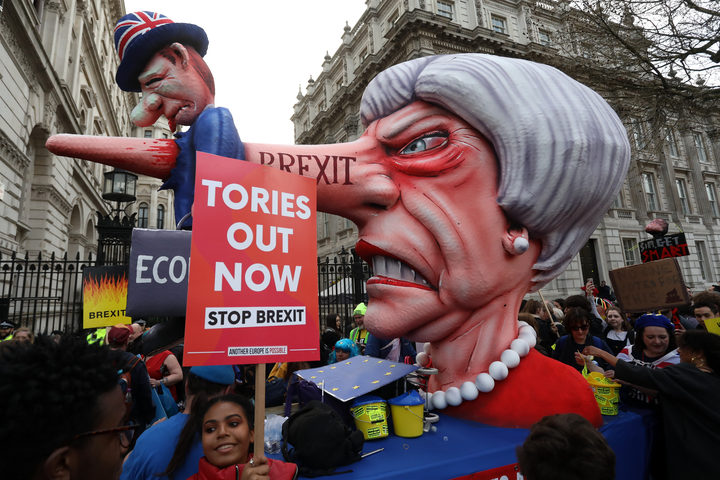 A puppet head of Britain's Prime Minister Theresa May spearing a representation of the British Economy is positioned on Whitehall outside Downing Street. Photo: AFP

Crowds at the rally were told the initial count showed more than a million people had turned up - putting it on a par with the biggest march of the century, the Stop the War march in 2003.

There was no independent verification of the numbers but BBC correspondent Richard Lister, who was at the scene, said it was a "very densely packed" protest and people were still arriving in Parliament Square five hours after the march began.

He said: "The organisers say it was one million-strong, it's very hard to verify those kinds of claims but this was a very significant march, well into the hundreds of thousands."