A week after the flooded Mozambican port of Beira was hit by Cyclone Idai, cases of cholera have been recorded, a humanitarian aid group said on Friday. 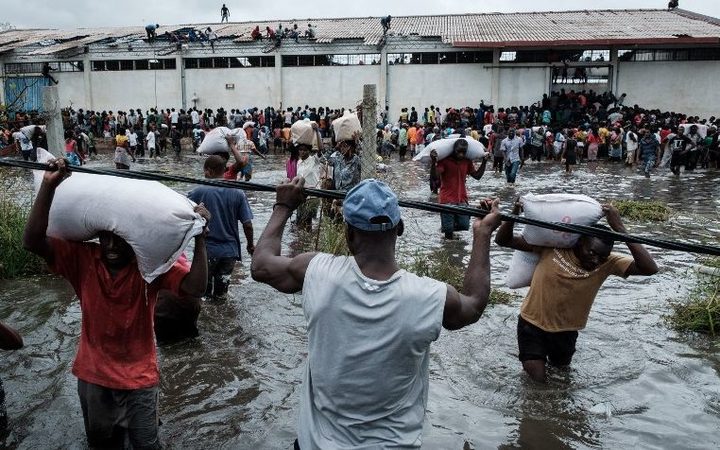 People wading through flood waters to loot sacks of rice in Beira. Cholera is endemic in Mozambique and is spread by water contaminated by sewage. Photo: AFP

The International Federation of Red Cross and Red Crescent Societies (IFRC) warned of the risk of other outbreaks, already noting an increase in malaria.

The storm has so far killed 557 people across Mozambique, Zimbabwe and Malawi, but the death toll is expected to rise.

Idai made landfall near Beira with 177km/h winds on 14 March.

Aid workers are slowly delivering relief but conditions are said to be extremely difficult, with some areas completely inaccessible and a scarcity of helicopters.

Some 1.7 million people are said to be affected across southern Africa, with no electricity or running water in areas where homes have been swept away and roads destroyed by the floods.

"There is growing concern among aid groups on the ground of potential disease outbreaks," the IFRC statement said. "Already, some cholera cases have been reported in Beira along with an increasing number of malaria infections among people trapped by the flooding."

Cholera, which is endemic in Mozambique, is spread by water contaminated by sewage, and can kill within hours if left untreated.

"There's stagnant water, it's not draining, decomposing bodies, lack of good hygiene and sanitation," Henrietta Fore, the head of Unicef who is in Mozambique, told AFP news agency.

"We are running out of time, it is at a critical point here," she said, warning that hygiene and safe drinking water were absolute priorities.

"The scale of this crisis is staggering," Elhadj As Sy, the head of the IFRC, said after seeing Beira, which was home to 500,000 people.

"We can't forget that it is an intimate and human crisis. Tens of thousands of families have lost everything. Children have lost parents. Communities have lost schools and clinics."

A spokesperson for the World Food Programme (WFP) said the aid effort was "slow to start, [but]... is now accelerating, thankfully."

"We are not yet where it needs to be," he told AFP.

The United Nations has released $20m from its emergency fund, and on Friday its chief made a personal appeal for more international support.

Aid groups said Mozambique has borne the brunt of flooding from rivers that flow downstream from neighbouring countries. At least 65,000 people are sheltering in 100 temporary sites, many of which are in "desperate conditions", according to the UN.

Many people are said to have not yet received emergency rations, with some still clinging to rooftops and trees.