A stranded motorist in Mozambique spent days trying to get from the port city of Beira to his home in Chimoio in the aftermath of Cyclone Idai, which has destroyed towns and villages in its path and left floods up to six metres deep. 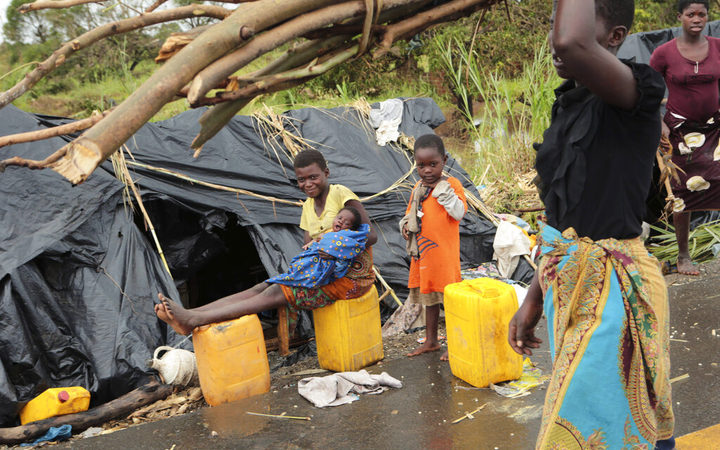 Survivors build a makeshift shelter near Nhamatanda about 50km from Beira, in Mozambique. Photo: AP

Graham Taylor, a Zimbabwean agriculture and forestry adviser who has lived in Mozambique's Manica province for 10 years, had gone to Beira a week ago to help his son with emergency repairs.

"I left Beira on Saturday at around 9am. About an hour and a half out going west to Chimoio, I encountered huge flood waters crossing this main newly built highway - vast amounts of water half a metre deep, six to seven kilometres wide.

"I managed to get through this and reached a little sugar town called Lamego. It was here that I became stranded, as ahead it turned out was a further 7km of flooded road, and where I witnessed the most horrific scene.

"About 95 percent of the houses had been levelled and destroyed, especially those constructed out of poles and mud. If there was a roof remaining, people were on it. There were people on rooftops and trees - families, kids and babies on trees as far as the eye could see.

"For two full days there was absolutely no sign of any assistance anywhere, except for one young white gentleman who lived in Lamego. He may have been with the American Peace Corps.

"He had managed to get two 100m length ropes and a lot of empty 20-litre yellow plastic bottles, the containers in which cooking oil is sold.

"He threaded a rope through the handle of the bottles and, using a little boat made of tree bark, he took the rope to a building, tied it to a window frame and then the people climbed out of the building and held on to the floating rope.

"He had 10 people working with him and they ushered people along these two ropes in the water. Once the people were off that building, they would take the rope to a tree or another building - a slow process until they reached safety.

"For a solid 48 hours while I was there, they never stopped working - throughout the night, they had the vehicle lights shining on the rope and the people. It was a human train of people being ushered and assisted to safety. He did a fantastic job." 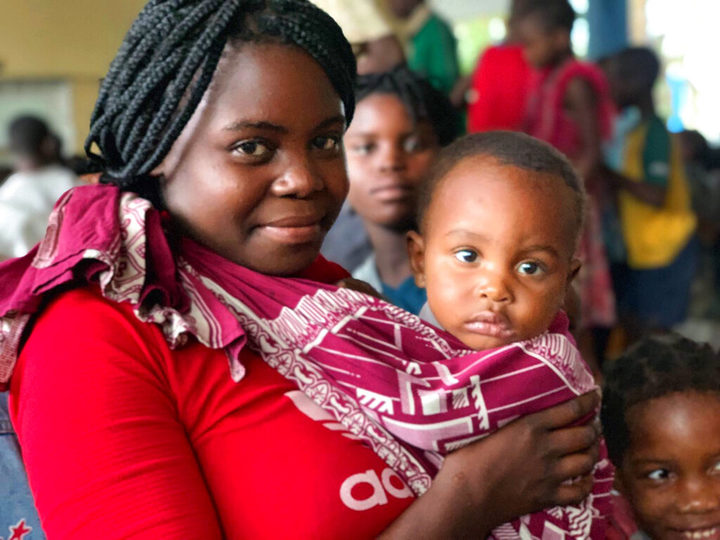 A mother and child wait for food in Beira. Their home was badly damaged by Cyclone Idai. Photo: AP

Mr Taylor said his biggest concern was the remaining 200 sq km of flood plain heading in the direction of the Buzi and the Pungwe rivers - that's where most communities live on the banks of the river.

"The depth of the water by the road was 3m-4m deep - flowing water. In the distance there was just the most enormous volume of water - a lake, it's just too big to comprehend." 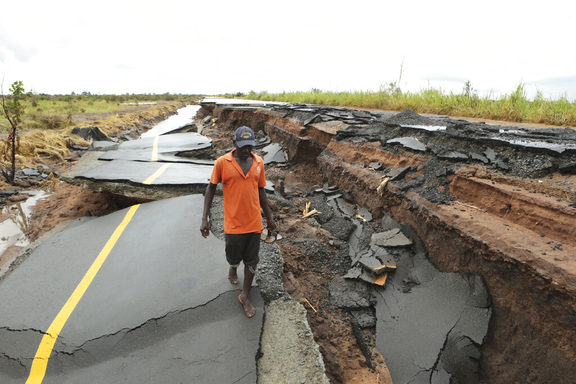 A man walks alongside a damaged road near Beira. Photo: AP

He said he tried to get back to Beira but the road was washed out. After two days, two Zimbabwean truck drivers who were also stranded accompanied Mr Taylor and hundreds of other members of the local community as they began walking in the hopes of reaching safety.

"As we walked using a torch on our cellphones, we heard crying and sobbing continually for a solid 10km to 15km stretch. People were mourning as dead bodies were being washed up against the side of the road. We approximated between us that we saw between 200 and 350 bodies, including children - it was really sad.

"When I saw that, I just said to myself: 'How many more people are dead way inland?'"

"Surprisingly, we met quite a number of families coming back looking for missing relatives."

Mr Taylor saw things that humbled him. "Elderly ladies carrying their husbands for kilometres through flood water - that's physically demanding - and how everyone was helping everyone.

"We were talking to people along the road, and asking: 'Why are you still staying here?' And they would say: 'No, I'm waiting. I'm missing family. I'm looking for the bodies'."

After seven hours Mr Taylor and his group reached a small town, where he managed to use local buses to reach Chimoio.

He said he spoke to a 90-year-old man who said floods of this scale had never happened in his lifetime.

"There is massive deforestation taking place in Mozambique now and this is part of the cause of the problem. Also rural communities cultivate and have vegetable gardens right on the banks of the river and in the river beds. There needs to be projects funded that use solar-powered drip irrigation schemes that can work 100m or 50m away from the river.

"These are the challenges for the future."