The US's new commercial astronaut capsule has completed its demonstration flight with a successful splashdown in the Atlantic Ocean. 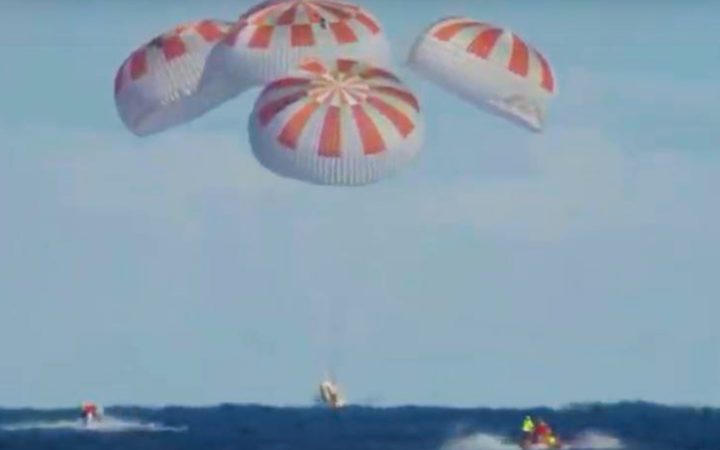 The SpaceX Dragon vehicle left the International Space Station after being docked there for the past week, and re-entered Earth's atmosphere.

It had a heat-shield to protect it from the high temperatures of re-entry.

Four parachutes brought it into "soft contact" with water about 450km from Cape Canaveral, Florida.

The mission - which had no humans aboard, only a dummy covered in sensors - went according to plan.

The Dragon has set the stage for the US space agency Nasa to approve the vehicle for crewed flights.

Not since the end of the Space Shuttle programme has the US been able to send its own astronauts into orbit. It has had to rely instead on Russia and its Soyuz spacecraft, launching from Baikonur Cosmodrome in Kazakhstan.

Nasa hopes to bring this near-eight year gap in capability to an end with the introduction of two new commercial transportation systems - the Dragon and another vehicle being developed by aerospace giant Boeing.

The first crewed flight of the Dragon could occur as soon as July, although this target date is likely to slip into the summer as engineers work through the post-flight analysis.

Splashdown occurred at about 8.45am local time. A boat, called GO Searcher, was waiting to recover the capsule. There were cheers at mission control as the capsule landed in the Atlantic.

Dragon's owner, SpaceX chief executive Elon Musk, had previously expressed some anxiety about how the capsule would cope with re-entry, given that the vehicle's backshell, or heatshield, has a somewhat irregular shape that could lead to a roll instability at hypersonic speeds.

The director of crew mission management at Space X, Benjamin Reed, spoke to Nasa TV moments after the capsule splashed down.

"It was an incredible journey to get to this moment," he said.

"The teams have just done an amazing job - both the Space X and the Nasa teams jointly.

"I can't believe how well the whole mission has gone. Pretty much everything at every point, everything's been nailed all the way."

Nasa has seed-funded Boeing to produce a capsule of its own called the Starliner.

This vehicle is scheduled to have its uncrewed demonstration flight in April or soon after.

Ultimately, Nasa will be purchasing seats in both the SpaceX and Boeing systems to take its astronauts to the ISS. But the commercial nature of the relationship means the companies will be free to sell rides to secondary customers.

These will no doubt include the space agencies of other nations, but perhaps some private space companies and individuals too.

"We're driving down costs for low-Earth orbit; we're commercialising low-Earth orbit … with human activities where Nasa can be a customer. And then we can use the tax-payer resources that are bestowed upon us to do exploration, to go further, to go back to the Moon sustainably," said Nasa chief Jim Bridenstine.

"We want to stay at the Moon and ultimately go on to Mars."

Nasa has already selected its first astronauts to fly aboard a crewed Dragon. They are Bob Behnken and Doug Hurley.

"We have a significant amount of training we need to go through that will walk through all the various phases of flight," Behnken said of the coming months.

This will include understanding what to do if there is an emergency during their mission.

One problem that could occur is a failure of the Dragon's carrier rocket during the ascent to orbit.

The demonstration capsule's lift-off last Saturday was picture perfect, but some kind of booster anomaly can never be discounted.

In such a scenario, a Dragon's powerful thrusters would push it away from the launcher to safety.

The team plans to take the current Dragon after its return and put it on another rocket and launch it out of the Kennedy Space Center. A minute into this flight, a deliberate abort will be commanded.

The timing is significant because it's when the vehicle is experiencing maximum aerodynamic pressure.

If the Dragon can stably depart in such circumstances, it ought be able to handle an escape at any stage in a flight.

As with the present demo, no one will be aboard for this hazardous test.