The US is about to take a major step towards being able to fly its astronauts into space once again. 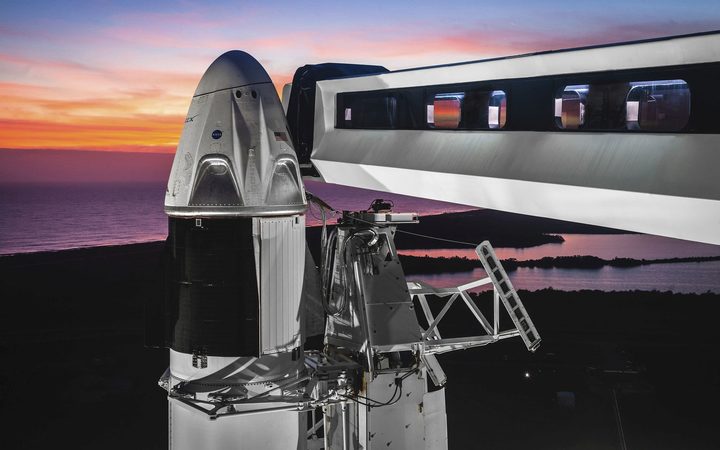 The Dragon crew capsule atop a Falcon 9 rocket at the launch pad at Kennedy Space Center in Florida. Photo: AP

California's SpaceX firm is performing a demonstration of a new rocket and capsule system, which, if it works well, will be approved to carry people.

Routine crew missions to the space station could start later this year.

Not since the retirement of the shuttles in 2011 has America been able to put humans in orbit. It's had to pay to use Russian Soyuz vehicles instead.

The launch will occur from the historic Pad 39A where Apollo left for the Moon and Atlantis began the very last shuttle ascent.

Who is this character Ripley?

Because this is just a demonstration, there are no astronauts aboard - but there will be a space-suited mannequin.

This test dummy, nicknamed Ripley after the Sigourney Weaver character in the Alien movies, will be covered in sensors.

These will record the forces and the environment experienced inside the capsule.

For SpaceX, this flight is a key milestone in its 17-year history. It was set up by entrepreneur Elon Musk with the specific intention of taking people beyond Earth.

"There is nothing more important for us than this endeavour, and we really appreciate the opportunity from Nasa to do this."

The Falcon rocket is the same vehicle the company uses to loft cargo to the International Space Station and to put satellites in orbit. It's gone through many iterations down the years and now has an extensive flight history.

The crew capsule is based on the ISS cargo freighter but incorporates life-support systems and more powerful thrusters to push the vessel to safety if something goes wrong with the rocket. It also has four parachutes instead of the freighter's three to control the descent to Earth.

Dragon crew capsules will splashdown in the Atlantic not far from Kennedy.

How has Nasa changed since the shuttle? 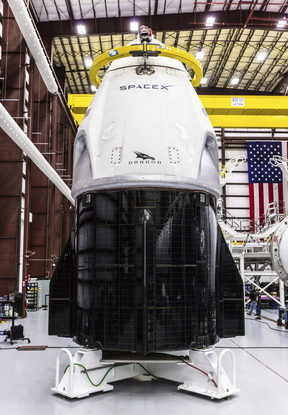 The American space agency is essentially now contracting out crew transport to SpaceX.

Whereas in the past, Nasa engineers would have top-down control of all aspects of vehicle design and the agency would own and operate the hardware - the relationship with industry has been put on a completely new footing.

Today, Nasa sets broad requirements and industry is given plenty of latitude in how it meets those demands.

Agency officials still check off every step, but the approach is regarded as faster, more efficient and less costly.

"I fully expect we're going to learn something on this flight," said Bill Gerstenmaier, Nasa's head of human spaceflight.

"I guarantee that not everything will work exactly right. That's cool. That's exactly what we want to do.

"We want to maximise our learning so we can get this stuff ready so that when we put crew on, we're ready to go do a real crew mission, and it'll be the right safety for our crews."

How should this mission play out?

Launch is much like any other SpaceX mission. The rocket lifts off and after a couple of minutes, it performs a stage separation.

The lower Falcon segment comes back to Earth to land on a drone ship, and the upper-stage pushes on to orbit.

Eleven minutes into the flight, the Dragon is let go and must make its own way to the station.

SpaceX and @NASA have completed thousands of hours of tests, analyses, and reviews in preparation for Crew Dragon’s first test flight to the @space_station pic.twitter.com/JvJqeoLKVy

One of the big differences between this mission and standard cargo flights is the mode of approach and attachment to the ISS. Freighters come up under the orbiting lab and are grappled by a robotic arm and pulled into a berthing position.

On this occasion, we will see the crew version of Dragon approach the station at the bow and dock automatically, using a new design of connection ring. Arrival is set for 11:00 GMT on Sunday.

ISS astronauts will be watching closely to see that the capsule behaves as it should.

The Dragon is expected to stay at the station until Friday. The current plan has it undocking, firing its thrusters to come out of orbit, and splashing down at roughly 13:45 GMT.

Kirk Shireman, manager of Nasa's International Space Station programme, said: "You'll hear us talk about this being a flight test; it absolutely is. Although, we view it also as a real mission, a very critical mission.

"The ISS still has three people onboard so this mission coming up to the ISS for the first time has to work; it has to work."

Nasa is also working with Boeing on crew transport. The company has developed a capsule of its own called the Starliner. This will have its equivalent demo flight in the next couple of months.