France's most senior Roman Catholic cleric, the cardinal Philippe Barbarin, has been given a six-month suspended sentence for his role in covering up the sexual abuse of minors. 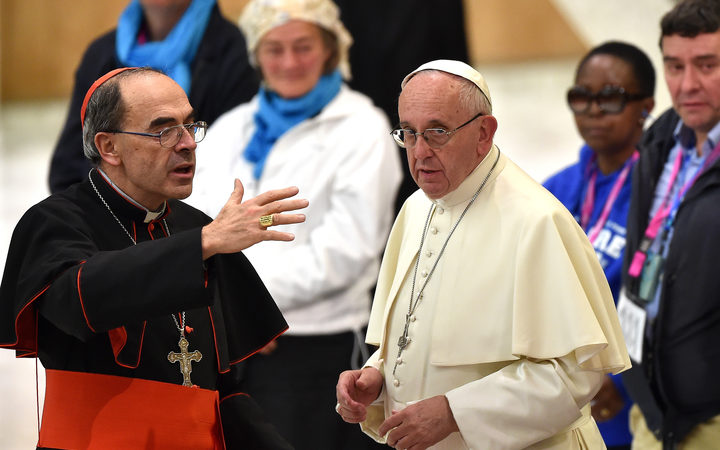 Pope Francis (R) listens to French Cardinal Philippe Barbarin, who was convicted for his role in covering up the sexual abuse of minors. Photo: Photo / AFP

Barbarin was found guilty of failing to report allegations of assaults by a priest in the 1980s and 1990s.

He denied the charges. His lawyers now say he will appeal against the verdict.

Barbarin's sentencing comes as the Catholic Church reckons with a new wave of abuse scandals.

Barbarin, who held the position of Archbishop of Lyon, was not present for the verdict. During the trial, he told the court: "I cannot see what I am guilty of. I never tried to hide, let alone cover up these horrible facts."

The claims relate to alleged abuses committed by priest Bernard Preynat, who is now 73 and who ran a boy-scout group in the Lyon area for many years. Dozens of men say he sexually assaulted them as children.

Mr Preynat lawyer's has said his client has admitted the allegations, but that the statute of limitations had expired. French officials argue that some of the offences can still be prosecuted and a criminal case has been opened against the priest.

Some of Mr Preynat's alleged victims took action against Barbarin and five others over their inaction. They used provisions in French law to bring a private prosecution, bypassing the prosecutor's office, which had not pursued the case against the cardinal.

Barbarin told the trial he had known of "rumours" as far back as 2010. But he said he became aware of the alleged abuse after a conversation with one of the victims in 2014. He informed the Vatican about the allegations, and removed Mr Preynat from his position a year later - but never informed police.

The allegations became public in 2015 and are now the subject of a film titled Grace of God, which was cleared for release last month after a legal battle.

French broadcaster BFMTV described the case as "the first major trial of paedophile in the French Catholic Church".

The conviction comes amid a number of other Catholic scandals around the world.

Two weeks ago, Australia's most senior cleric, Cardinal George Pell - someone once widely seen as the Church's third-most powerful official - was found guilty of abusing children.

An Australian jury found Pell had abused two choir boys in Melbourne's cathedral in 1996. He is now appealing that verdict.

Pope Francis last month convened a conference on the sexual abuse of children in the Catholic church. He called for "concrete measures" to tackle the problem rather than "simple and obvious condemnations", and labelled abusers "tools of Satan".

Critics say that little concrete action has been taken by the Church.