Cardinal George Pell, the most senior Catholic clergyman worldwide to be convicted of child sex offences, has had his bail revoked in the County Court in Melbourne. 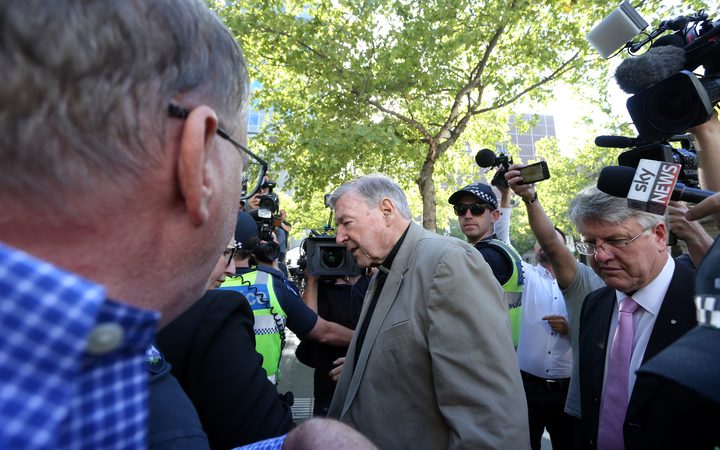 Pell makes his way through media as he arrives at court in Melbourne today for a sentence plea hearing. Photo: AFP

Pell - a former top adviser to Pope Francis - was in December found guilty of five charges of child sexual offences committed more than two decades ago against 13-year-old boys. The verdict was made public yesterday after prosecutors dropped a second abuse case against Pell.

Pell denies the allegations and lawyers have lodged an appeal, which if successful could lead to a retrial.

Pell was returned to court in Melbourne today where the judge heard arguments on a prison sentence.

He's been remanded in custody for the first time and will be sentenced on 13 March.

"Goodbye you creep," a woman called out as Pell walked from the dock and into custody accompanied by corrections officers.

Pell faced a plea hearing in the Victorian County Court following his conviction on five charges relating to the sexual abuse of two choirboys in Melbourne's St Patrick's Cathedral dating back to 1996.

"These acts … were, in our submission, humiliating and degrading towards each boy and gave rise to distress in each boy," he said.

"There has been a breach of trust in this case in the sense that Cardinal Pell was the driving force and in charge of this cathedral and these two choristers were a cog in the cathedral wheel ... in Sunday masses."

Mr Gibson said Pell had displayed a "degree of callous indifference" by continuing his attack on the boys despite their protests.

Pell's barrister Robert Richter QC said the crimes were "no more than a plain vanilla sexual penetration case where the child is not volunteering or actively participating".

But Judge Peter Kidd said that he did view it as a "serious example of this kind of offending", and that the objective fact was that it was a "forcible, blatant attack on two boys".

"I see this as callous, brazen offending … he did have in his mind some sense of impunity," he said.

The Catholic church is under mounting pressure to deal with a growing child sexual abuse crisis, following scandals in the United States, Chile, Germany and Australia.

The pope ended a conference on sexual abuse on Sunday, calling for an "all out battle" against a crime that should be "erased from the face of the earth".

The father of one of his victims - a former choir boy who died of a heroin overdose - has indicated he plans to sue the church, the ABC reported.

Pell was convicted on the evidence of one of his two victims. The other died in 2014.

The father of the victim who died has engaged a law firm for a possible civil claim against the Catholic Church.

Pell was convicted last December of abusing the two members of the St Patrick's Cathedral choir in 1996 after a Sunday church service, one of the first since Pell had been appointed archbishop of Melbourne.

In the Vatican's first response, spokesman Alessandro Gisotti told reporters the conviction was "painful" for many but that the cardinal had proclaimed his innocence and had the right to "defend himself until last level" of judicial process.

He said the church was committed "to do everything possible so that the church might be a safe home for all, especially for children and the most vulnerable".

"We now await the outcome of the appeal trial, recalling that Cardinal Pell has reaffirmed his innocence and has the right to defend himself to the last degree," he said.

At a morning briefing, Gisotti said Pell's five-year term as Vatican economy minister had expired on 24 February. In a tweet late on Tuesday night, Gisotti said Pell "is no longer the Prefect of the Secretariat for the Economy".