Five buildings have been destroyed in bushfires burning out of control in eastern Victoria in Australia. 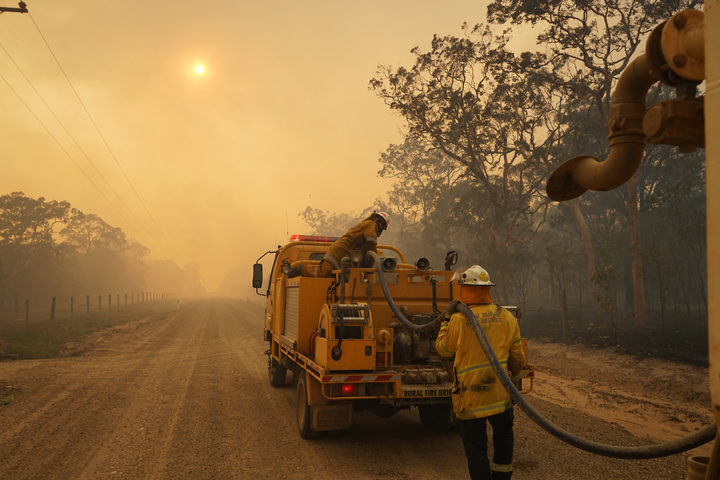 More than 30 fires are burning across the state of Victoria in Australia (file photo). Photo: AFP

The north-westerly wind is expected to strengthen which will result in "active and dynamic" fire activity, the Country Fire Authority said, until a shallow cool change crosses the state.

There are currently 30 fires burning across the state. Fifteen of them are in eastern Victoria.

Emergency Management Commissioner Andrew Crisp implored people in the path of the fires to stay safe and to heed the warnings.

"It's a dangerous time, putting it bluntly, not just for communities but for firefighters," he said.

"Fire and emergency services are doing everything we can in relation to this particular fire under very trying circumstances.

"This is an active fire. It is moving and there is every likelihood there will be more fire losses."

Three buildings have been destroyed by the Bunyip fire, including two homes in the Garfield North area, near the Bunyip State Park, south-east of Melbourne.

The latest fire emergency warnings for the Bunyip blaze cover a large area and take in about 30 communities including Bunyip, Cornucopia, Garfield, Garfield North, Gentle Annie, Labertouche, Drouin and Jindivick.

Up to 850 people, 120 fire trucks and 20 aircraft will be working on the Bunyip blaze today.

The fire has already burned through almost 6300 hectares.

Earlier, evacuation orders were issued for some communities, but it may now be too late to leave as the prevailing fire conditions are expected to move the fire south-easterly under the influence of a north-westerly wind.

Telephone alert emergency warnings have been sent out to communities in the area between the southern end of the Bunyip State Park and Gippsland rail line.

At last report the fire had impacted on the Princes Freeway, Mr Crisp said.

"It's been moving in a south-westerly direction basically, towards the Princes Highway and … my last advice is it is at the highway itself," he said.

"So that means it has impacted on a number of communities in that Garfield area."

Another two buildings were destroyed by the fire at Budgeree and Yinnar South, south of Morwell, fire officials said.

Another emergency warning issued at 9am Australian time remains current for the other main fire at Budgeree and Yinnar South.

Firefighters are going into the affected areas this morning to confirm the losses.

Senior forecaster at the Bureau of Meteorology Dean Stewart said temperatures would climb into the high 30s today and there was a risk thunderstorms could produce lightning strikes.

He said northerly winds were strengthening around all fire fronts.

"We're looking at those winds in the Bunyip fire getting up to 30 to 40 kilometres per hour later this morning, with possible gusts as high as 50 to 55km per hour.

"So with those sort of winds and the high temperatures, it will be another challenging day for the fire authorities."

The change is not expected to hit the Bunyip fire until late this afternoon.

"It will bring its own challenges. We will see some increased wind," he said.

"What we've got now is the eastern flank, when the change comes it becomes the front of the fire, so it will push back up into that north-easterly direction."

Mr Crisp said the battle to fight the fires would likely continue for a number of days.

"We've got a tough day today but it doesn't finish today," he said.

"The change is quite shallow and we'll still see warmer temperatures… again tomorrow.

"In fact we've probably got no relief until Wednesday, when there's some rain that's forecast. But we've got to get through today."

Other fires continue to burn near Dargo and Black Snake Creek, in the state's far east, and at Licola in the Alpine National Park where watch and act messages are current.