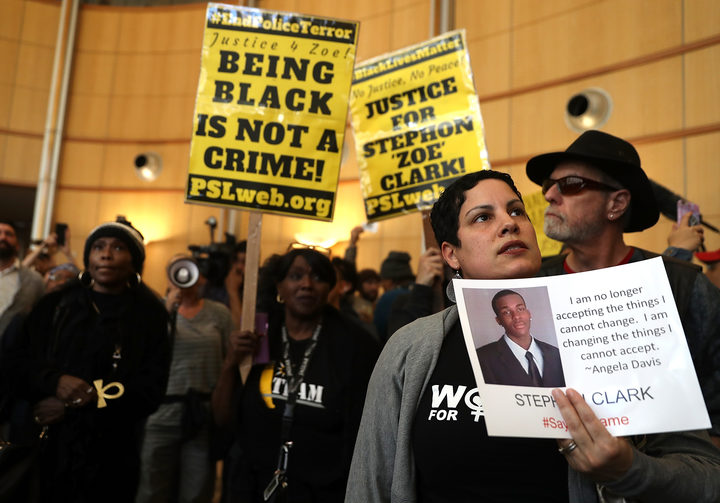 The shooting victim, aged 22, was shot at least seven times in his grandmother's backyard in Sacramento.

According to the district attorney, the officers, who were investigating nearby break-ins, did not commit a crime.

The death sparked protests and fuelled national anger over police use of force, particularly against black men.

"There is no question a human being died," District Attorney Anne Marie Schubert told reporters after making an apology to the Clark family.

She said that a months-long investigation into the 18 March 2018 shooting had looked into whether a crime was committed.

"The answer to that question is no and, as a result, there was no criminal liability," Ms Schubert said.

The use of force was justified because the officers had feared for their lives, believing Mr Clark was armed with a gun and had allegedly moved towards the officers, she said.

Police body camera and helicopter footage later revealed the officers fired 20 times at Mr Clark, who was then found with only an iPhone.

They waited five minutes before giving him aid.

The officers, who were put on leave last year, have not been named by authorities over fears for their safety.

Sacramento's police chief Daniel Hahn announced that the department would conduct its own investigation and, depending on the findings, the officers could be fired.