An unarmed US man killed by police this month was shot seven times in the back, according to an independent post-mortem examination. 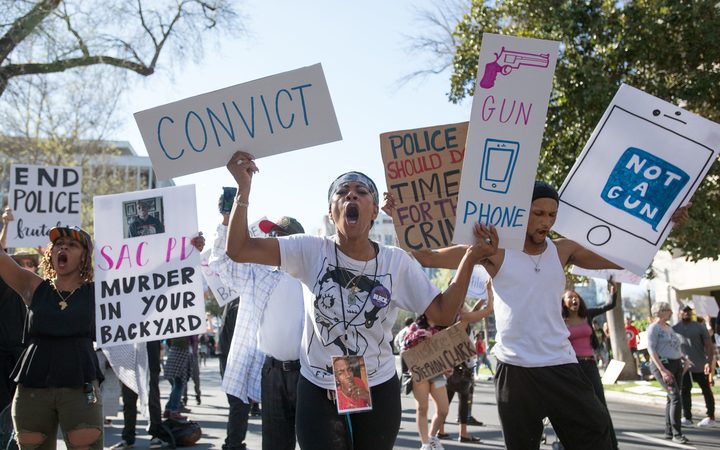 Stephon Clark was shot a total of eight times in the confrontation on the night of 18 March in Sacramento, California, said a forensic pathologist.

Dr Bennet Omalu said seven of the bullets entered the 22-year-old father-of-two's back and side.

He was holding a mobile phone, which police said they mistook for a gun.

His death has sparked city-wide protests.

Dr Omalu said Clark was also hit in the neck and thigh, and one shot resulted in a punctured lung.

Authorities said that each officer fired 10 times. Any one of the eight bullets that struck Clark could have proved fatal, Dr Omalu said.

"His death wasn't instantaneous," Dr Omalu said at a news conference on Friday.

It took him three to 10 minutes to bleed to death.

Dr Omalu said the seventh gunshot wound was to the side of his body, towards the back.

He said: "You can reasonably conclude he received seven gunshot wounds from his back." 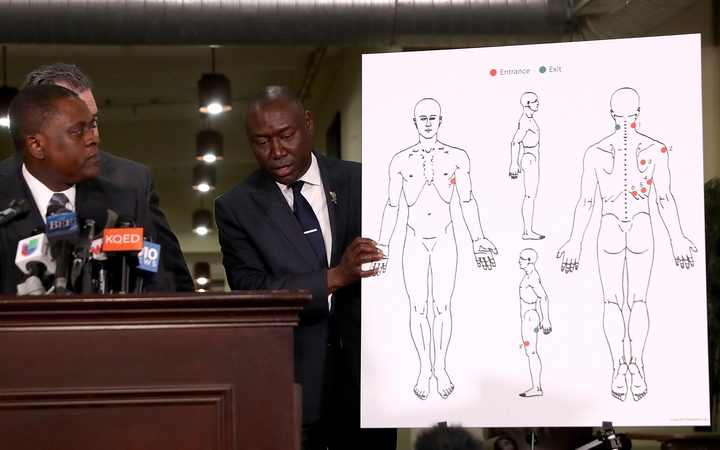 Sacramento police said the officers were responding to reports of a thief who damaged three vehicles in the neighbourhood.

The suspect was seen from a helicopter breaking the glass door of a house before hopping over a fence next door.

The officers confronted Clark in his grandmother's backyard.

Body camera footage shows it was dark as they ordered him to show his hands before opening fire after shouting: "Gun, gun, gun!"

The video shows the officers stayed at a distance weapons drawn and pointing at the victim until backup arrived.

While discussing whether to perform CPR, one officer said: "Hey, mute." The audio went silent for two minutes.

Clark's family and their lawyer are questioning why he did not receive more immediate medical care. They are expected to file a federal lawsuit.

"These findings from the independent autopsy contradict the police narrative that we've been told," said Benjamin Crump, the family's lawyer.

"This independent autopsy affirms that Stephon was not a threat to police and was slain in another senseless police killing under increasingly questionable circumstances."

Mr Crump said the post-mortem findings meant the officer's story about Clark moving towards them in a threatening manner could not be true.

Hundreds of mourners attended Clark's funeral on Thursday as demonstrators took to the streets.

On Tuesday, his brother, Stevonte Clark, stormed a city council meeting with protesters and said the authorities had "failed all of you".